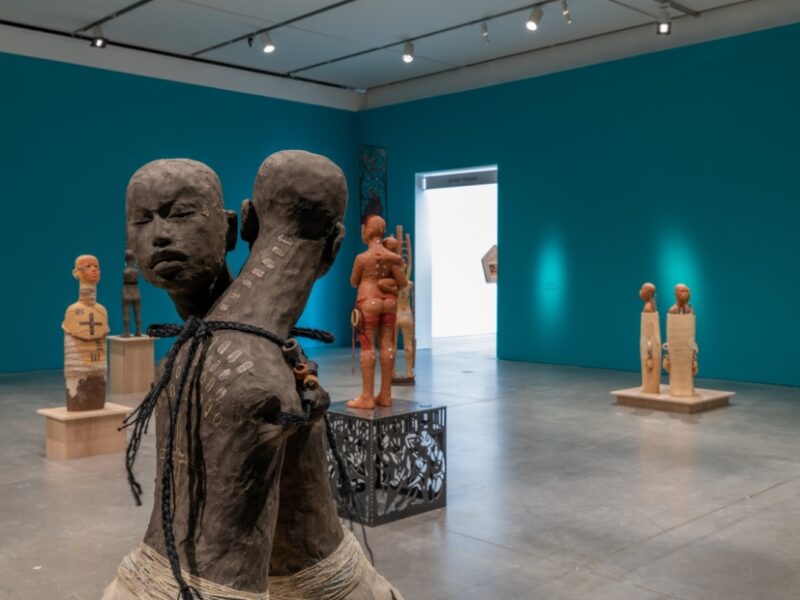 A darkened atmosphere pervades Rose B. Simpson’s solo exhibition ‘Legacies’ at ICA/Boston, like a cloudy sky calling for rain. Figurative clay sculptures appear on raised platforms in the open gallery. Their resemblances disclose familial relations amongst those in the room and, as the title of the exhibition suggests, to relatives beyond. Simpson herself comes from a long line of accomplished ceramicists from Santa Clara Pueblo in New Mexico, including her mother, Roxanne Swentzell, her late grandmother, Rina Swentzell and her late great-grandmother, Rose Naranjo. 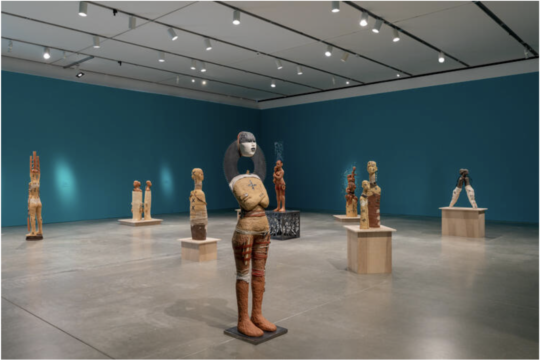 Although Simpson’s sculptures are personal, reflective of her experience both as a parent and a Tewa woman, they are without specific autobiographical or spiritual references. The markings that run up and down the figures are intentionally inscrutable, forming part of the artist’s unique symbology. Despite these guarded signifiers, Simpson’s work is forthright in her critique of ongoing settler colonialism. The Remembering (2020) evokes the trauma inflicted at Native American boarding schools. Three sculpted children are bound with sharpened sticks at their chins. Their hands, modelled out of a smoother and lighter clay, are attached by metal links — as if to suggest their compromised agency under conditions of forced assimilation. The crisis of missing and murdered Indigenous women and girls is addressed in Genesis Squared (2019), where mother and child appear together beneath the protective rays of a tablita. The laser-cut steel cube at the base of the work features silhouettes of defensive postures that are barb-like in their detail, sharply contrasted by the gentle impressions left by Simpson’s hands on the ceramic elements that stand above it. The artist’s various treatments of clay – a substance that can be both durable and vulnerable – convey the qualities of transformed strength. 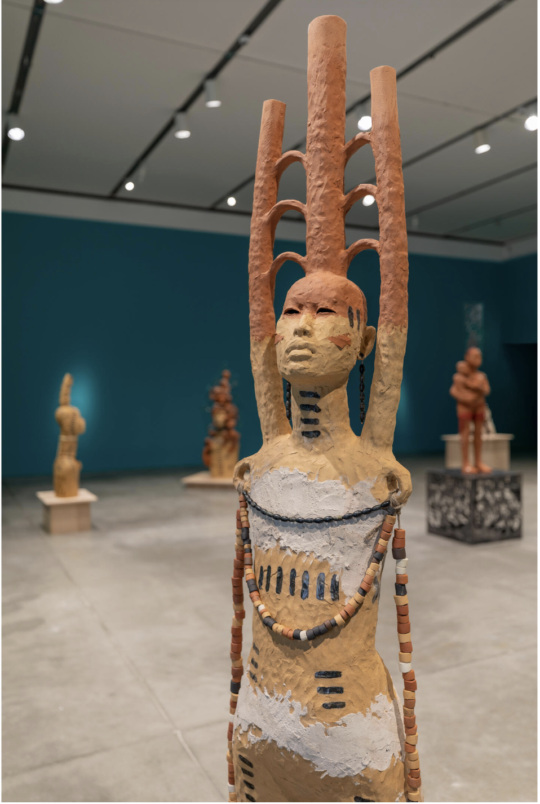 The appearance of power in Simpson’s work has undergone a shift in the past few years. Directed South (2014), the earliest figure on view in the exhibition, is distinct — clad in a heavy armour of thick leather bands and chunky unglazed beads. In more recent works, Simpson’s use of sculptural artillery is less obvious, placing emphasis on structural considerations. In Brace (2022), two figures are pitched forward chest-to-chest. Their elongated necks tenderly touch, stabilizing one another, and their shoulders, which resemble lug handles, are tied with twine. In Truss (2021), a solitary figure balances on a metal brake drum while cylindrical spouts reach skyward from their head and shoulders. One of the few literal references to Simpson’s training as an auto mechanic, the work also imparts her skillfulness in construction. A truss improves load-bearing through triangular assemblies of beams, but here Simpson’s curvilinear design is closer to an aqueduct. Whereas the artist’s earlier works were armed for protection, these newer figures carry force. 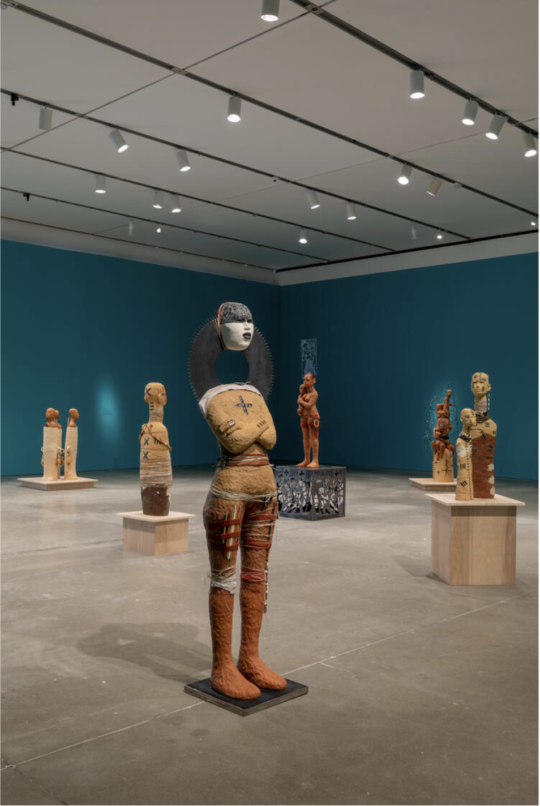 The relationships conveyed by Simpson’s sculptures in ‘Legacies’ demonstrate the power of extended community and kin. The artist often twins her figures, a difficult task given that she works primarily with hand-coiled clay instead of moulds. Over time, some of these couples – by design or circumstance – become separated. The companion of Root A (2019), for instance, is missing from this installation. Absent figures like this one create a tether to beings and places beyond, and also affirm the significance of pottery as a means to articulate relations in the social world. Simpson’s treatment of the hollow interiors of the figures makes space for other forms of interconnectedness. Openings in the clay are necessary during the firing process, but for the artist they also serve as thresholds for intersecting realities – perhaps most directly represented by the ascending heads in Reincarnation II (2021). Simpson has often described the feeling of watching her figures ‘wake up’ as they take shape – by extension, so too might those who find themselves in their presence.

‘Rose B. Simpson: Legacies’ is on view at ICA/Boston through 29 January 2023. More information here