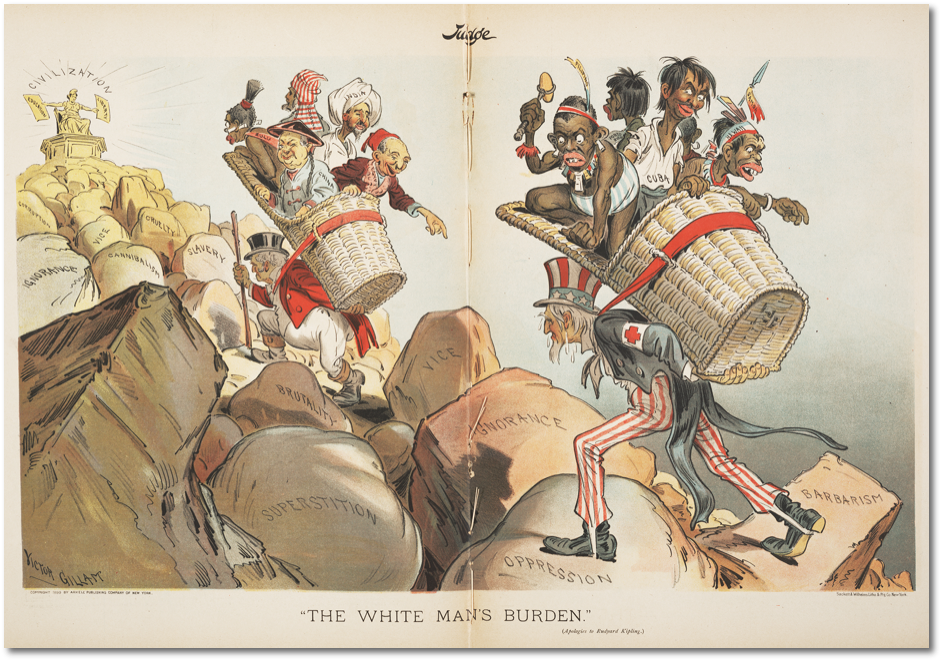 ‘White man’s burden’ (noun): a duty formerly asserted by white people to manage the affairs of non-white people whom they believed to be less developed

This illustration titled ‘The white man’s burden’ is by Frederick Victor Gillam, an American political cartoonist.

The cartoon was inspired by Rudyard Kipling’s poem, “The White Man’s Burden” (Feb. 4, 1899), a rally cry to Americans, as the U.S. waged war against Filipino insurgents, the British writer and poet urged the Americans to take up “the white man’s burden.”

Kipling’s poem asserts that it is the moral duty of the nations of the West to bring civilisation to the less enlightened populace of the South and East, as Kipling put it, “Your new-caught, sullen peoples, /Half devil and half child.”

At the time of its publication the U.S. Senate was debating ratification of the Treaty of Paris, negotiated by Spain and the U.S. to end the Spanish-American War; a major clause of the treaty would have turned over government of the 10m people of the Philippines, who were judged “uncivilised”.

Kipling favoured Philippine annexation, and sent a copy of the poem to Theodore Roosevelt, then governor of New York. The phrase “the white man’s burden,” however, was not Kipling’s coinage. The earliest known occurrence appears in the Methodist newspaper The Southern Christian Advocate for Sept. 21, 1865.

Just like the term ‘white saviour’ it is a critical description of a white person’s need and desire to liberate, rescue or uplift non-white people; it is critical in the sense that it describes a pattern in which non-whites are in economically underdeveloped nations and need to be civilised, denying them any agency, rather they are seen as passive recipients of white benevolence.

I find it ironic that white people encountered advanced civilisations when they first trespassed on the continent of Africa and other indigenous lands. In their shock and disbelief, they decided not to learn or trade, but instead to pillage and plunder all natural resources, commit heinous acts of genocide, and attempt to destroy all cultural assets.

As we emerge out of colonialism, they still need our land and labour. So, the real question is, who saved who?