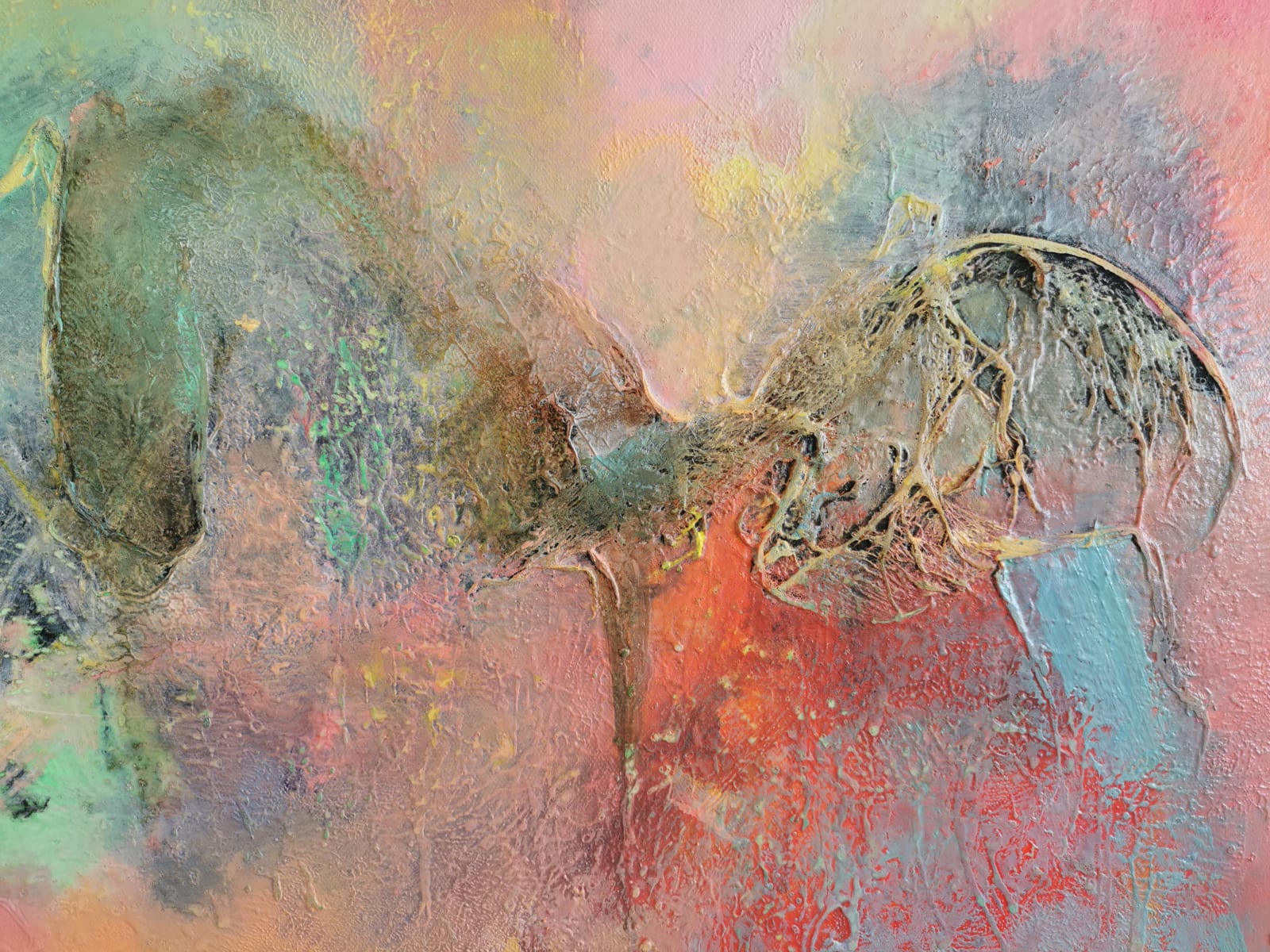 I’m a huge fan of the creative arts, whatever the medium, from writing, music, fine and digital art to cinematic, photography and performance art. Any chance I get, the kids and I are off to an exhibition, the movies, ballet, theatre or a museum – art has the ability to transport us emotionally, as well as transition us intellectually. When I engage with art, it’s impact is simultaneously visceral and cerebral.

So, as Women’s History Month comes to a close, I want to spotlight the work of Black female artists that you may not have heard of, or overlooked. Over the last few weeks I’ve been in conversation with Edo Ndeke Co-Founder, Commercial and Project Manager of Demif Gallery – about showcasing their work, discovering the inspiration behind the collections and bringing to the fore, the driving force behind each Woman’s artistry.

Dimbeng, was born in Abidjan in 1968. After living in Austria, she moved to Paris in 1986 where she studied Interior Architecture at the École Supérieure des Arts Modernes. In 1999, after some professional experience, notably in the parisian boutique of Paloma Picasso, she decided to return to art by devoting herself fully to painting, and specialised in mixed media with the Ivorian plastic artist Valérie N’dri Gervais (1970-2006), who won first Prize at the annual exhibition of the Art Students League of New York, and Prix du Merit at the annual “Manhattan Art International” competition.

She created her own painting technique called Mixed Art Relief, based on the fusion of colors, coating and organic material, such as tapa (bark cloth), or raffia, which gradually reveals abstract or figurative forms. This technique is halfway between Mixed Media and Vohou Vohou, an Ivorian artistic movement of the 1970s.

The composition of the coating, the sanding of texture and the technique of sfumato, gives a new dimension to Mixed Art Relief, thanks to the blurring of the contours that creates a link between the forms, thus offering a harmony between texture and color. For Dimbeng, this technique favours intercultural dialogue by connecting the painter’s original culture with the individuals adopted or passing territories.

The fabric of her body of work covers themes relating to: the woman, the caring relationship to nature, human relations through travel and encounters, African spirituality and its contribution to humanity. She devoted 3 series to women through the “Gyneaceum” which she defines as a feminine space inviting women to define themselves in order to participate in the construction of the world, and to meet in a principle of sorority, sharing knowledge and the initiation to family, pleasure, sexuality and the power to give birth.

Dimbeng’s works have been exhibited at UNESCO, the Kino Kino Museum in Sandnes, in Vilnius City Hall, and the Egg Art Studio gallery in New Delhi. Her work can be found in private collections in Europe, notably in France, Lithuania and Austria, Africa, Ivory Coast, Cameroon and South Africa, as well as in Canada and India. Dimbeng is a member of the International Association of Arts, IAA, a UNESCO partner, and a member of the French National Council of Plastic Arts, CNFAP.

How do Women influence your work?

Women are important to me because they are the victim of all kinds of discrimination, despite the fact that they are the only ones who have the power to give life. The way Women are percieved especially Black Women, has changed over time. It is therefore important for me to promote the Black Woman’s identity, to express what is often denied to them as their place in society, their aspirations, their pleasures and sexuality.

Do you have any female icons?

Any Woman who has to make her way in a hostile environment, because of her gender and/or skin colour, is an icon in my eyes.

What themes do you address through your artworks?

I tackle a variety of subjects that are close to my heart; Women, but also African spirituality and the human impact on the planet. I’m deeply troubled by the current migration crisis, deaths in the Mediterranean, the Covid 19 epidemic, the death of Georges Floyd, etc. The organic side is a reminder of the ground from which everything that is alive comes. This technique was inspired by the painters of the vohou vohou movement born at the School of Fine Arts in Abidjan in the 70s. I developed the Mixed Art Relief concept around the idea of creating a work of art from its environment and with reference to its origins in dialogue with others.

How has Covid-19 impacted you?

The first confinement was the most difficult to live with because it was the most violent: violent by its sudden and brutal arrival, by its unprecedented global scope, by the deaths of loved ones, by the unknown, and the uncertainty of the next day. I produced the Drunkenness series during the first lockdown. Inspired by Baudelaire’s poem “Get Drunk” sent to me by a friend, this series deals with the management of present time in this climate of violence through exaltation and subjugation. During lockdown, the need for freedom pushed me to experiment: paint with gravity by projecting paint 15 meters high. From this experience, surprised by the arrival of the rain, and a few days later by the second lockdown, the Gravity series emerged.

The murders of Breonna Taylor, Ahmaud Arbery and George Floyd resulted in a series of worldwide protests. Was art therapy for you last summer?

The death of Georges Floyd was the straw that broke the camel’s back, it is the name of these two paintings: La Goutte. It had the effect of raising awareness within the community and initiating a deep reflection on systemic and institutional racism through social, economic, professional, cultural and political exclusion. Nobody today can honestly ignore it and there are some initiatives for more inclusion of Black people in all fields. The question is how this is going to translate into practice in the long run to create a space where we can overcome white privilege and empower the Black community to build a society of harmony and justice.

What kind of subjects are you currently, examining?

Today, a year later, despite another 4-week lockdown which begins here in France, I am more serene and I return to one of my favorite themes: African spirituality.

Do check out Dimbeng’s current works and past collections here

Demif Gallery is an online art gallery, built with passion, dedicated to art lovers and collectors, founded by Didier Demif, a trained artist, writer and communications specialist. The founder’s mission is to promote cultural diversity and young minority ethnic artists, with a particular focus on Contemporary African art. Located in England, they sell artwork from an exquisite pool of emerging young artists from the UK and around the world. As well as being an online gallery, Demif Gallery also commissions art, organises and runs pop up art exhibitions and takes part in national and international art fairs.

Become a member and receive full access to Real Reads, Africa in Focus and Grad Zine. Apply the discount code UNLIMITED25 and enjoy 25% off until the 23rd of April 2021.