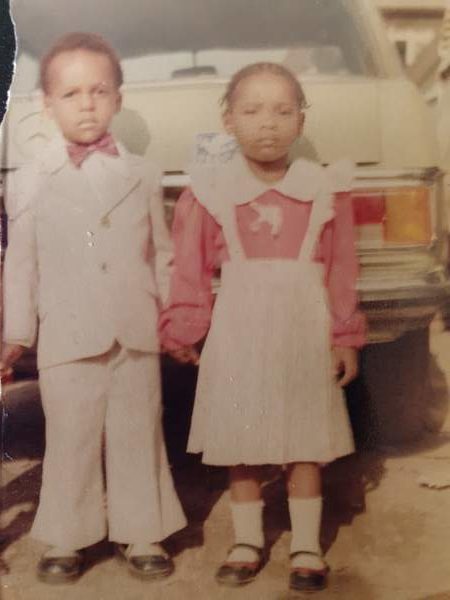 I’m the oldest of my parents five children and I have a twin brother (he arrived 20 minutes before me so, so he would argue that he’s the eldest).  I was born in Lagos Nigeria and came to the UK aged three and a half.  I lived in London all of my life, but left in 2013. I now reside in Essex with my husband and two small children.  I’m Vegan now, and I was a Pescatarian for over 20 years. I’m really into fitness and have worn my hair in its natural state for over 13 years. I am passionate about the social, cultural, political and economic advancement of African women.

Here are some snippets of a recent interview…

Q: What’s your heritage and what do you identify as?

A: Although I have dual nationality, I identify as an African woman.  If I’m honest with you, it slightly perturbs me that there are so many terms available, that describe who “we” are. When I say “we”, I am talking about the Black community. Even the term ‘Black’ is something I wrestle with. Black is the term classified by our oppressors. It’s a falsehood. We know ‘race’ is a social construct, but no other race identifies as a colour, Asians don’t say they are ‘yellow’, Indigenous Americans don’t call themselves ‘red’. Why have we adopted this term? We are Africans. Moreover, I think it’s hard for people to boldly state that they are African.  The list is quite exhaustive, we’d rather be known as Black British or Afro-Caribbean.  People want to call themselves Nubian and Melanated or the political correct term BAME, and of course, let’s not forget ‘People of Colour’ which I find peculiar. I think we need to own, embrace and celebrate our identity as Africans, whether you live on the Continent or are part of the Diaspora. If we don’t unify under one identity, then it gives others the licence to define us.  For me, being African encompasses our struggles, our legacy, our memories, our experiences, our relationships and what we hold as valuable in terms of our culture, which is very rich and steeped in history.

Q: Who Influenced you as a child?  I feel like you’ve got a really strong voice, where did you get that from?

A: That’s a great question. My parents came to England in the late 70’s . Like most of their generation, they settled and seemed to find a community amongst their own.  So, in the 70’s and 80’s, you observed an influx of Africans and Caribbeans populating certain areas of the UK.  For example, over time, Peckham in South London became affectionately known as ‘Little Lagos’, and you have thriving Black communities in Brixton and Tottenham.  So, on arrival, you instantly formed connections and networks in those areas.  Our first property was in Hackney, then we moved to Tottenham, then eventually planted roots in Enfield (better schools!).  As a family we were quite insular. I went to a Catholic secondary school, a convent actually, taught by nuns! (that’s a conversation for another time).

My main sphere of influence was the church and my immediate family. Education played a central role in my formative years. I guess I was heavily influenced by my mother. If there is one thing she taught me, it was to speak up.

Q: Tell me more about your mum?

A: My mum had a clear vision for her life, very astute and a real go-getter.  She knew what she wanted to do with her life and she knew what type of children she wanted to raise. I was influenced by both parents. I wanted to please them and succeed academically. My mum provided the blueprint for my life especially in terms of my character.  She was and still is deeply spiritual, very industrious and very resilient.  She’s unwavering and generous. These are traits I see in myself.  She is somebody that I model myself after, and if I can replicate what she has achieved, I would be really content.

Q. You seem to be quite successful in everything you have achieved so far.  Have all of your brothers and sisters done as well as you?

A: Success is relative and subjective.  I don’t think I’m successful.  I just consider myself to be hardworking.  I’m very convicted and that’s what drives me.  The question might be ‘what does success look like’?  I have so much that I want to achieve, that I feel like I’m still at the genesis of my story… there is so much more to achieve, and that’s not to deny or belittle my progress, it’s just now with the type of work I’m doing, I feel a greater sense of purpose.  I think for a long time I was treading water, comfortable, coasting and complacent – and I believed I was successful. But my success was only benefiting my immediate family.  Now, success is not necessarily what you have in your hand, it’s what you give away, the impact on my wider community.  When I can be an agent for change, when I can be considered a trailblazer.  When I can amplify the voices of those who have been silenced, or lift-up the down-trodden, or leave a legacy, or turn Meeting of Minds into a heritage brand – that for me is the definition of success.