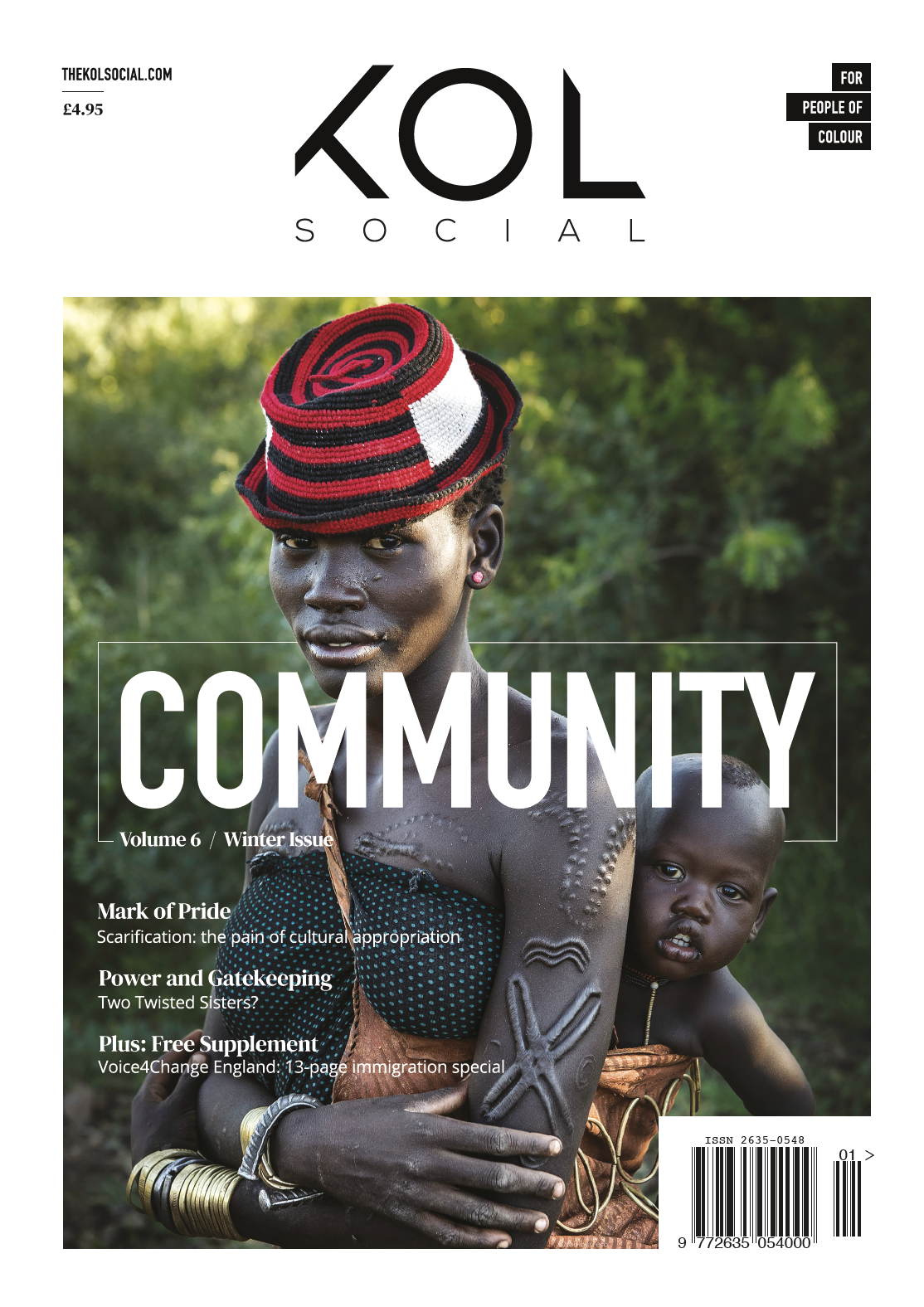 The 13-page publication will feature as a supplement within the Winter Issue 2020 of The KOL Social, a modern lifestyle magazine for people of colour that shares similar themes that V4CE are engaged with. The print magazine is published quarterly and is available in selected independent stores across London, UK.

The COVID-19 pandemic has brought financial strains and challenges to many individuals and organisations, including lack of funding for charities. With this in mind coupled with the year’s increased focus on wider social issues, particularly around race and equality, V4CE believes it is the perfect time for the charity to take a motivated step in a new direction.

Director Kunle Olulode is confident that the creation of this pioneering magazine will be a pivotal vehicle in making the relationships between the charitable sector, enterprise space and the private sector more understandable. Two areas of concern that V4CE have recently focused on have been improving the Windrush Compensation Scheme and addressing the immigration status of affected British citizens.

The first magazine issue is themed around immigration. It includes harrowing interviews with two victims of the Windrush Scandal and also examines how previously classified UK government documents exposed Britain’s immigration policies that explicitly tried to prevent the entry of ethnic minorities.

The KOL Social magazine will continue to present an alternative, photographic view of the world and include features on scarifications and the pain of cultural appropriation; challenges on notions of identity; actress Nina Toussaint-White on how BLM has sparked tough conversations; an interview with Brixton’s award-winning writer, Alex Wheatle MBE; a report on the plight of asylum seekers in Calais and details of how authoritarian regimes across Asia are being confronted by restive populations.

The theme for this issue of the magazine is ‘Community’, a pertinent theme to marry with the V4CE supplement’s theme of ‘Immigration’.

“Charities have to constantly rethink how they approach their aims and objectives. We believe that it is crucial that our sector evaluates how it represents issues relating to minority communities and is engaged with where their specific audiences are. We recognised that there was an urgent need to tap into the relevant voluntary sector that exists beyond the congested world of social media. Repeated feedback suggests that charities are too often not in keeping with the 21st century and where  young volunteering and voluntary organisations views and ideas are at.”– Kunle Olulode MBE, Director at V4CE.

“It is important for KOL Social to serve our communities in the best way we know how. Our mission has always been to reach difficult to reach audiences and those that feel underrepresented in the mainstream media. I am so proud and excited for Voice4Change England to launch within KOL Social magazine as the country’s first charity magazine for people of colour, working to help give a voice to overlooked groups and social issues, and ultimately driving real, actionable change.” Marcia Degia, Founder & Publishing Editor of KOL Social.

Voice4Change England is a national advocate for the Black, Asian and Minority Ethnic voluntary and community sector (BME VCS). As the only national membership organisation dedicated to the BME VCS, the charity and infrastructure support body speaks up to policymakers on the issues that matter to the sector, brings the sector together to share good practice and develops the sector to better meet the needs of disadvantaged communities. Its members are from the BAME community organisations and charities, with interests ranging from criminal justice to migrant rights. For more information, go to: voice4change-england.com.

Kunle Olulode MBE is the director at Voice4Change England. He is a co-opted member of the Commission on Race and Ethnic Disparities, attending meetings relevant to his work on the Windrush Working Group, and was recently instrumental in the publication of the report ‘Home Truths: Undoing racism and delivering real diversity’, highlighting the experiences of BAME people working in the charity sector. As a trade union activist at Camden Council, from 2002 – 2011, he led the Camden Black Workers staff group; he represented over 500 Black and Asian staff members and founded its award-winning Camden Black History Forum. Kunle is a trustee of the English Heritage Trust and, in 2017, became one of its first Black board members. In October 2020 he was awarded an MBE in the Queen’s Birthday Honours List for his services to the BAME sector. He is also a regular on television and radio including Radio London, Al Jazeera, Sky TV, RT on debates relating to politics, the arts, diversity and race.

The KOL Social is a print magazine for people of colour – the often underrepresented in fashion, beauty, culture and lifestyle. Launched in October 2019, the print publication is distributed across London and is available to order online and by mail subscription. The KOL Social is made up of a collection of entrepreneurs and professionals, ‘Key Opinion Leaders (K.O.L.s)‘ working in the relevant industries.

Marcia Degia is the founder and publishing editor of The KOL Social as well as the Marketing and Communications Strategist at V4CE. She has a robust experience in print and online journalism having worked for over 20 years with some of the leading magazine publishing companies in England. Former positions held include Acting Managing Editor of Homes & Gardens, Editor of Pride Magazine (for women of colour), Editor of Your Home and Publisher at Macmillan Publishers.

See below for a directory of selected newsagents and book stores in London where you can pick up a print copy of the magazine for £4.95. Alternatively, to order your own copy of KOL Social Volume 6, go here.