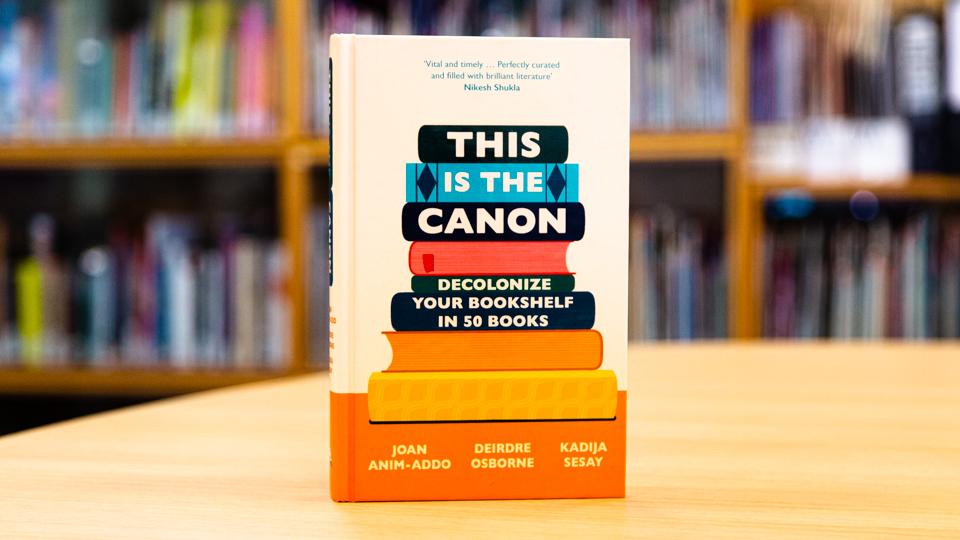 This is the Canon: Decolonize Your Bookshelves in 50 Books

This is the Canon: Decolonize Your Bookshelves in 50 Books

“The ultimate introduction to post-colonial literature for those who want to understand the classics and the pioneers in this exciting area of books” – Symeon Brown
Written by Emerita Professor Joan Anim-Addo, Dr Deirdre Osborne and Kadija Sesay, This is the Canon is described as “a vital and timely introduction to some of the best books I’ve ever read” by author and screenwriter Nikesh Shukla.
Published by Greenfinch, a non-fiction Quercus imprint today, This is the Canon has been designed for bibliophiles seeking a comprehensive must-read literature list – whether they are book club members or solitary readers, self-educators, students or teachers.It taps into the ongoing discussions of race, identity, and decolonisation taking place in Britain and around the world, presenting a guide to books that can educate and open up a broad range of perspectives, as well as novels from marginalised voices.

The book celebrates the wide and diverse experiences of writers and their creations across the globe, seeking to disrupt white-dominated ‘required reading’ collections that have become the accepted norm. It encourages book buyers and borrowers from young teenage readers upwards to seek out literature beyond the ‘traditional’ canon’s borders.From literary giants such as Toni Morrison and Chinua Achebe to equally vital writers such as Caribbean novelist Earl Lovelace or Indigenous Australian writer Alexis Wright, the novels selected and discussed within This is the Canon offer a multifaceted perspective on the past, present and future.

The power of great fiction, the authors of This is the Canon explain, is that readers have opportunities to explore new worlds and encounter a breadth of beliefs and opinions.

In the book’s introduction, they describe their selection of 50 novels as “unquestioningly transnational in its outlook” and “responsive to the multiple heritages that any one of the 50 writers might embrace”.

Professor Joan Anim-Addo was appointed Director of the Centre for Caribbean and Diaspora Studies at Goldsmiths, University of London in 1994 and is now Professor Emerita of Caribbean Literature and Culture. Her body of work ranges from histories of black Lewisham and Greenwich to poetry collections, literary histories of African-Caribbean women’s writing and a libretto, Imoinda.

Dr Deirdre Osborne is Reader in English Literature and Drama at Goldsmiths, and is Programme Convenor of the MA Black British Literature. She is Associate Editor of the scholarly journal Women’s Writing and edited The Cambridge Companion to British Black and Asian Literature (1945-2010) among other works.

Kadija Sesay Hon FRSL is a writer and editor of several anthologies, founder of SABLE LitMag and AfritPoetree SIV and co-founder of The Mboka Festivall in the Gambia. She was awarded the MBE for services to literature.

In 2015 Professor Anim-Addo and Dr Osborne introduced the world’s first MA in Black British Literature at Goldsmiths, a course described by journalists and authors as a “landmark for black culture” which “added to the fabric of British literature”.

The EdExcel guide, written by Dr Osborne, presents a dozen Black British texts for students to choose from for their free options as part of their course. As Dr Osborne wrote at the time, encouraging young readers to explore a “wide and diverse range of literary voices dissolves the notion that there is a unique, singular experience of literary Britishness”.

Earlier that year, The Royal Society of Literature had asked 2000 people to name ‘writers of literature’ and just 7% of the 400 writers named were from Black, or Asian backgrounds.

Speaking to iNews during Black History Month and ahead of the launch of This is the Canon, its writers explained the intention of the book: their selection of 50 authors are not ‘replacing’ Shakespeare, Golding or Blake, but by presenting an ‘alternative canon’ they are seeking to encourage readers of all ages to discover, read and support a more diverse range of brilliant creative work.

Professor Joan Anim-Addo said: “The canon, as most people understand it, is never going to be abandoned. This is a call-out to people to read more widely… which will generate its own kind of enthusiasm for experimenting with reading so that one really begins to appreciate there is a richness out there we aren’t aware of.”