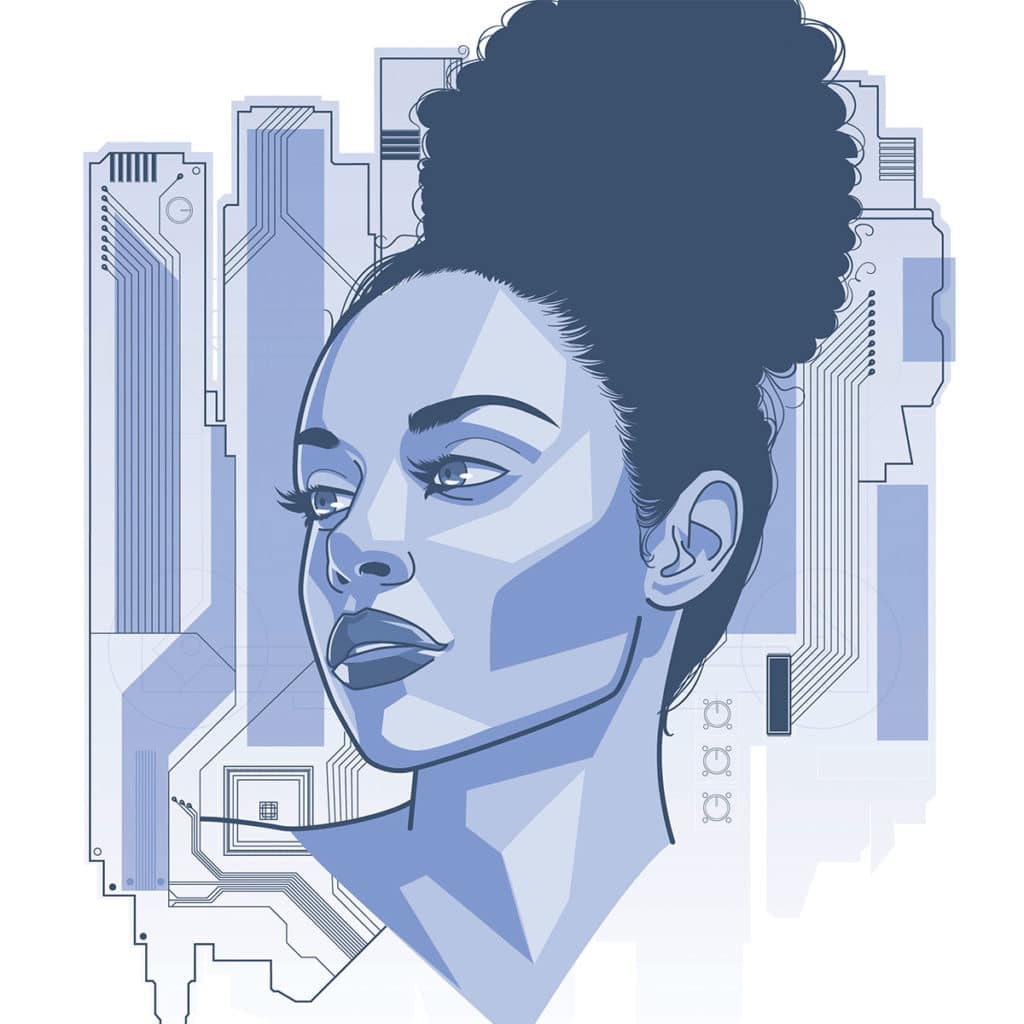 While the economy is in a free downfall, adequately captured and aided by the persistent dive of the national currency, one sector that is on an upward trend in Nigeria is the tech industry. With the highest number of start-ups in Africa, each choosing a specific niche ranging from payment processing, healthcare, energy, logistics and subscription-based food delivery, there is an abundance of technology innovation going on in Nigeria.

However, the presence of Women on each rung of this ladder, from software engineers, product designers to founders is at an abysmal level. The meagre number of female top managers further exemplifies the male dominance of the Nigerian tech sector. In sub-Saharan Africa, the overall female labour force participation rate is at 61%, yet Women constitute just about 30% of professionals in the continent’s tech industry. This, unfortunately, is not limited to Nigeria alone. The gender imbalance issue is global, but the problem is particularly pronounced in Africa. Over the past decade, only 10% of start-ups in West Africa that had raised $1 million had at least one female co-founder.

Several factors have been said to be contributory to this reality. From the poor enrolment of female children in school to the dissuasion from Science, Tech, Engineering and Mathematics (STEM) programmes of those already in school, which has heightened over the past years with the increasing insecurity levels in Nigeria and the global pandemic. However, in recent years, there has been an increase in the number of communities less bothered about the reasons for this bias but rather in closing these gaps. From initiatives that amplify Women in African tech, such as Tech Women Lagos, to those organising training sessions for Women to get into their preferred roles such as FemCode Africa – a tech education company which has trained over 1000+ African Women and secured jobs for more than 80% of their trainees across multiple countries over the past two years, and those providing a community for tech enthusiasts and subsequently training them just like SheCodeAfrica over the past five years, and even across the continent with GirlCodeAfrica leading the charge from Ghana. These Women are doing the work.

However, much more than opening pathways for Women to excel in tech roles, these organisations are helping provide safer working environments and reduced avenues for sexual harassment in this male-dominated field. News broke out earlier last week of a married man who was harassing and preying on Women in Nigeria under the guise of providing them with tech training and resources. There is a need for Women-focused, Women-led initiatives in getting access and ensuring inclusivity; this is one of the pain points these communities serve to assuage.

SheCodeAfrica (SCA) was established in 2016 by Ada Nduka Oyom who was a microbiology graduate at that time. It started as an initiative to spotlight upcoming Women in tech but rapidly evolved into a community because more Women wanted to connect and network with the Women they were spotlighting. Soon enough, there was a need for resources for these Women to excel in tech and that eventually became the 2-arm of SCA: The Community and Non-profit organisation.

In the five years since its establishment, the work SheCodeAfrica does has now extended beyond the shores of Nigeria. In discussion with Ada Nduka Oyom, the Founder of SheCodeAfrica, who is also an Ecosystem Community Manager at Google, she says SCA currently has about 30 local chapters in cities and campuses across five African countries including Nigeria, Ghana, Kenya, Rwanda and Cameroon. They have also been able to train over 2000 Women and have over 7000 community members.

Building a sustainable community over the years demands intensive and consistent efforts, and Ada relates that most of this comes from volunteers. Talking about the operating model at SCA, Ada says, “People see the impact we’re able to constantly create within the industry, so it’s a bit easy for experts in the industry to be convinced in volunteering their time with us as mentors. Additionally, some of our programmes allows us to compensate these mentors thanks to sponsors. We also run most of our programmes virtually and this helps us save a lot of costs. Sometimes, the girls participating can’t afford constant internet access, so we try to provide them with monthly data stipends throughout the programme.”

The training programmes at SCA focus a lot on getting the girls to scale up their technical and soft skills, such that it’s easier for them to get employed right after. Expanding on this, Ada says, “Many of our programme graduates get their first job opportunity right after wrapping up their cohort. Also, because of our impact and credibility, we get a lot of job openings and requests for talent from our community, so sometimes there’s already a pipeline to plug many of these girls into right after.”

However, this gender disparity problem does not stop at the tech hiring roles. It is also up the ladder, especially when it comes to funding. In fact, organisations like SCA often depend on donations from individuals. In Ada’s words, “We only started raising funds from 2020 and because our work rate is impressive, we’ve been able to raise funding via donations from individuals and programme sponsorships from top organisations. Next year we plan to double up on that”.

It is understood that funding is one of the hardest stages of a start-up’s evolution, and success at this stage is a key component to a start-up’s survival. However, it is particularly harder for Women-led start-ups. Studies have shown that the venture fundraising procedures favour male founders early on, especially at the pitch stage, even though Women are starting more companies than men. In 2019, only about 2.8% of global venture capital went to female-led companies – a record high – and the trend continues to be negative due to the global pandemic. The venture capital funding in Africa has risen over 5x in the last six years, yet only about 15% of the funded start-ups had Women as founders, co-founders or C-level executives.

This is a problem FirstCheck Africa is trying to solve for African female founders. Odunayo Eweniyi, (Co-founder and COO, PiggyVest), believes that Women in African tech are over-mentored and under-funded. In her words, “So many well-meaning programmes offer female entrepreneurs’ mentorship, training and incubation. But this disproportionate focus on Women’s capacity over our access to capital and networks ignores the consistent evidence that Women-led start-ups tend to perform better and shifts the burden of fixing the problem to female founders”. This is one of the reasons why she founded FirstCheck Africa – together with Eloho Omame (Managing Director, Endeavor Nigeria).

FirstCheck Africa is a female-led angel fund that invests “ridiculously early” in Women in African tech.  A Women-focused investor community that invests up to $25,000 in each start-up in exchange for equity, whilst providing access to high-value networks and also helping start-ups raise a significant pre-seed round within 12 months. It was established earlier this year, and they plan on investing in up to six Women-led start-ups this year. The founders reiterate that, “We’ll act as active connectors and collaborators, using our networks and resources to accelerate their efforts. We’ll spend our time, financial and social capital helping them validate their ideas, gain all-important early traction and raise the next stage of capital.”

However, FirstCheck Africa does more than help female start-ups. They are also building a Women-only investor community where millennials and mid-career Women who cannot afford to commit typical venture capital funds in one go. By doing this, they are creating opportunities for Women to invest at more comfortable levels, enabling them to secure their bags despite the exclusive male-dominated investor communities out there, thereby advancing equity, capital and leadership for a generation of Women in Africa.

Last month, news circulated that Oja, a London-based start-up, bagged a $3.4 million pre-seed round to build the first online supermarket targeting the country’s growing cultural communities. While this is a win for the Black community – especially as Mariam Jimoh, the founder is a British-born Nigerian – this does not translate to the reality in Africa – or even Nigeria.

Entrepreneurship and technology are massive high-leverage opportunities for African Women to build wealth and influence, and these female-focused initiatives are slowly helping level the playing ground. While the progress might be slow, as Adaora Nwodo – a software engineer at Microsoft said, “If you are a Woman looking to get into tech at this point in Nigeria, there’s support for you”. This statement is increasingly true, at every stage of a Nigerian Woman’s tech journey.