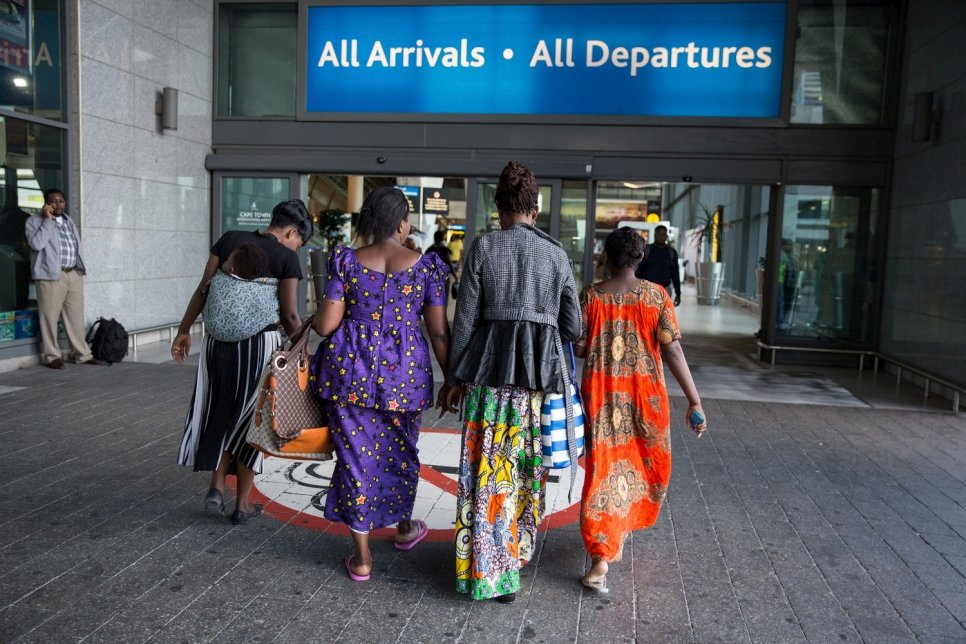 Living in Limbo, an Asylum Seeker’s Journey in SA

Living in Limbo, an Asylum Seeker’s Journey in SA

On the 8th of March 2021, the South African Government and the UN High Commissioner for Refugees launched a (US) $9.6 million project to clear the backlog of hundreds of thousands of asylum seeker applications.

The project will prioritise over 150,000 Asylum seeker applications for Refugee status that have been backlogged for years. Lawyers and other officials will be hired, and the Minister of Home Affairs, Aaron Motsoaledi, estimates this 68-year backlog will be cleared in four years.

Coco Ngandu represents just one of the hundreds of thousands of people whose fate lies at the mercy of the Department of Home Affairs.

She’s been waiting for over a decade.

“Every six months, I travel to Durban from Pietermaritzburg [an hour away] with my children to renew my papers. I have to get there on the date that is set, and it’s usually very full, so I wake up at three to prepare myself and the kids to be there as early as possible. Before, it used to be every three months. It is tiring, thirteen years of this and the children’s schooling gets disturbed, but it’s something we must do until we get better papers”, said Ngandu.

She says after her dad got shot and lost a leg in a political stand-off in the Democratic Republic of Congo (DRC), life became unbearable as she watched her hero lose all that he once had and become dependent on community help to survive financially. Ngandu moved to South Africa, hoping to access a better life. She found herself stuck in the asylum seeker system for thirteen years, unable to access the full rights of being a refugee in SA.

Gabriel Hussein is another asylee stuck in the same process. He arrived from the DRC sixteen years ago and still awaits that elusive refugee status. His experience with the application process gives an insight into the kind of delays claimants may face, “When you read the Home Affairs website, it will tell you that it is meant to take six months to know if your application is approved or not, but it takes more than ten years. You can’t even ask questions when you get there; you are part of a long queue, and officials have no time for explaining. Furthermore, it is expensive to renew your papers every few months. I arrived in Johannesburg and moved to Durban, and I have to travel to Johannesburg offices to renew. I can’t do it in Durban”.

In 1998, the Department of Home Affairs received 11,135 applications, rising to 53,361 in 2006. Within a two-year span, numbers dramatically quadrupled to 207,206 in 2008 – a far cry from the slow and steady incline seen in previous years. Motsoaledi suggests this as the reason for the current backlog, “Things changed for the worst in 2008 when the number of applications shot up nearly fourfold to 207,206 […] These numbers overwhelmed the system, which was functional in dealing with 53,000 applications a year”.

These findings pose a new question: why have the figures increased so dramatically?

Looking at the largest migrant communities in South Africa currently, we see an overabundance of nationalities from now war-torn and politically volatile countries: Somalia, Democratic Republic of Congo, Congo Brazzaville, Ethiopia, Burundi and Zimbabwe. While many of these conflicts have been ongoing for decades, incidents such as the 2006 – 2009 Somalia War and hyperinflation in Zimbabwe dominated the economic and political landscape. Such explains the sudden rise in migration to South Africa, which offers a much more stable economy and government.

Sadly, these spikes don’t seem to be a trend ending any time soon. In fact, the United Nations High Commissioner for Refugees (UNHCR) reports that the number of global refugees has, for the first time since World War Two, exceeded 50 million (in 2014).

Returning to South Africa more closely, Amnesty International discovered that asylum seekers face a 96% rejection rate. According to the report, this results from poor decision-making, a lack of care while making decisions, and not going through each and every case as a unique circumstance. Instead, rejection notices are copied and pasted. According to Amnesty International, the carelessness can be spotted in rejection letters not even correlating with the details of the asylum seekers application, sometimes even having a completely different country or nature of persecution.

Accordingly, corruption is another significant factor for the nation’s inefficient asylum seeker system. The Department estimated 85% of its employees to be involved in illicit practices, such as bribery in exchange for legal papers and purposely postponing applications for those who don’t pay. In 2016-17, there were 1,232 litigation cases brought up against the Department on immigration and 1,900 cases involving asylum.

Structural misconduct is something people like Gabriel Hussein fear concerning their own cases, “Life doesn’t stop while you are waiting for an answer, I am tired emotionally, too many lies and delays from this government, I can’t work anywhere, my children have problems getting an education, there are too many problems”.

While South Africa bears a reputation for having some of the most progressive laws in its constitution when it comes to the treatment of refugees, life remains challenging for the many hundreds of thousands who don’t (or can’t afford to) make the cut.

Coco Ngandu giving a speech at an event her day care centre had in KwaZulu-Natal capital city of Pietermaritzburg, 2017

As an asylum seeker in South Africa, you cannot work in the formal labour market, meaning that any qualifications gained before entry are effectively worthless. When applying for a physiotherapist position at the Department of Health, Ngandu was told her qualifications were excellent (she obtained a degree in physiotherapy while in the DRC), but she could not be hired as an asylum seeker. They could only consider her if she had refugee or permanent resident papers. Furthermore, other employers are discouraged from hiring asylum seekers because of the temporary nature of their papers; they cannot open a bank account for the same reasons.

Asylum seekers are also denied access to funds or assistance from the government. Accordingly, the landscape created by COVID-19 has exacerbated the situation even more. In order to support herself and survive during her thirteen-year-long wait for acceptance, Ngandu ran a childcare centre that was forced to close for six months last year. Many others look to street markets and stalls to make ends meet. But with streets deserted and facilities forced to shut down, this diverse community has been struggling to stay afloat.

The backlog project aims to help restore justice to the migration process for these most vulnerable of groups, only time will tell if this is achieved.

Written By: Naledi Sikhakhane – a South African freelance journalist and social media manager. She is passionate about bringing forth female narratives and giving a platform to the disadvantaged. Follow her on Twitter Instagram and learn more about her work here