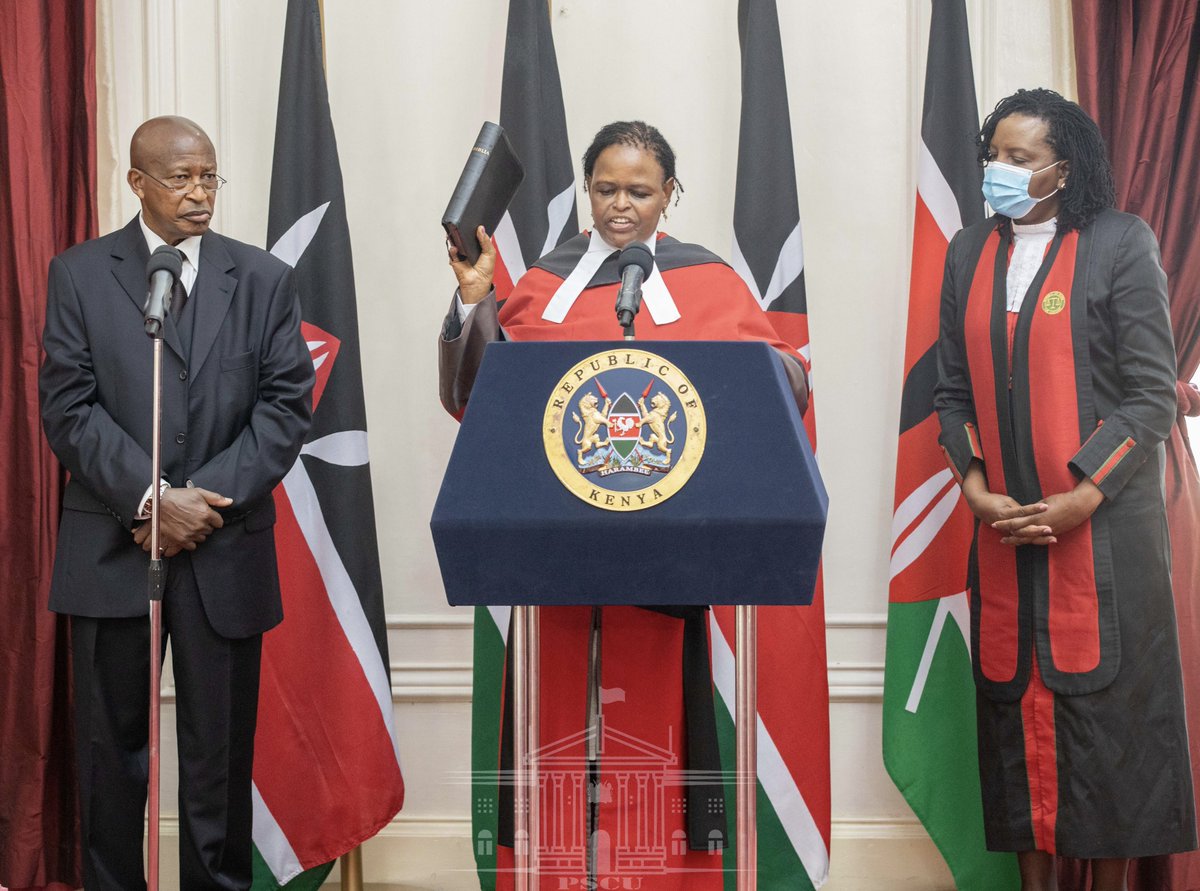 “Women entering male-dominated professions should not succumb to the pressure to adopt what are perceived to be ‘male norms’. This is because leadership and professional ability is gender neutral”, Kenya’s Chief Justice said in an exclusive interview with Africa in Focus.

From the Eleventh to the First

Martha Koome was sworn in as Kenya’s 15th Chief Justice and President of the Supreme Court on 21st May 2021. But growing up as one of 18 children in the rural Kithiu Village in Meru, Eastern Kenya, she never imagined she’d be the country’s first Woman to head a branch of government.

“My parents were peasant farmers. We were 18 children from two mothers; my father was a polygamist. My mother played a pivotal role in my upbringing. Understandably, she was the first wife, and my father devoted his time and little resources to my stepmother and her children. From this disadvantaged position as the 11th-born child, struggling in every aspect to survive and go to school, it didn’t cross my mind that I would be the first female Chief Justice of Kenya.”

After graduating from the University of Nairobi in 1986 with a bachelor’s degree in law, she proceeded to the Kenya School of Law and attained a postgraduate diploma in 1987. Koome was admitted to the Bar as an advocate the same year.

She tells us, “When I joined the legal profession in the 1980s, the upper echelons of the Judiciary were occupied exclusively by male judges. While I knew this state of affairs would change with time, it was difficult to tell that changes in the gender composition of the Judiciary would take place within my lifetime.”

Before the bench, there were Political Detainees, Women and Children

Koome became known during the autocratic regime of Kenya’s late president, Daniel arap Moi, when she defended those charged with politically instigated offences. She also represented women, subsequently leading civil rights organisations to secure women’s participation in the constitutional review. Often, her colleagues would not want to represent female clients, so she took on their cases. She came to see how difficult it was to get justice for women in the courts regarding property rights and inheritance. Soon after, she co-founded and became the chairperson of the Federation of Women Lawyers (FIDA), that advocated for the rights of women and children.

“The historical context at the time I joined the legal profession also speaks to why ascending to the Office of the Chief Justice may not have been on my mind. I was largely preoccupied with advocacy for protecting the rights of the vulnerable members of society, especially women and children. In addition, Kenya was an authoritarian nation, and those of us in the human rights movement were consumed with fighting for constitutional reforms that would enable the country to transition into a democratic and human rights-respecting state. Thus, serving on the bench was not within my plans.

“After serving as a representative of the civil society in a government-appointed Multi-Sectoral Justice Sector Legal Reforms Committee from the year 2000 and subsequently as a Judge of the High Court from 2003, the thought of leading the institution of the Judiciary as Chief Justice crossed my mind. It was in these two positions that I got to interact closely with the justice system and saw the systemic impediments to the quest for [the] efficient administration of justice. This ignited my dream of heading the judiciary and tackling these problems.”

Martha Koome (center) alongside her friends and FIDA lawyer counterparts

In 2012, Justice Koome was made a judge of the Court of Appeal. In 2019, she supported a ruling giving members of the LGBT community the right to associate. Koome argued that no person should be told whom to love, regardless of their sexual orientation. “Detesting gays and lesbians is outright discrimination. This group does not threaten the institution of marriage. It is an institution that one enters out of choice. This is stereotyping people and expecting that the same size fits all”, she ruled.

Justice Koome has long been passionate about the rights of Women and other disenfranchised groups. During her interview for the Chief Justice position, she affirmed that she subscribes to feminist legal theories which state that the current law corresponds with structures of patriarchal oppression. Koome said, “I subscribe to that 100 per cent. The patriarchy dominates the legal structure because our society is patriarchal. Laws are made in parliament and the dominant majority in parliament is male, so it’s informed by their background and socialisation.”

Seven days later, the soft-spoken 61-year-old Koome would be appointed to the highest judicial office.

On the historic appointment, Justice Koome said, “The institution has radically transformed from the state of affairs in the 1980s when there was hardly a single female judge within the Judiciary, to an institution that is now the pacesetter for other government institutions in terms of gender equality

“I should point out that apart from the office of the Chief Justice, women also occupy the two other senior most offices in the Kenyan Judiciary. The Deputy Chief Justice and the Chief Registrar of the Judiciary are women. Another noteworthy feat is that the Judiciary has achieved gender parity in all its employee segments and put in place a very progressive Gender Mainstreaming Policy.”

No Magic Wand at the Top Seat

Justice Koome continued, detailing the leadership challenges she’s encountered: “I would say that the most difficult part of being a leader is having the dream, but not having the magic wand to realise it immediately. To have a transformational impact on an institution takes time, and this calls for patience before the vision can come to fruition. This is even more frustrating in public service, given that society tends to demand for immediate results.

“To illustrate, we have the vision to transform the Kenyan Judiciary to an institution that is efficient in the delivery of justice. However, realising this dream will take time given the need for investment in adequate human and capital resources to implement the vision. “

A Word for the Women

As a final take, the Chief Justice shared a word of advice and encouragement for all women, saying, “Women leaders or women entering male-dominated professions should be confident in their abilities. They should not succumb to the pressure to adopt what are perceived to be ‘male norms’. Leadership and professional ability is gender neutral, hence one should have confidence that they are suitable for the position at hand so long as they’ve the relevant training and vision to deliver on their mandate.

“In my experience, one is bound to meet some obstacles along the way in one’s leadership and professional journey. Rather than being discouraged when we encounter these, we should see these problems as challenges that can be overcome with creativity, tenacity, and determination.”

Justice Koome’s appointment marks a moment in history for women’s emancipation on the Continent. But we need more than just moments to make sustainable progress – we need women like her to be part of Africa’s everyday reality.