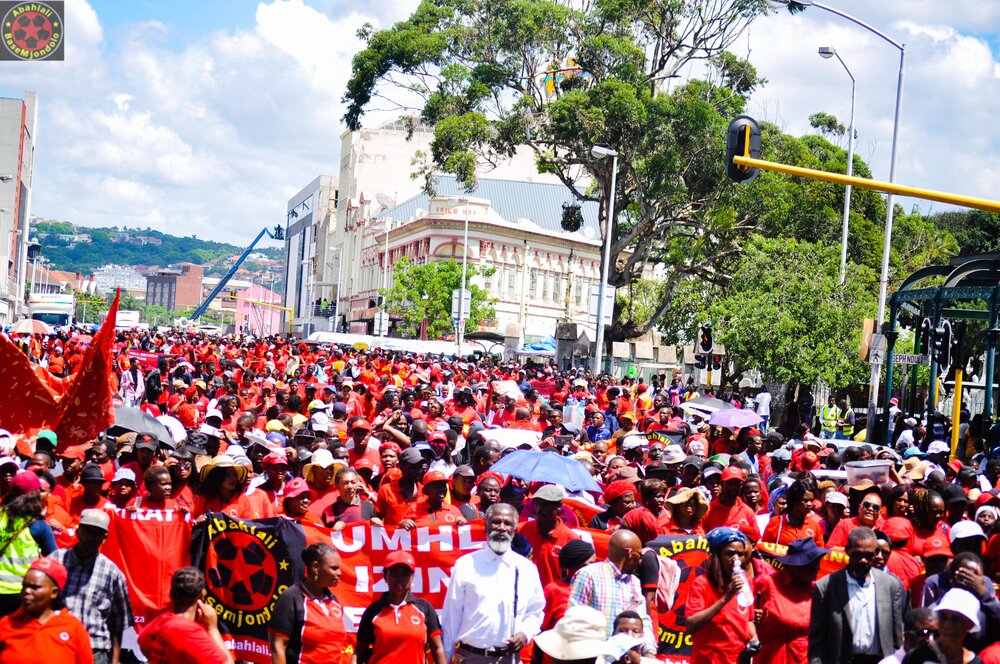 Poverty, xenophobia and lack of access to housing and land all seem to converge at one boiling point in South African communities. In February 2021, I attended a migration reporting workshop organised by Internews, Save The Children and the Democracy Development Program in Durban, South Africa. During a field trip, I was introduced to Abahlali Basemjondolo, an organisation fighting for housing rights by trying to build a just and equal society based on respect and dignity for all humankind. This is how I met Nomusa Sizani, Secretary-General of Abahlali Basemjondolo.

Abahlali Basemjondolo is a shack dwellers’ movement that campaigns for public housing. It was formed in 2005 after a series of housing protests, to give a platform to Abahlali Basemjondolo, which translates to ‘the people of the shacks’ in English. Since its inception, the movement has expanded to the cities of Pietermeritzburg and Cape Town, adopting an anti-capitalist, anti-xenophobic and feminist agenda. I, along with other workshop participants, travelled from northern Durban to one of their branches in Khenana, Durban.

When we arrived at Khenana, we found a class taking place. Songs of jubilation came from a wooden pallet building, which was branded with the words ‘Steve Biko LIVES!’ in white near one of the windows. Everyone was decked out in Abahlali Basemjondolo colours, red and black. We were welcomed with praise songs. S’bu Zikode, one of the founders of the movement, spoke first. The other leaders of Abahlali Basemjondolo spoke after him, one woman was among the speakers. She introduced herself as Nomusa Sizani.

In an impassioned speech, she declared Abahlali Basemjondolo against xenophobia.

“I want to go straight to the vision of Abahlali Basemjondolo. Our vision is to build a just and equal society based on respect and dignity for all humankind, regardless if you are a woman or coming from another country. It doesn’t matter what language you speak or your religion. As Abahlali Basemjondolo, we believe that every person should be treated with respect. We are bringing back ubuntu that was taken from us by our colonisers,” she roared.

Ms Sizani joined Abahlali Basemjondolo in 2017 after they helped her get compensation after the murder of her son during an informal settlement demolition by the Durban Municipality. She says she first went to the Economic Freedom Fighters Party (EFF), the third-largest political party in South Africa, to get legal help, but they did not provide her with any support. Instead, Abahlali Basemjondolo stepped in and helped get her dignity back during the court case that followed, offering legal resources and a comforting community.

From that point onwards, she was determined to give back. On Monday, 1st March, 2021, Ms Sizani accompanied a woman suing her rapist in the Durban courts. She understands all too well what South Africa is like for women. Women’s rights groups in South Africa estimate that a woman is raped every 26 seconds in the country, while the South African Police (SAPS) gauges the rate to be every 36 seconds.

African migrant women, thus, face two types of violence in the country by being a foreigner and a woman. This is evidenced in a survey undertaken by the Centre for the Study of Violence and Reconciliation (CSVR) after the 2008 xenophobic attacks. During the research, entitled The Gendered Nature of Xenophobia in South Africa, the respondents said they had experienced violence and discrimination from both South African men and women. One of the respondents said, “they make you feel like an outsider—why does she have a scarf on? Where does she come from? She must go back to where she comes from. It makes you feel like you are not a human being to hang with them or to greet them or to be surrounded by them.”

Out of all surveyed women, a staggering 71% said they were affected by xenophobic violence in 2008, while a further 68% said they had suffered discrimination after. Clearly, there is an urgent need to protect migrants, which Abahlali Basemjondolo aims to address.

It is strange that more recent figures on gendered xenophobic violence haven’t been released, despite the huge increase in the nation. Naledi Sikhakhane, a Durban based journalist who has written about one attack estimates that there have been seven different coordinated attacks in the past four months in Durban central alone! Perhaps the dearth of contemporary literature regarding this phenomena further speaks to the erasure of groups who face multiple layers of marginalisation from public discussion.

Fortunately, more recent data (2012-2017) on the migrant situation regarding their participation in the economy was released in May 2020, though it remains generalised. According to Statistics South Africa, the migrants form 7% of the total population, including documented and undocumented people. Of this percentage, about 5.3% is of working age, and most employed migrants are in precarious work—or the informal sector (neither taxed nor state-monitored). Abahlali Basemjondolo teaches these facts to its members, including young South African and migrant children in the organisation, who represent the future of inter-ethnic relations in the nation.

They also have schools that accommodate migrant children who are not accepted in South African schools. Ms Sizani said, “We do have children in our communities who are the children of our brothers and sisters from Africa so mostly we help them by providing crèches in our communities. Some of them are not accepted in our schools because they are not from here.” When she was asked what this integration means for the community, she said, “it will help children to grow up knowing that this one is my brother regardless of what language they speak or what their religion is. They will grow up with a mentality that says we are one family.”

Nomusa Sizani described herself as a feminist. She said, “In many organisations and parties, women are just there, like vases. They are not there in decision-making.

But in Abahlali Basemjondolo we are really fighting the patriarchy. We do have women in leadership.

It is with hope that more institutions and sectors of society incorporate women’s voices into driving real social and economic change. Ms Sizani’s work signifies just the stepping stone of a nationwide need to safeguard and enfranchise vulnerable people, and she’s doing a mighty good job so far.

Written By: Fiske Niyirongo – a Zambian writer of both nonfiction and fiction. She is a 2020 PenPen African Writers Resident. Follow her on Instagram

Header Image: courtesy of Africans in the Diaspora