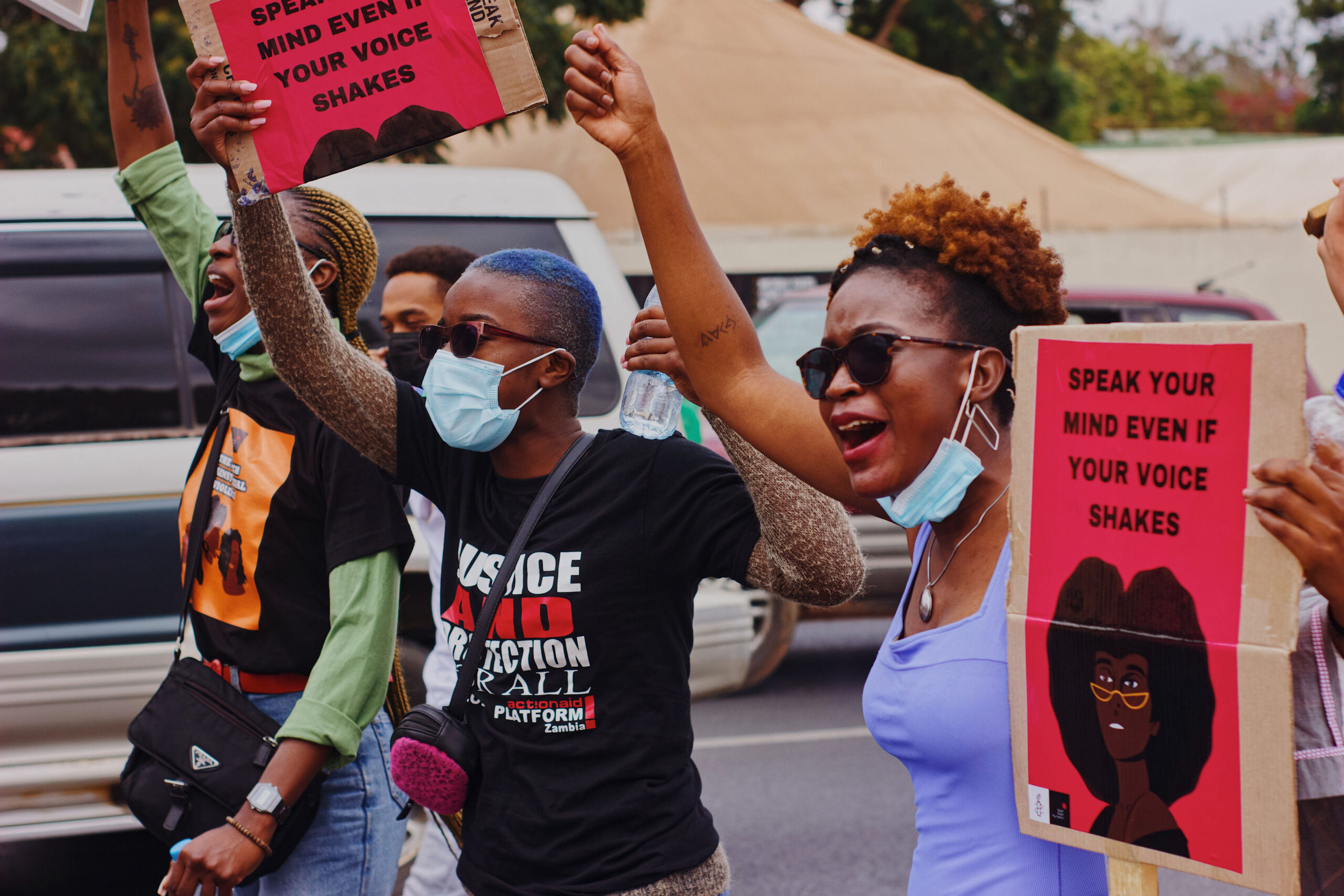 The March to End Sexual Violence in Zambia Continues

The March to End Sexual Violence in Zambia Continues

On 11th September 2021, Sistah Sistah Foundation, a Zambian grassroots organisation that advocates for the rights of Women, girls, and minorities, held its second Women’s March. The March Against Sexual Violence came within a week of a new Zambian government. I attended the March with 100s of other young Women, most of whom were in their early twenties.

According to UN Women, Zambia has one of the highest rates of sexual and gender-based violence in the world, with 43 percent of girls and Women between the ages of 15 and 49 having experienced some form of sexual violence. The sexual violence girls and Women face in this country is deeply rooted within the misogyny and gender inequalities that exist throughout society.

During the March, we got a taste of how people react to Women and girls asking for basic human rights – the right to safety and to exist without harm. A Woman and her female teenage passenger jeered at us, stating that we were embarrassing our mothers and going against our culture. A motorist screamed at us, spouting that our behaviour is what ‘white people do’ and another motorist closed his windows and shook his head at us.

This culture is entrenched throughout Zambia. It affects every part of society, including the institutions that are supposed to uphold the law. About 18,000 sexual violence cases are reported annually in Zambia. Out of this figure, approximately 7 percent of cases make it to court. This figure is shocking for a country that prides itself on being one of the beacons of democracy in Africa. It is also widely believed that many more cases go unreported due to barriers including access to health care and police facilities.

When a Woman or girl reports being raped on social media, the views are not one of outrage, but judgement

UN Women further notes that physical and sexual violence cases are slightly higher for Women with husbands or partners. It quotes from research conducted between 2013 and 2014 by the Zambia Central Statistical Office and the Ministry of Health who estimated that 45.9 percent of Women and girls aged between 15-49 will experience intimate partner violence in their lifetime. This figure mirrors the general statistic of violence against Women.

From this research, it is clear why rape culture is prevalent in Zambia. When a Woman or girl reports being raped on social media, the views are not one of outrage, but judgement. Comments lay blame at the erosion of culture and Women’s clothing choices. It is all too common to read questions such as ‘what was she wearing’, and if she wasn’t dressed ‘indecently’ men would not be tempted to rape her.  People are far too comfortable saying such sexist and violent statements on social media  – with no recourse or reproach, they boldly reveal their real faces and names.

Like many low-income countries around the world, Zambia implemented the one-stop model for gender-based violence cases to address the urgency of rape. The development of one stop centres was a response to several issues identified by survivors and their advocates when seeking services in traditional hospitals, police posts, and legal systems. One-stop centres are open 24-7, staffed by Women trained to deal with sexual violence. Organisations including Sistah Sistah Foundation stress the importance of these centres.

Sistah Sistah Foundation was founded in February 2018 by Mwangala Monde and Ann Kay Holland. The grassroots organisation has advocated for 900 sexual violence cases in their three-year existence. Only two cases have made it to court. This is a scary and alarming fact. I talked to Ms Monde to find out more about their work.

“The March was organised to protest the sexual and gender-based violence that women experienced during the recent election and to bring this crisis to the attention of the new government.”

I asked her what they hoped to see after the protest and she said, “we hope to see the president’s office listening to our demands and taking active steps to affect necessary change. We want to see Zambia being a safe haven for omen, children and minorities.”

Ms Monde also provided more context on the one-stop model in Zambia. “We have 8 one-stop centres throughout Zambia if I’m not mistaken. The staff are trained, and victims are prioritised, but the main challenge is that most people do not know about the existence of the centres. Sometimes receptionists at the hospitals can be rude and unwelcoming to victims trying to locate the one stop centres.”

Following the March, Sistah Sistah Foundation started a petition aimed at getting the attention of the Zambian government. The petition complements efforts made by them and others across the country. In July, we covered the story of The National Action for Quality Education in Zambia -a drive to implement comprehensive sexual education across Zambian schools. Teaching both girls and boys during their formative years is crucial, and with the curriculum covering themes such as bodily autonomy, this should support efforts to address rape culture.

We can collectively progress the fight against sexual violence by investing in grassroots organisations like Sistah Sistah Foundation. Culture evolves and changes over time, it is up to us to get rid of harmful aspects of our culture. Our world needs to be a safer place for all of us.