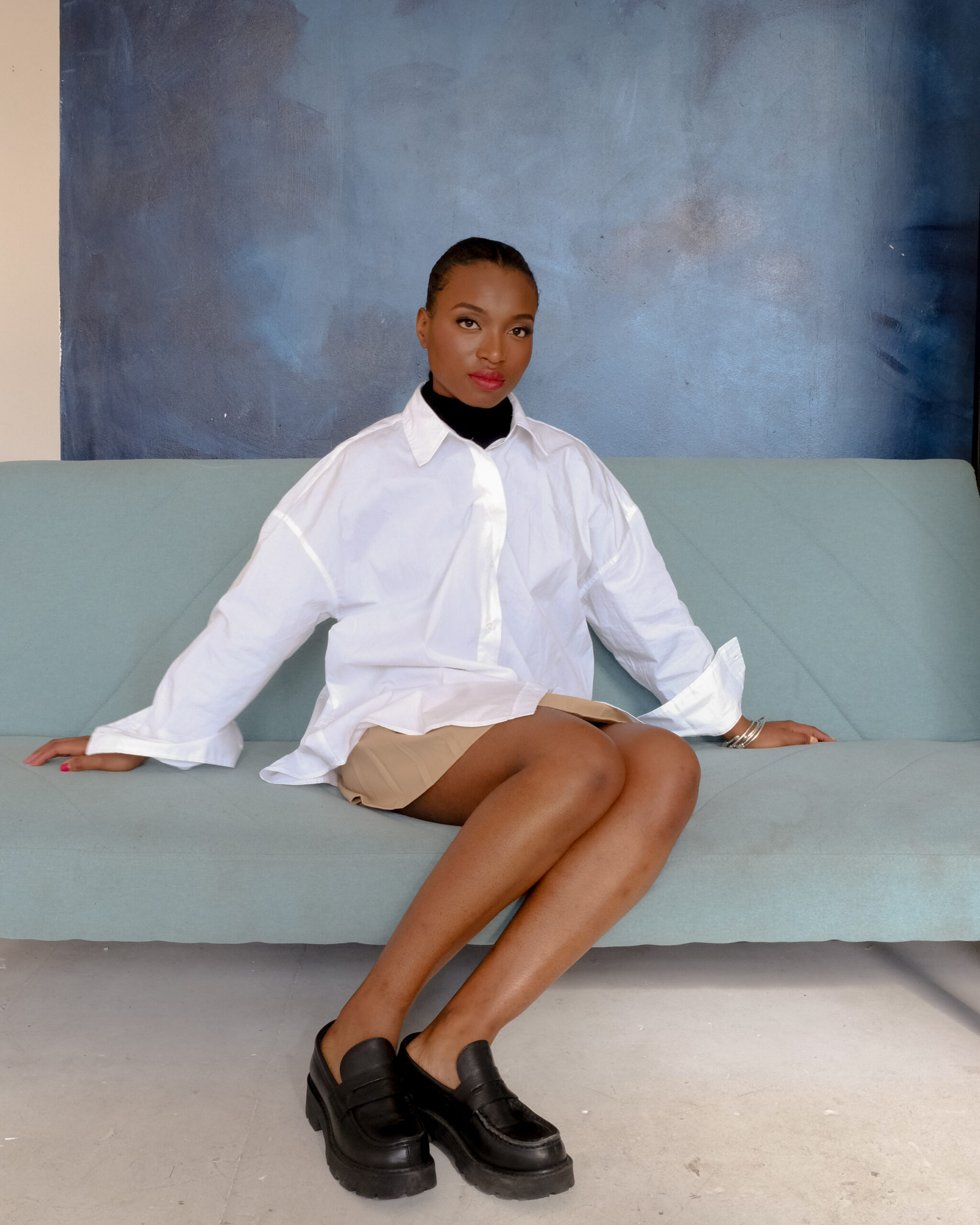 Kem Kem, formerly known as the Kemist (she reasons her name change down to an artist in Jamaica going by the same alias), and I sat down to connect on a briskly cold January day. Riding high off the back of opening for the Grammy-nominated rising star, Tems – one of her biggest gigs to date – Kem Kem is enthusiastic to tell-all about her journey into the music world. The 27-year-old Nigerian DJ notes a global influence on her curation style that reflects her travels in and out of Nigeria. Now in London, Kem Kem hopes to surpass last year’s success across music and film, with an upcoming show in March, among other exciting projects.

You are a producer, musician, and all-around creative. What would you say started your interest in these pursuits, especially DJing?

I think my interest in music and the arts really starts from when I was really young. My dad has a huge CD collection – over 2000 CDs. We listened to everything from classical music from Beethoven and Bach, to reggae like Lee “Scratch” Perry, to RnB like Mariah Carey and Christopher Williams.

I remember him saying that when I was younger, sometimes, I’d cry when listening to music that touched me – not from sadness, just from being moved. I think that speaks to the fact that I’ve always had a deep sensitivity to music.

Would you say that your parents have always encouraged you to go down a creative route when you’ve expressed that interest? In Nigerian culture and African households in general, there’s a real focus on more traditional career paths. Jobs such as being a lawyer, a doctor, an engineer, et cetera, are deemed “safe” and “secure”.

My family is deeply musical and creative. My dad is a lawyer but loves music, and my mum’s an architect, but she’s really an intensely creative person in general. I don’t think they’ve explicitly pushed me into the arts, but our home was always one with music playing, where arts and crafts were encouraged. My friends would come in, and my mum would always organise for us to do something really fun and creative.

I don’t think it was necessarily the ideal career path for me to go down. My parents still value things like stability and the sort of reassurance that one of the more typical jobs that you mentioned guarantees. But I don’t think they were surprised, and they are super supportive of me. They come and watch DJ sets, they help drop me off, pick me up – just extremely supportive, and I couldn’t ask for better.

We just have a long legacy of creatives; I’m related to the Lijadu Sisters, who are twins – huge singers in the ’70s. And my grand uncle was an organist at All Saints Church in Lagos. Music and creativity aren’t things my family are scared of. We embrace it.

You’ve had a lot of exposure outside of Nigeria, having done your undergrad and masters at Stanford in the US. You also went to boarding school in the UK. Tell me about these experiences.

I grew up in Nigeria and lived there until I was 13, fully. Then I came to England to boarding school when I was 13. I spent five years in England and then went to America. I went to Stanford for my undergrad and graduate studies, where I studied philosophy and politics. It was the best experience ever.

It was actually at Stanford when I started DJing. I met so many friends from all over the world who shared so many different forms of music. In fact, one of my friends, Ali, was the first person to teach me how to use DJ decks. I’d say Stanford was truly one of the most intellectually stimulating and broadening experiences of my life.

Listening to some of your mixes, I noticed the blend of genres present reflects that international experience. While I think Afrobeats dominates, you’ve also got a lot of US hip hop, UK rap, and more. With this in mind, how would you describe your sound?

I’d say my sound crisscrosses the Atlantic, much like my experience. I’ve always found it fascinating how I grew up in Legos, Nigeria, but I really loved Bay Area music. I didn’t even know that was where it was from until I went to the Bay Area. Stanford is in the Bay Area, in California. When DJing, I’d like these songs that were throwbacks for me, but also throwbacks for people who grew up in California.

There’s an immense power in music to connect people. I’ve always found it so fascinating how individuals all over the world can be having a simultaneous emotional experience without knowing it. I’m very intentional about reflecting my roots and places I’ve lived in my mixes. African music has influenced so many different genres all across the world. I think it’s super important to put Afrobeats and Afrobeat in conversation with music from elsewhere.

Would you say that you have a signature style?

I make mixes that make you feel something and take you on an emotional journey. I try to just feel before labelling what I’m trying to make; I think that’s the most honest way to go about things. I think a style would be for other people to identify. I’m just doing what feels right.

Describe your music curation process for me.

For every event or mix, I usually make about three collections of music I pull on. I’ll try to start a mix off with calm, introductory music and then lead into a more upbeat, exciting playlist. Then the last would have a wind-down feel. Sometimes I do that. But it’s really quite fluid. I’m just constantly finding new music and categorising it, so it makes my job straightforward when I want to make an event mix.

Your mixes include a lot of female vocals, which is something a lot of DJs neglect. Would you say this is a concerted effort?

I think, as a woman, I am drawn to voices that resonate with me. I do really make sure to include that, especially when I’m DJing live because I think parties and events can have a huge overrepresentation of male voices of male music. It’s important for me to share this incredible music with others.

What is your favourite mix in your SoundCloud discography right now?

I’d say my Nothing To Do in Lagos mix is my favourite one on SoundCloud at the moment. I think it’s like a really great representation of all the different genres I like. I have a really longstanding and special relationship with them, and they always provide me with the space to just play whatever I like. That mix is historical. It’s vulnerable. It’s moving. It’s fun. It’s just everything I love about music.

In addition to your solo work, you form ¼ of the all-female, all-African music collective No Fronting. How did you four come together? What’s your goal as a group?

We want to make a space that feels safe and inclusive and fun and free.

No Fronting was conceived after a few experiences I’ve had as a woman DJ that were unpleasant. I think this is something that a lot of women go through where even though you might be years into your craft, you’re still underestimated or not taken seriously, or just assumed to not be as good as your male counterparts. And sometimes, male counterparts aren’t even as experienced as you. I was tired of being the only woman in every line-up. There’s disrespect that comes with that, with men feeling like they’re doing you a favour by including you on the line-up. 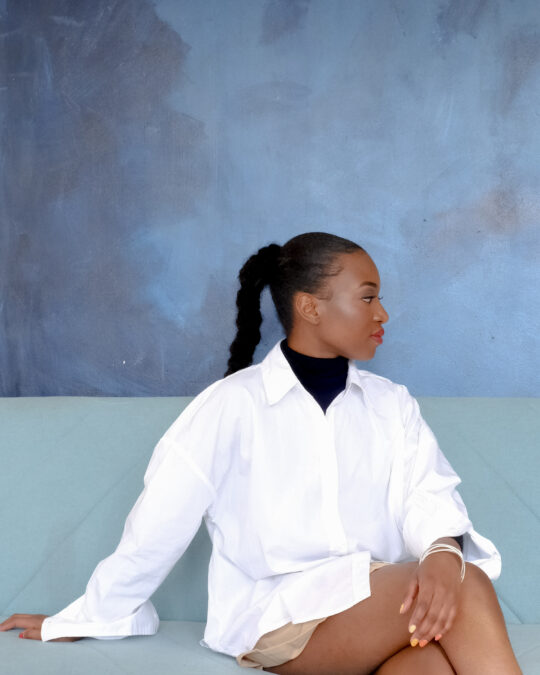 It’s exhausting, but I know my worth. I’m lucky to be surrounded by such brilliant and creative women, and we were just discussing this over dinner, and we just thought, ‘wait, why don’t we host our own parties so that this doesn’t happen anymore? We can finally have a space to dance and have fun where we won’t have to be worried about creepy men touching you, or we won’t have to be running away from a mosh pit’, you know? So yeah, it was a frustration with those experiences that kickstarted things.

Have you ever been under paid when being offered a gig?

Yes, absolutely. I performed at an event at the beginning of my career, and I later found out how much I was paid in comparison to the male DJs who played similar set times and set amounts. It was quite distressing. This was in Nigeria.

A big part of [the problem] in the creative industry is that there aren’t as strict industry standards. There’s a lot that I’ve had to learn on my own. Not really understanding the landscape has left me vulnerable at times to being low-balled or being taken advantage of. I also think the culture of women being raised to be polite and not to cause trouble contributes to the ways in which low-balling is ingrained into these agreements and systems.

In December, you were an opening act for Tems, another Nigerian rising star. How did you end up getting that opportunity, and what would you say that meant for you?

I love Tems. I’ve loved her music and the resonance of her lyrics for a long time, from before she blew up with Essence over the summer last year. I’ve always felt like our brands align. I have an incredible manager, Ayoade Bamgboye, who’s also a member of No Fronting collective. We got in talks with her team, and they gave us the call on the day of the event. It was great. Tems has a wonderful team. I look forward to working with her more in the future.

Also, I think her show is also a wonderful place to be able to showcase and share music from women on the continent. The crowd was super receptive to it; I was super excited to them dance. Their energy was fantastic, and it was just a beautiful experience. I love working with other African women.

What’s next for Kem Kem?

So with No Fronting, we’re going to be hosting a party in London on Valentine’s Day [the date has now been moved to one in March]. The theme’s going to be “crush”. Then for me, I’m also a filmmaker. I love integrating my love for film and music into one thing. In March, I’ll be putting on an experience that integrates my love for film music ever at the ICA, the Institute of Contemporary Arts. And I think for Kem Kem, in general, I just see myself playing at festivals, having my own radio show, hopefully doing a Boiler Room. I’m going to Primavera Sound festival in Barcelona, in the summer. I’d really like to DJ for it one day.

Interview conducted and written by: Hannah Uguru. She is an award-winning writer who is passionate about discussions centring Black Women and the nuances within this identity. Connect with her on Instagram and on her blog.