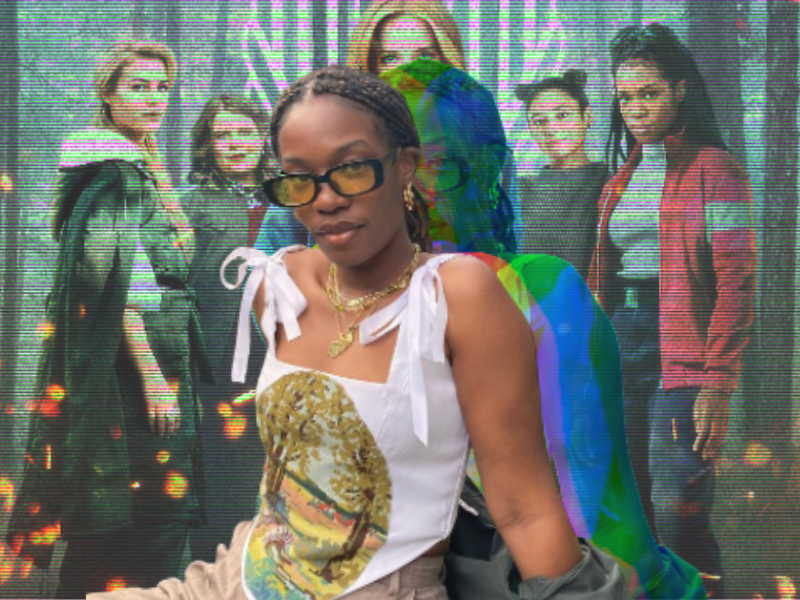 Born and raised in East London, Precious Mustapha is making her mark in the TV and film industry. She now stars in Netflix’s Fate: The Winx Saga as Aisha and caught the attention of thousands of Black Women and girls on social media for the overdue representation.

From the beginning of time, the TV and film industry has replaced Black Women with biracial and mixed-race Women. So, it was a relief to know that the role of Aisha was actually given to one of our own. We see this time and time again in all these shows with the likes of Yara Shahidi and Amandla Steinberg playing Black characters despite being biracial Women, which implies the fullness of Black Women is not needed on our screens.

With Season 2 airing now, I caught up with Precious Mustapha to learn about her experience in the industry, her thoughts on colourism and her role in Fate: The Winx Saga.

How did you first break into acting?

So, I first started acting when I was in primary school. I did some small plays here and there. But it was always like a hobby. And then when I went to secondary school, it was kind of the same, like it was still a hobby. And initially, I wanted to do styling, and I wanted to get into the fashion industry. But my secondary school – during A Levels – wouldn’t let me do Textiles because I didn’t do it for GCSEs. So, my only option was to continue with drama. Then, my drama teacher recommended I check out some drama schools. So, I went to East15 Acting School, got signed and started auditioning for jobs.

What was your first big break?

It was my first job – it was an episode in Endeavour for ITV, and I remember feeling overwhelmed. I had never been on a set before this was my first time being on camera where people are going to see me. It was nice because it felt like a very family-oriented set, where everyone was cool and had worked together before. They made me feel comfortable and I felt at home when working on the show.

Tell me about your experience playing Aisha on Fate: The Winx Saga.

With season 1, I feel like it was more of a taster, as the audience is being introduced to these new characters. There’s so many of us with different backgrounds and stories so it can be difficult to get into each character. However, season 2 is going to be a lot bigger. I feel like it will be a lot grander, and the costumes have developed – we’ve individually made our voices heard regarding what we want, so it’s been a collaborative effort. We worked with a fantastic costume designer.

I know that fans really wanted our costumes to be Y2K-esque because of the resurgence in 2000s outfits and the outfits worn in the Winx Club cartoon. But I also think it’s about having the Y2K aesthetic and merging it with ourselves. It’s about trying to get the right balance and I think we got it right. I love my costume and I’m excited for the season.

We have always been here. It’s just that the opportunities have not, but I do think that it’s getting better.

How was the audition process for Fate: The Winx Saga, especially from the casting point of view as a dark-skinned Black Woman?

It was really good. I remember auditioning in front of the casting director and then I had to do a chemistry read with Elisha, who plays Musa. It went really well. As for casting, it was diverse in terms of people going up for the roles. As for Aisha, I remember there were two mixed race girls, me and another dark-skinned girl. I was hoping that they went for a dark-skinned girl for accurate representation like the cartoon. So, I was really happy when I got the role because I realised how big it was to have this representation and to feel seen.

As you know we don’t often have a lot of dark-skinned Black Women in lead roles, especially in roles where it’s not about being Black, you know, you just are Black. It was important to me and now my younger sister can see a girl who looks like her on screen.

We have always been here. It’s just that the opportunities have not, but I do think that it’s getting better. It is still very slow. But it is getting better. We have Michaela Coel now, and I think she has opened the doors for a lot of young Black Women. We’re getting more Black Women who are writers. We’re getting more Black Women who are producers. I think doors are opening, but it just needs to be at a more rapid pace. We also need more good roles.

What was it like starring in Rashida Seriki’s short film, COLBY?

I really loved it and that’s probably one of the jobs I’ve enjoyed the most. It felt very nice to be in a space where you’re not the only Black person, and I’ve had to navigate white spaces for so long with drama school and my acting jobs. Then I got to do this amazing short film with Rashida Seriki and it was honestly phenomenal.

I loved that she was Nigerian too, and it was just nice because we saw each other, like you see me, and I see you. The script was also amazing because I was playing a very nuanced character, who just happened to be a Black Woman. We need more nuanced and complex roles like this.

Interview Conducted By: Bashirat Oladele – a freelance writer who enjoys writing about pop culture, entertainment, and politics. Her work has been featured in Teen Vogue, Stylist, Cosmopolitan and other publications.