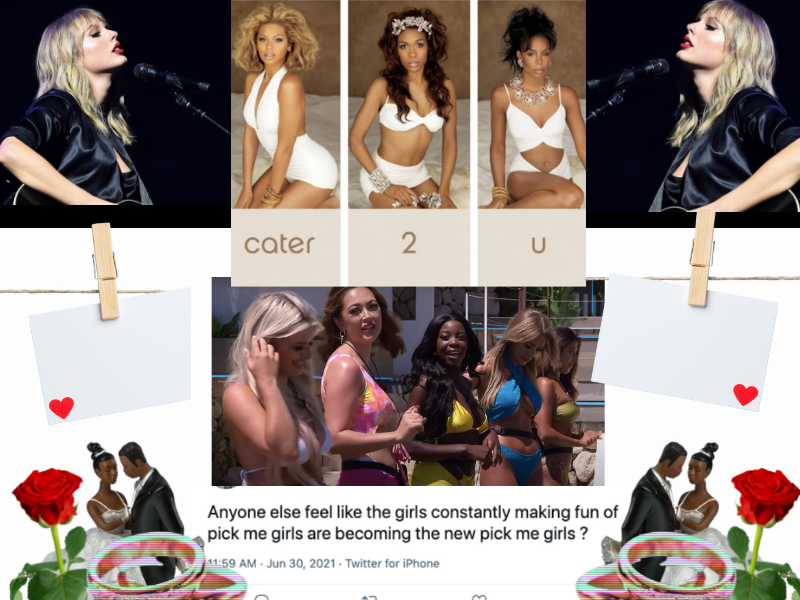 Here’s how culture produces and perpetuates the ‘pick-me’ girl

Here’s how culture produces and perpetuates the ‘pick-me’ girl

Our cultural notions of gender are undeniably complex. These expectations and norms are constantly shifting. Unfortunately, people who challenge these deep-seated ideals are punished for their perceived transgressions. This is evident in the hateful, fear-based narratives that define media coverage of transgender individuals, simply because of their unconventionality.

This constant state of change in gender politics means that dissecting notions of heteronormative romance and desirability calls for chaos. Nevertheless, some views on how men and Women should behave, remain frozen in time, including a woman’s desire to be chosen in love.

Desirability politics permeates the media landscape in an extremely influential way. In essence, ‘pick me culture’ can be summed up as the politics and dynamics surrounding who men chose or select to have sex with or fall in love with, and simultaneously who is ignored and rejected. As a result, romance is an irresistible theme to audiences. This is evident in the great success of dating shows like Love Island.

For instance, this current season of Love Island, like many others before it, saw audiences accurately predict that the Black female contestant would be picked last among other contestants. Fans of the show were aware of how anti-Black beauty standards endure today, despite the collective disingenuous and optic sign of support towards Black people during the ‘Black square summer’ of 2020.

Generally, ‘pick me’ behaviour is the conscious choice to depreciate other Women to make oneself appear more desirable. These destructive efforts reveal internalised misogyny.

Nevertheless, the idea of being desired and picked is highly ingrained in Women’s perceptions of themselves. Social expectations compel Women not to esteem themselves, but rather to compare.

Women receive messaging from entertainment, education, religion and social networks, that if they are not picked, they are not worthy. Ultimately, Women are pressured into constructing themselves in line with male desires and expectations.

On platforms like Twitter and Clubhouse, there have been cyclical debates about Women displaying ‘pick-me’ behaviour. This term appears to capture any ‘desperate’ behaviour that attempts to attract the attention of men, leaving Women to disparage and denigrate themselves. These online conversations also involve shaming other Women to gain male approval.

Generally, ‘pick me’ behaviour is the conscious choice to depreciate other Women to make oneself appear more desirable. These destructive efforts reveal internalised misogyny.

Unfortunately, ‘pick-me’ Women are often traumatised and react by spewing vile retribution upon themselves and other Women. They shift the blame and culpability of male behaviour onto Women. If Women are victims of violence, a pick-me will ignore the perpetrator and ask what the victim should’ve done different. A pick-me will say Women are too dramatic if they only have male friends, and say that other girls who don’t consume alcohol, like sports or enjoy East Asian pop culture are basic.

Despite the venom they spout, their defensive projection of stereotypical views onto other Women is also harming themselves. Hence, some Women shame other Women for choosing not to have children, or for not appearing submissive at all costs.

Some Women will agree to traditionalist views that benefit men and humiliate others for deviating from those ideals. It also extends to any behaviour or opinion aimed at appeasing men’s desires.

And internalised misogyny is more complex than a hatred of Women. Piggot examines the phenomenon by analysing factors that demonstrate a distrust of Women, devaluing of Women, and valuing men over Women.

Consequently, the mentality of a ‘pick-me’ is not just an issue of disrespect and devaluing of one’s gender. It is also a deep intention of aligning oneself with patriarchal structures, including the institution of marriage. Marriage is a centuries old concept that has often afforded Women social status, financial security and identity.

This historical context proves the collective memory and awareness of the benefits Women reap from being chosen by men. As a result of this, ‘pick-me’ culture possesses a universality in music and pop-culture at large.

Specifically, Women receive messaging through music that self-sacrificial adherence to the desires of men will bring priceless rewards. This is evident across a range of genres from R&B to country music and even Hip Hop.

For instance, the song ‘All In Me’ by Brandy has the lyrics ‘Let me be the reason you get through the day…/Think of me baby in any way/I’ll be all you need’. These lyrics denote a need to be the object of somebody’s obsessive desire. This craving for romantic validation is perpetuated by the cultural beliefs fed to Women in film, advertising and of course, music.

Moreover, another song that sparked online debate recently is ‘Cater 2 U’ by Destiny’s Child, the lyrics centre on male fantasies of female subservience. The words in the song paint a picture whereby a Woman’s love is measured by how far she can stretch herself for her partner, exemplified in the lyrics ‘Let me feed you/ Let me run your bathwater/ Whatever you desire, I’ll supply ya’. These lyrics demonstrate how Women’s worth is determined by how far they are of service to men. But it begs the question, is it worth consistently gaining men’s approval at one’s expense?

I spoke to young Women about what their thoughts are on the music that speaks to pick-me culture, and where these sentiments originate.

Timi stated that Black female artists express desire for love in music, suggesting that the art form provides a safe space in a society that demands our resources while desiring us last. She said, “Whether it be love, education or healthcare, Women of colour receive more rejection. Music is often a safe space for Black people to freely explore the idea of wanting to be desired, like love in R&B or wealth in rap and Hip Hop”

Sarah explained how pick-me culture transcends race and class. White Women also receive media messaging that fixates on male desire. She noted, “Taylor Swift’s ‘You Belong With Me’ is like a childhood anthem but pick me af. She gets dragged a lot but her focus on romance means that her music can fall into these tropes very quickly. Her lyrics are centred on men and attention from them.”

Overall, ‘pick-me’ traits illustrate the tragedy of some Women shaming others to feel worthy. However, a larger culture is to blame and must be tackled before we see the abolishing of ‘pick-me’ behaviour. As long as female worth is measured by sacrifice and male desire, nothing will change.

The ‘pick-me’ incorrectly assumes that her hateful gaze towards her fellow Women is an act of elevation, when in reality, it is an act of self-betrayal.

The ‘pick-me’ mindset is extremely unhelpful to Black Women as a group. Struggles to obtain love from a group that perpetuates our social subjugation is not only harmful on a personal level, but on a structural level.

The critic Kate Manne writes, ‘by the lights of patriarchal ideology, a Woman is often expected to play the role of a man’s attentive, loving subordinate—to maintain a loving gaze toward the dominant, metaphorically.’ This argument summarises the ideology of pick-me individuals. A pick-me directs a ‘loving gaze’ towards men who may not have her freedom and desires at heart. What’s more, the ‘pick-me’ incorrectly assumes that her hateful gaze towards her fellow Women is an act of elevation, when in reality, it is an act of self-betrayal.

However, an obsession with Women that appear aligned with male interests is also counterproductive. It can end up further policing Women’s ideological choices pressuring women to be misandrists.

The world will never be simple, and ‘pick-me’ behaviour proves nothing more than the tragedy of laying oneself – and one’s gender down at the altar of patriarchy. Nevertheless, as long as social power lies predominantly in the hands of men, ‘pick-me’ behaviour will endure.