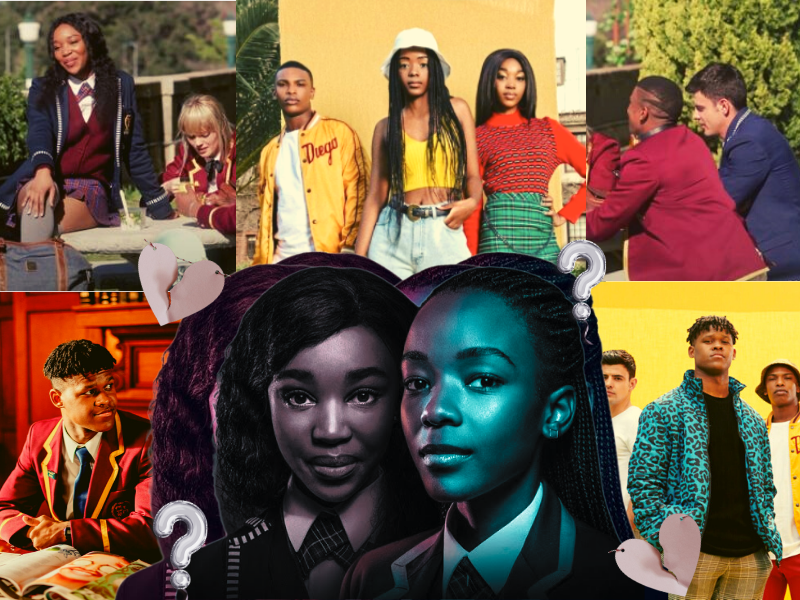 There’s been a fair share of rich kid dramas on Netflix from the one and only Gossip Girl, Elite and now Blood and Water. Released May 2020, Blood and Water tells the story of the impulsive 16-year-old Puleng Khumalo (Ama Qamata) in Cape Town, who transfers to the illustrious Parkhurst High to try and trace down her older sister, who was abducted at birth. It is loosely based on a true story of Zephany Nurse, a South African girl who was taken at birth and raised by another woman and her husband and was later discovered by her younger sister when they became friends in high school.

Black girls are constantly being played by biracial women which is in no way reflective of the experiences of Black girls – and our erasure is violent and deliberate.

Filled with mystery and chaos, this drama was an absolute 10/10 for me, excluding the problematic tropes such as the grooming of Fikile by her simple-minded swimming coach and the drug abuse. Perhaps it was because of how petty the teens were – I mean they are teenagers; and teenagers can be petty whilst solving mysteries and that’s okay. It gave an intriguing insight into the South African private school culture. Puleng was always ready to fight – literally- for her family and I loved that. It’s not a drama where the teenagers are played by 37 years old’s either – Ama Qamata is 22 and Khosi Ngema is 20. Their success was not only global but national too, given the 5 nominations at this year’s South African Film and Television Awards (SAFTAs) – Best TV Drama, Best Achievement in Sound – TV Drama, Best Achievement in Directing – TV Drama, Best Achievement in Scriptwriting – TV Drama and Best in Cinematography – TV Drama.

Not only do I enjoy dramas about rich teenagers (unashamedly), this show made my summer more bearable given the social restrictions due to COVID-19 – it was a delightful distraction seeing young Black Women – not biracial – on screen. I emphasize this because in the Western media, Black girls are constantly being played by biracial women which is in no way reflective of the experiences of Black girls, and our erasure is violent and deliberate. I also appreciated the very normal way Black Women and girls frequently changed hairstyles – this was reflected with Zama’s character (Cindy Mahlangu), who plays Puleng’s best friend.

Nobody wants to see Black teenagers constantly suffering with all these -isms or phobias, sometimes we want to see the mess that comes with just being a teenager

Some Black people viewed the show in the most myopic of ways by constantly focusing on race. Puleng and Fikile are Black but that isn’t what the show is about. It’s not about them navigating racism or any -isms (although we see the intersection of classism with Puleng and Fikile and other Parkhurst students’ wealthy parents), phobias or traumas, it’s about seeing teenagers through a human lens. Blood and Water gave us a human centred story and I thoroughly believe in the West at least, this is why it was popular. Nobody wants to see Black teenagers constantly suffering with all these -isms or phobias, sometimes we want to see the mess that comes with just being a teenager. In the West, it rose to significant levels of popularity because it had a predominantly Black cast. With a country that is 80% Black, it’s not surprising that the stories centred Black teenagers. It’s vital for Black people in the West to remove their preconceived notions and expectations about race, especially when watching shows like Blood and Water – it’s not set in London or New York City. It’s literally set in an African city.

Considering how gender based violence is endemic and devastatingly prolific in South Africa, the show barely touched on it and I wonder whether this was a conscious effort – to leave out Black pain,  suffering and trauma , or whether the focus was solely on the intersections of gender and class. Intersectionality exists in all contexts and statistically, being from less affluent areas exposes you to more violence and atrocities, not to say that wealthier women and girls don’t experience GBV.

Whilst I am not a South African, the show appeared to be reflective of the various racial and class dynamics, from the inclusion of white South Africans who descend from European settlers and the inclusion of Indian South Africans, descendents of indentured Indians brought to work on sugar plantations by the British. I remain critical of my perspectives whilst watching the show, because despite South Africa’s Black majority population like any other major cities, Cape Town is rife with gang violence, drug abuse, poverty, and abhorrent race relations given the history of Apartheid – but Blood and Water barely portrayed this. It’s been critiqued for not showcasing the ‘real South Africa’ which is valid, it mainly portrays those in the upper echelons of society, but surely this is the experience of some and is worthy of representation, like others.

South Africa boasts a plethora of ethnic languages, but we rarely hear the diversity of these languages. Whilst this may be due to the social class and standing of some characters, the show was predominantly in English, with minor incorporations of isiZulu and seSotho. In contrast, Queen Sono (another South African Netflix production and Netflix’s first African production) incorporated various languages from isiZulu, Afrikaans, isiXhosa, Swahili and Shona, among others, which I found refreshing – as all facets of our existence should be displayed. Gone are the days whereby Africans endure ridicule for our tongues, attires, food and more. It’s long overdue that Africans are presented on screen bestowed with the dignity and respect they deserve.

It may not have been everyone’s cup of tea, but I am ready to enjoy my summer with Season 2.