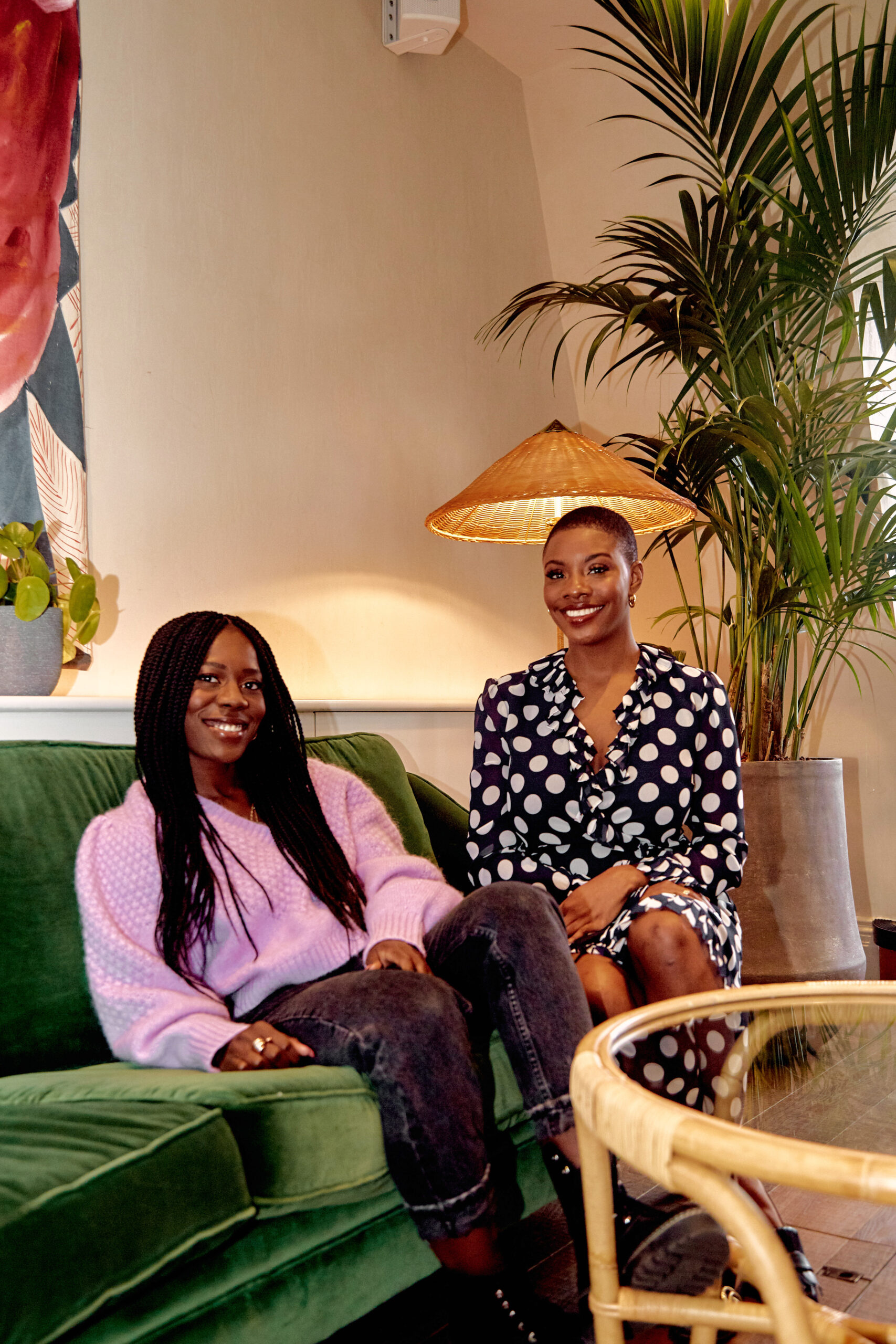 Meeting of Minds speaks with the duo behind the ground-breaking Slay in Your Lane: The Black Girl Bible who are back with a heart-warming children’s novel about friendship, betrayal and forgiveness.

Yomi Adegoke and Elizabeth Uviebinené have a friendship spanning over a decade, meeting at university and being the best of friends ever since. In 2018 they made their literary debut with Slay in Your Lane: The Black Girl Bible, a pioneering joint project where they interviewed 39 successful Black British women on education, careers, representation, dating and health. Their creative partnership continues to evolve, with friendship remaining at the heart of what they do. 28 April 2022 marked an exciting new endeavour into the world of children’s fiction by the duo, with the release of the first instalment of The Offline Diaries.

The Offline Diaries details the friendship of two secondary school-aged Black girls in year 8, Ade and Shanice, told from each of their perspectives — a refreshing take on a youth narrative. We caught up with the two authors to find out more about the book, learning about the ideation and writing process, their own secondary school experiences, and what’s more to come in the series.

The narrative of The Offline Diaries switches between the perspective of Ade and Shanice throughout. What made you two want to take on this ambitious multiple first-person format? We don’t usually see this in children’s books.

Elizabeth: I think it just came naturally because Yomi and I are best friends. We write separately. Sometimes people find that quite difficult to understand, but yeah, we write separately, so it was a very natural format. It was like, ‘well, we can’t write the books together, but we can collaborate’, we’re great collaborators.

Also, I journal. I write diaries and had diaries in the past, so it was a very natural conclusion for sure.

Yomi: Yeah, Elizabeth used to keep a diary when she was younger, and just before we did the kids’ book, we’d written an accompanying journal to our first book, Slay in Your Lane. [The accompanying journal] was all about taking the lessons and advice from Slay in Your Lane and having something practical and tangible like a journal that you could fill in. So, we were already feeling the journal vibe, like, ‘yeah, this is an interesting idea.’

Elizabeth, can you please go into more depth about your experience journaling as a preteen and teenager? Did this help you navigate school experiences? If so, how?

Elizabeth: I think being able to write your thoughts down when you’re younger is just so powerful. So [keeping a diary] is something that helped me throughout my childhood. I don’t think I had any ambitions of being a writer or anything like that — I did it purely as a form of escapism. So, it was definitely like for sure an outlet and a way for me to make sense of the world.

Yomi: Also, with Elizabeth’s experience of journaling, we were thinking about how quite a few young people, especially young girls, keep diaries. You’re not going to get a more authentic idea of someone than their diary.

We also contrasted this format with the social media element in the book; there’s a version of WhatsApp in the book called Chatback. You see how the two talk among themselves compared to their real, authentic opinions and feelings in their diary entries.

You each took on one character’s perspective when writing?

We were really keen to make it feel like it was an emotionally led book; we thought we could better embody each character if we just did one each.

Ade’s character is Nigerian while Shanice’s is St Lucian. You’re both Nigerian; Elizabeth, how did you approach the task of writing about Shanice with this cultural difference?

Elizabeth: It was very seamless, really. I grew up in South London, in Peckham, and one of my best friends growing up was from St Lucia. I was around that culture quite a lot, so tapping into that didn’t feel very far off based on experiences I’d had in the past.

Obviously, I did some desk research, and I spoke to a few people from that community, but I would say a lot of the knowledge came from past experiences.

And why the pivot from adult non-fiction with Slay in Your Lane to children’s fiction with this new project?

Yomi: Initially, I wasn’t really keen about going into fiction at all, whether for kids or adults. But, there had been a big demand post-Slay in Your Lane. Slay in Your Lane was very much one of a kind; there weren’t very many like that around. There were lots of people asking if we could do a Slay in Your Lane for mums, for teens, for men. But we were like ‘we’re just two girls, and our experience is limited, so we can’t do all of those things. But one of the most repeated requests was a Slay in Your Lane for children.

Slay in Your Lane’s not really appropriate for a ten-year-old, and is slightly too deep, and we don’t love the idea of young children internalising a lot of those statistics and making them not want to achieve certain things because it said in this book that ‘Black women are this times more likely not to be employed here’. So, when people were saying they want a kids’ Slay in Your Lane, we were like, we want something that draws on the themes of Slay in Your Lane without being a direct copy.

Another push was the fact that children’s books are among the least [ethnically] diverse sectors of the publishing industry. It is nuts in terms of how few books have Black characters as protagonists.

Yomi: Yeah. Very few Black [characters]. Female? Even less, as is usually the case any time we’re talking about representation. But yeah, we really wanted to do something that was going to empower young Black girls.

What made you two characterise Shanice as Afro-Caribbean, St Lucian specifically, as opposed to another Nigerian?

Elizabeth: It was important for us to not do two Nigerian girls because we wanted to show how they may have different experiences because of these different cultures; their cultures also complement one another. Additionally, growing up in Peckham, I’ve always seen Caribbean cultures and African cultures as quite complementary.

So, we could have made it about two Nigerian best friends, as Elizabeth and I are two Nigerian best friends, but we thought, again, look at that diversity within diversity. Diversity is not just about ‘let’s have Black characters’. We wanted [these characters] to have different family experiences, make them from different countries. We thought it would be a nice touch and a nice reflection of reality.

Elizabeth: It was important for us to include [this variety] without making a song and dance about it. It was just like, ‘Yeah, she’s St Lucian.’ It was part of Shanice’s character but not the focal point.

You could say this consideration bleeds into the characterisation of the novel’s two antagonists as well: the “Double A” girls, Amy Parker, and Aaliyah Saleem.

There seems to be an undertone of racial microaggressions that’s never explicitly addressed; their races and ethnicities are never confirmed, just alluded to through their names and a reference to their blonde and black straight hair, respectively. Was this ambiguity intentional?

I think in the next book, that could be more apparent, but overall, we want to leave it open. We didn’t want to go in-depth about their races because I don’t think it would have added anything. But, maybe in the next few books, [race] could add a dynamic as they advance through secondary school.

Yeah, as Shanice, who is Black, is bullied by these two girls, who, going off the context provided, are white and South Asian. Conversely, Ade, who is also Black, is accepted by the two girls. So, I wasn’t sure how much of this racialisation was coincidental and how much of it was intentional.

Elizabeth: This is what I love about fiction because it brings up interesting dynamics and alternative readings. Previously, we wrote about racial dynamics in school and how they can play out with teachers. But we also spoke about this among pupils. Yomi’s school was quite mixed, but my school was predominantly Black, so race wasn’t something I was really thinking about until I was older.

But yeah, race is definitely something that we would want to explore more in the next few books. But for this book, it was very much an opportunity for [the protagonists] to find their feet through friendships.

You two have a three-book deal. Besides more direct conversations about race, what else can we expect in the upcoming instalments of The Offline Diaries?

Elizabeth: Family dynamics are something I’ve always been fascinated about, and that’s why I loved the Jacqueline Wilson books because she didn’t always write about a nuclear family. I didn’t have a nuclear family — mum and dad with 2.5 children — which is what you see in a lot of children’s books.

So, I really am intrigued by the family dynamics of booth because Shanice has a single dad. We have Aunty Kim (Ade’s aunt and a love interest for Shanice’s dad), and there’s a question of whether something happens there. Then there’s Ade and her stepdad, who she grew closer to by the end of the book. How will that play out in the future? I’ve always been interested in family dynamics, particularly because you can choose your friends, but you can’t choose your family.

Even culturally, Nigerian culture is very different from St Lucian culture, with different nuances and expectations of education, for example. We spoke about this in Slay in Your Lane.

Interview conducted by: Hannah Uguru. She is an award-winning writer who is passionate about discussions centring Black Women and the nuances within this identity. Connect with her on Instagram and on her blog.

All images courtesy of www.wearemediahive.com