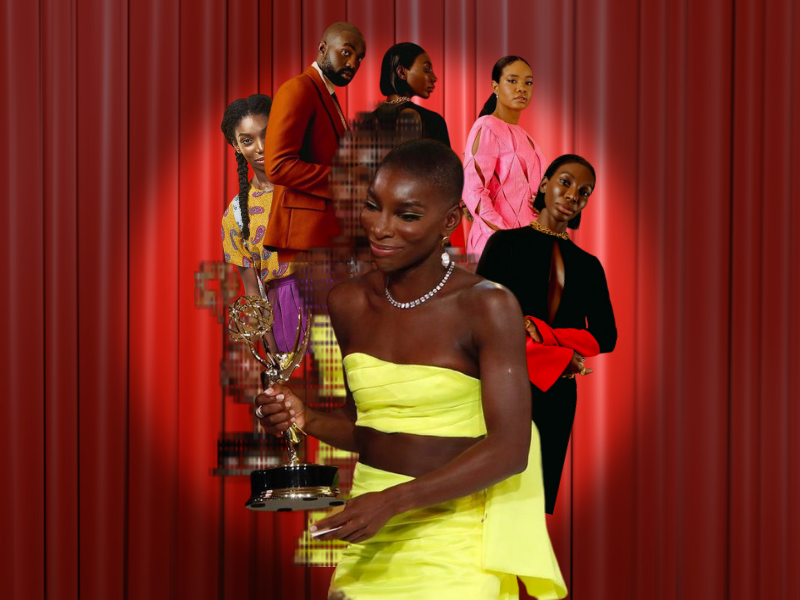 #BHM Michaela Coel: Emerging from silence to tell a resounding story of survival

#BHM Michaela Coel: Emerging from silence to tell a resounding story of survival

You may know her from Chewing Gum, Been So Long, Black Earth Rising, I May Destroy You or for being the first Black Woman to win an Emmy for Outstanding Writing for a Miniseries, Movie or a Dramatic Special. Born Michaela Ewuraba Boakye-Collinson in 1987 at the height of Britain’s rebellious alternative comedy phase, 34-year-old Coel is in many ways an exemplar of her ambitious generation. She’s proudly working class, of Ghanaian heritage, brought up in Tower Hamlets by her mother, a devout member of the Pentecostal church who instilled her religion into Michaela and her sister.

It’s 2021 and being the “first Black Woman” to win anything is disappointing, but Coel deserved it. So, in celebration of Black History Month, this article is to honour Michaela Coel’s achievements, and to recognise her immense impact on the British arts industry.

At the 73rd Emmy Awards, Michaela looked overwhelmed. She won for writing I May Destroy You, a show portraying the realities of sexual assault and the aftermath of it, based on her own experiences. Delivering a short speech, she dedicated her award to “every single survivor of sexual assault.”

“for visibility these days seems to somehow equate to success, do not be afraid to disappear – from it, from us, for a while. And see what comes to you in the silence.”

Coel had some advice for aspiring storytellers, urging us to “write the tale that scares you, that makes you feel uncertain, that is uncomfortable. I dare you.” Her words resonated with me, prompting me to constantly write my opinions, provoke thought and conversation. She also continued “in a world that entices us to browse through the lives of others to help us better determine how we feel about ourselves, and to, in turn, feel the need to be constantly visible — for visibility these days seems to somehow equate to success — do not be afraid to disappear,” she emphasised. “From it, from us, for a while. And see what comes to you in the silence.” Now, this is crucial, as she reminds us to sometimes take a break and not being afraid to withdraw – it’s in these moments where inspiration can often come to us.

Coel is an alumni of Talawa, the UK’s oldest Black theatre company, where she  participated in their summer school programme. Coel obtained a 2.1 in English at university, and then enrolled at the Guildhall School of Music and Drama, where she was awarded the Laurence Olivier bursary, graduating in 2012.

She began performing her own poems as ‘Michaela the Poet’ at spoken-word nights in small venues across London. Coel’s background as a classically trained actress led her to small parts in TV work written by others, such as episodes of ‘Top Boy’ and ‘London Spy’.  In 2013, she made her stage debut at the Bush Theatre, performing ‘Chewing Gum Dreams’, later in the year transferring to the National Theatre, where she would return in 2014 to appear in ‘Medea’.

Black Britain’s funniest sitcom, Chewing Gum, began its run on Channel 4. Her character, Tracey, uber religious and Beyonce obsessed enters a brand new world of womanhood and has to navigate this living in East London. As hilarious as this sitcom was, Coel’s experience on the show inspired the Emmy nominated series, I May Destroy You. Whilst giving an Edinburgh TV Festival keynote speech in 2018, Coel admitted that she had been drugged and raped while writing the second series of Chewing Gum.

She waved off the #MeToo train, deactivated her social media accounts, retreated to a lake in Italy and got to work. Two years later she emerged with I may Destroy You – a story exploring the legacy of rape, consent, trauma, catharsis, and forgiveness. Michaela acts as an inspiration for people who need an extra push, a push to believe in yourself and constantly back yourself. She turned down Netflix’s $1 million offer for the sake of ownership – they wouldn’t allow her to retain a single percentage of the copyright and even parted ways with the CAA (Creative Artists Agency) for pushing her to take the deal. Instead, she pitched to the BBC and they offered everything she wanted –  from “a seat at the table on the production side” to “full creative control and the rights to the work.”

In September she released her first book. Misfits brings us into Coel’s personal life and experiences, touching upon her life in East London, her love for theatre and storytelling and champions radical honesty, transparency and emphasises the need to regard one another with respect and care.

As with Chewing Gum, I May Destroy You is proof that the more specific the story, the more universal the reach. Both are rooted in precise autobiographical truths and defy the formula of what should make hit TV.

Written By: Bashirat Oladele – a freelance writer who enjoys writing about pop culture, entertainment, and politics. Her work has been featured in Teen Vogue, Stylist, Cosmopolitan and other publications. For more of her work, check out her blog