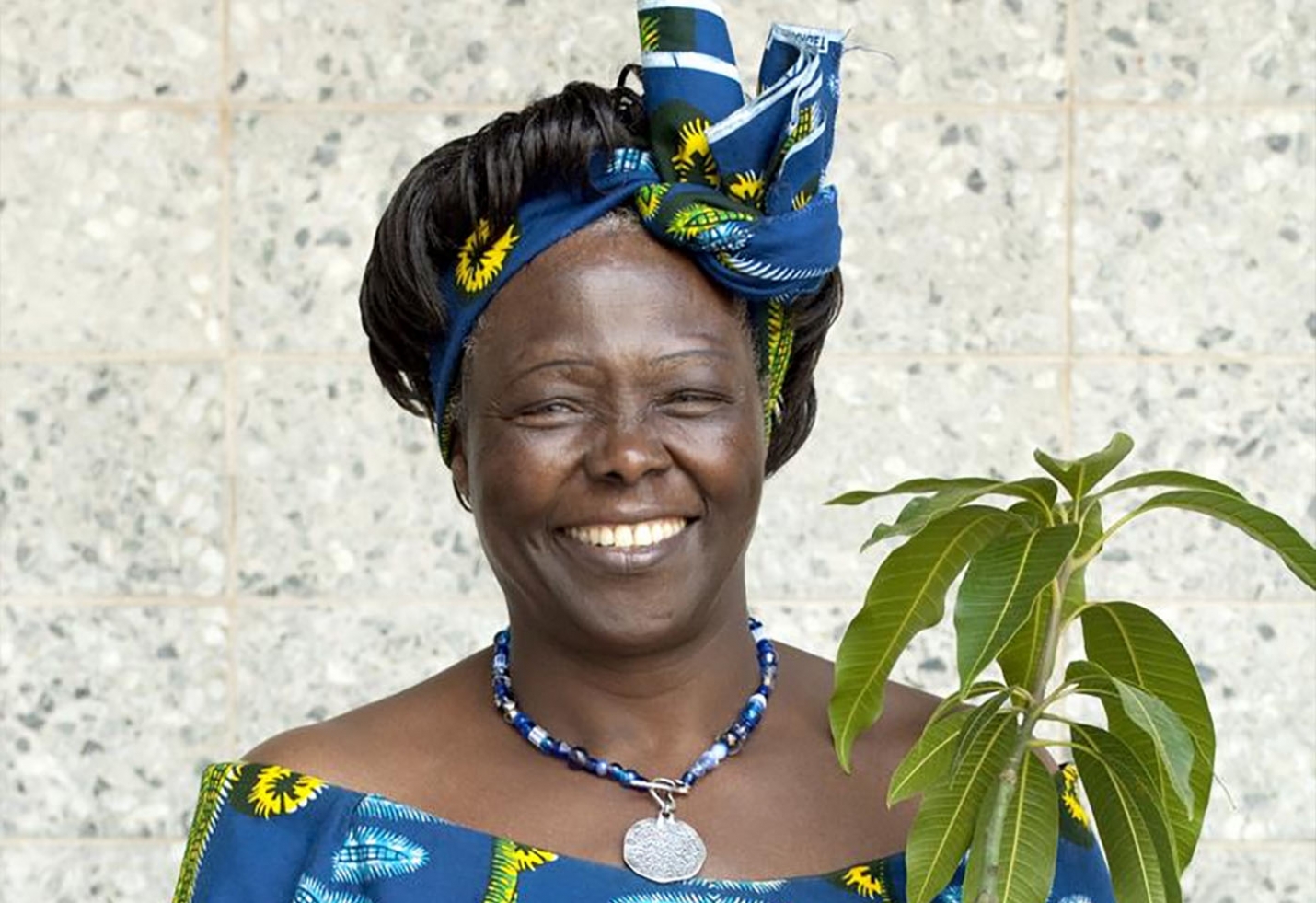 #BHM ‘Wangari Maathai: The Environmentalist who Changed the World

#BHM ‘Wangari Maathai: The Environmentalist who Changed the World

A child from humble beginnings, from the highlands of Mount Kenya, planted a seed that went on to transform a continent. Wangari Maathai was formidable and used her voice and platform to help women gain access to economic opportunities while correcting the damage of deforestation.

Maathai was born on April 1, 1940, in Nyeri, Kenya. The Republic of Kenya is located on the eastern coast of Africa and is divided into seven provinces; Nyeri is the capital of the Central province. She came from a traditional background; her father was considered the head of the house; her mother had very little power and performed traditional “women’s tasks” such as fetching water and gathering firewood. Despite these customary beginning, Maathai went onto achieve more than most men ever have in her country and the world – breaking the mould for young Kenyan women of her generation and beyond.

Education for women and girls, in particular, was not valued or even encouraged in 1940s Kenya. But Maathai was extremely bright, and her older brother persuaded their parents to send her to school when she was seven years old. She did so well in her studies that in 1960 Maathai earned a scholarship to attend college in the United States.

Even after her continued academic success Maathai, never forgot her fellow Kenyans, particularly women. She made it her mission to merge two causes that mattered the most to her – female empowerment and Kenyan vegetation. She had the unique first-hand experience of rural Kenyan society and made it her mission to give women that did not have the opportunity to attend school, a means to make a life for themselves. She also sought to end the devastation of Kenya’s forests and lands caused by development.

In 1977, Maathai launched the Green Belt Movement to reforest her beloved country while helping the nation’s women. The grassroots environmental organisation has assisted women and their families in planting more than 40 million trees across Kenya to protect the environment and promote sustainable livelihoods!

Maathai began her efforts not only to help curb soil erosion but also to help Kenya’s burgeoning population become self-sustaining in its use of wood fuel and create an income-generating activity for rural communities. Meanwhile, the Green Belt Movement conducts seminars for those interested in replicating their approach, and an international chapter has been founded to expand the movement beyond Africa.

In September 1998, Maathai launched and become co-chair of the Jubilee 2000 Africa Campaign, which advocates for canceling the debts of poor African countries. Her campaign against land grabbing (illegal appropriation of public lands by developers) and the rapacious re-allocation of forest land received much attention in Kenya and the region.

She continued to make waves throughout Kenya and in December 2002, she was elected to Kenya’s parliament with an overwhelming 98% of the vote. She represented the Tetu constituency, in Nyeri district in central Kenya (her home region) until 2007. From 2003 to 2007 Maathai also served as Assistant Minister for Environment and Natural Resources in Kenya’s ninth parliament.

Maathai went on to reach a monumental international achievement in 2004 when she was awarded the Nobel Peace Prize. In its citation, the Norwegian Nobel Committee noted Professor Maathai’s contribution to “sustainable development, democracy, and peace.” The Committee further stated that Professor Maathai “stands at the front of the fight to promote ecologically viable social, economic and cultural development in Kenya and in Africa. She has taken a holistic approach to sustainable development that embraces democracy, human rights, and women’s rights in particular. She thinks globally and acts locally!”

Revered as one of Kenya’s most beloved figures, Maathai died at 71 after a yearlong battle with ovarian cancer. Her illness was not widely known until after her death in a Nairobi hospital. Professor Wangari Maathai contributed over many decades to furthering the ideals and objectives of the United Nations.

Maathai strongly believed that her legacy was more than simply planting trees.

It was about inspiring people to take charge of their environment, the system that governed them, their lives, and their future. Professor Maathai became a globally recognised champion for human rights and women’s empowerment.

She was a pioneer in articulating the links between human rights, poverty, environmental protection, and security.

Written By: Thandeka Mujati is a freelance writer. She loves submerging herself in fun-facts. You can follow her thoughts on twitter: @tha_05 or find her pieces here