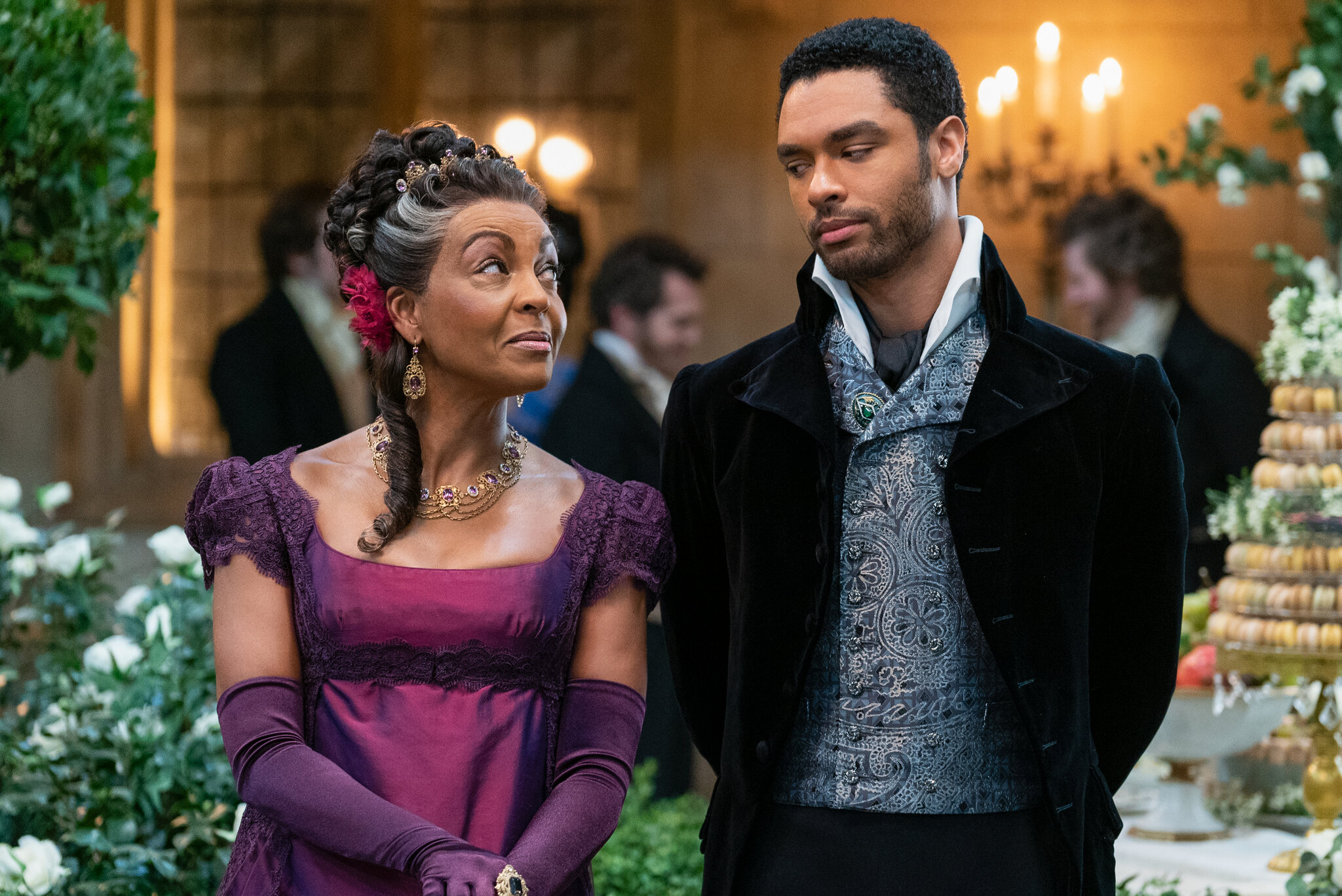 Bridgerton Taunts a Vision of Liberation in a Shroud of Oppression

Bridgerton Taunts a Vision of Liberation in a Shroud of Oppression

A discussion on British manor houses and black femininity placed within the context of Bridgerton – examining how anti-blackness and colourism informs historical representations and modern day depictions.

Ruffled collars, tight corsets and tuxedos waltzing on a backdrop of meticulously polished glasses, detailed paintings and regal furniture. Four walls filled with the decadent aristocracy during the 19th century, with the manor house at the centre. This type of narrative usually evokes images of white faces and white bodies, but in this story, brown skin drips through the casting.

Bridgerton is a Netflix series that was released at the end of 2020 and has been renewed for a second season. It follows the lives of those in upper-class British society during the Regency era. The main storyline revolves around women from noble families searching for marriage to respectable men in order to uphold the stratified class structure.

The series has drawn a lot of attention due to its multiracial casting, where Black and white nobility live side by side, a seemingly conscious decision considering the anti-racist movement of last year. It is, therefore, difficult – almost impossible – to not critically assess the show against perceptions of Blackness or acknowledgement of Britain’s dark history of slavery and colonialism.

One central discussion that can be drawn from Bridgerton surrounds the British manor house. Fittingly, in September 2020, a couple of months before the premiere of Bridgerton, the National Trust released a report detailing the links between their manor houses and the historic – and current – oppression of Black people. The report reveals how one-third of National Trust properties are linked to “colonial histories”.

With much of Bridgerton being set within the British manor house, this presents a dichotomy of representation. The Black characters live and interact within these luxurious buildings, yet these very buildings have been proven to perpetuate notions of white supremacy. For example, and as noted in the National Trust report, many of these estates were built or refurbished through the profits generated from slavery and colonialism. Some of the money also directly comes from the British government’s compensation to slave-owners when slavery was abolished.

On top of this, the manor house has long been a tool to uphold “Britishness”, as defined through a structure of white male hegemony and entrenched classism – a realm unattainable to many and one that was created in direct contrast to notions of Blackness, Black femininity in particular.

Within the history of the British empire, white men drew territorial borders through violence and domination, whereas white women drew moral borders through the domestic sphere where, as stated, the notion of Britishness was built. The apparent purity and benevolence of the white woman, the superiority of the grand home and the virtuous white family structure has acted and continues to act to degrade the Black woman’s capability in managing the domestic world, therefore leaves her outside the realm of British respectability.

This is one reason why Bridgerton is so interesting; it presents the Black characters in a realm that has supposedly overcome racial discrimination whilst its walls simultaneously bleed white supremacy. In the topical context of last year’s pro-Black movement, many view this “racially-equal” world as progressive. However, this is a red-herring, with the show actually working to degrade the Black community. It pounds the idea that, as Black people, liberation equals a seat at the pernicious table of oppression.

This is somewhat reminiscent of the misguided intent of Hamilton, which is similarly a period production. It presents the early history of the United States through a diverse cast in which the Founding Fathers are Black people who tell the story through historically Black music, such as rap and hip hop. To many, this a remarkable display of racial progression, with Hamilton breaking records and winning awards as one of the most successful musical theatre productions of all time.

However, let’s get one thing straight: colour-blindness does not act to fix a wicked system as closing your eyes does not heal a visceral wound.

It will never be progressive for Black people to take on the cloak of the oppressor.

Even within the narrative of Bridgerton, the representation of the Black characters acts to uphold derogatory stereotypes of Blackness. For example, the Black male protagonist, Simon Basset, is promiscuous and so-called “defiles” Daphne Bridgerton (a young white lady looking for marriage) by being sexually forward with her. This overtly reflects the racist Black male predator/ white woman victim paradigm – a narrative that has been insidious since slavery as a way to demonise and kill Black men.

Similarly, the main Black female character Marina Thompson, who arrives in London after being sent by her family to enter noble society, is a symbol of deviance. It’s later discovered she’s pregnant outside of wedlock and is, thus, looked upon as a ruined woman. In the show, she very much fits the mould of the “Jezebel” stereotype – a seductress who captures white men into her deviance. This tired narrative has historically been used to present Black women as sexually corrupt.

In both these instances, lines are drawn between whiteness and Blackness, which naturally magnifies difference and harbours the protection of these demeaning stereotypes. The rigidity of these borders are extended as we also acknowledge the role that colourism plays within the narrative.

The central Black characters of the show – as mentioned above – are light-skinned. In fact, the dark-skinned characters featured are largely dotted around the scenery as the silent nobility or servants. Lady Danbury, who functions as a ‘safe brown’ character, principally plays the role of an aid the lovers Daphne and Simon to find each other, being somewhat reflective of the condescending “magical negro” trope. Simon’s dark-skinned father, who is emotionally abusive and absent, reinforces Blackness as dangerous as dysfunctional, enhancing the insidious stereotypes found within the show.

Bridgerton is destructive in its aims to go beyond racism and creating a progressive society. It does nothing to address and subvert racist depictions of Blackness. This trend to randomly add Black characters in a storyline that does not serve their liberation upholds the system of white supremacy.

In order for us to gain true parity in this society, we must paint narratives that support our cause. Black bodies suited in decadent capitalism is not it, so let’s stop pretending that Bridgerton is a story for us.

Written By: Lisa Insansa Woods – a freelance journalist, creative and activist based in the UK. Dedicated to the cause of liberation, her works explore the flawed concept of race, perceptions of Africa, identity and marginalisation. Follow her on Instagram & Twitter and check out more of her work here