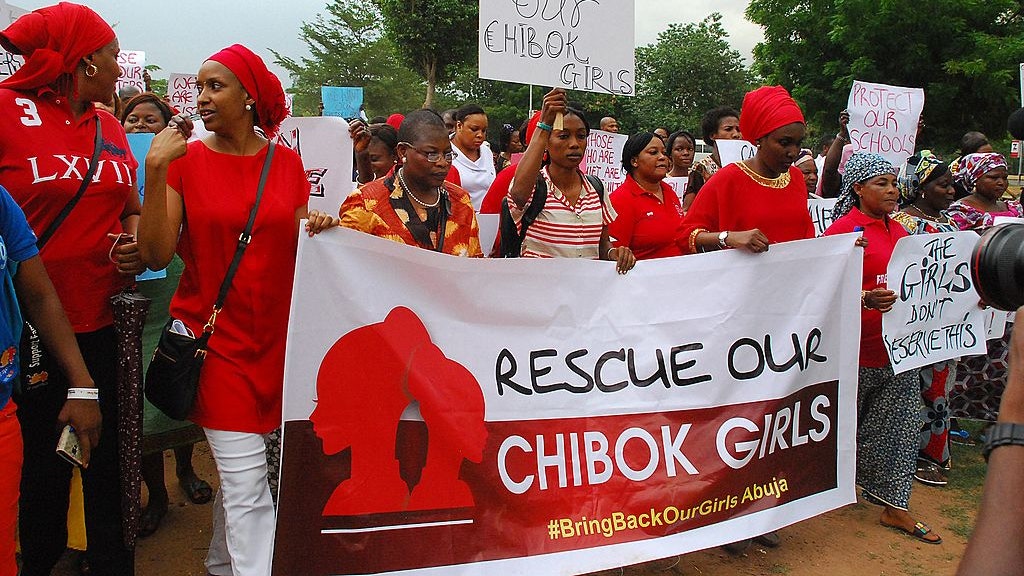 The heart-stopping and definitive account of the rescue mission to free hundreds of Nigerian schoolgirls, and their heroic survival, after their 2014 kidnapping spurred a global social media campaign that prompted the intervention of seven militaries, showing us the blinding possibilities—for good and ill—of activism in our interconnected world.

In the spring of 2014, American celebrities and their Twitter followers unwittingly helped turn a group of teenagers into a central prize in the global War on Terror by retweeting #BringBackOurGirls, a call for the release of 276 Nigerian schoolgirls who’d been kidnapped by the little-known Islamist sect Boko Haram. With just four words, their tweets launched an army of would-be liberators, spies, and glory hunters into an obscure conflict that few understood, in a remote part of Nigeria that had just barely begun to use the internet.

When hostage talks and military intervention failed, the schoolgirls were forced to take survival into their own hands. As their days in captivity dragged into years, the young women learned to withstand hunger, disease, and torment, and became witnesses and victims of unspeakable brutality. Many of the girls were Christians who refused to take the path offered them—converting to Islam.

But now a book, due to be published early next month, will reveal the reality of life for the more than 200 women from the school in Chibok, who were kept as hostages in one of the most infamous mass abductions of recent decades.

“We wanted to tell the story of how these women survived, but also the story of why it took so long to free them in spite of, or perhaps because of, the social media campaign,” said Joe Parkinson, a co-author of Bring Back Our Girls, which is based on hundreds of interviews with the students, family members, former militants, officials, spies and others involved in their ordeal.

Among the students was Naomi Adamu. Her defiance began when the extremists told the students to swap their school uniforms for a black, flowing, all-covering garment. The 24-year-old kept her chequered blue dress, and then, risking a beating or worse, she began a diary.

Adamu wrote on the days when it was safe, after compulsory lessons on the Qur’an and foraging for meagre rations from the forest.

The small act of rebellion gave her strength. When her Boko Haram minders told her she would be killed if she did not convert, marry a fighter and bear his children, she refused and was beaten with the butt of a rifle.

Her captors did not follow through on their lethal threat, nor were she or the others who refused “marriage” subjected to sexual abuse. But they were condemned to backbreaking labour as “slaves”.

A small group of the most defiant students was separated. Adamu, their leader, was dubbed “the chief infidel” by furious Boko Haram leaders.

Naomi Adamu, the Chibok student who led resistance among the women to their Boko Haram captors. Photograph: Mohammed Bukar

“When they realised we don’t wear hijab like the other girls they beat us and said they would cut off our heads. They made us wear hijab and pray but we decided together to fake the ceremony. We mouthed Christian prayers and told each other the story of Job,” said Adamu.

Once again the students were told they would be killed if they did not submit and convert. Again the small group of rebels refused.

“At a certain point we had seen so many bodies, we were no longer afraid to die,” she told the authors.

When Boko Haram tried to starve others into obedience, Adamu helped organise a clandestine supply of rice to fuel resistance. The tactic worked, and more and more students began to renounce the faith they said they had adopted only out of fear.

But beyond the forest, attempts to rescue the students were flagging.

“Twitter generated outrage … but not the actual means to free anybody,” said Parkinson. Nigeria’s feuding spy agencies called off a series of early deals, which probably would have freed all of the girls. The president himself suspected that the abduction was a hoax, set up by political rivals. Key informants close to Boko Haram were arrested by Nigeria’s military. A British spy plane sent to search for the women broke down en route to the country. Mutual distrust and poor relations with the Nigerians hindered the work of the 38 strong “interdisciplinary assistance team” deployed by the US. A botched air strike on Boko Haram’s headquarters left 10 of the girls dead and 30 or more injured, some maimed for life.

But Adamu remained determined to resist. “Partly I was strong because I was angry. I was angry we had been kidnapped before graduation,” she said. “And I was angry when 30 girls converted to Islam and got married … I felt some didn’t fight hard enough. It divided the group and weakened our resolve. People accepted they wouldn’t go home,” Adamu said.

Time was running out. The students were close to starvation, their rations were cut again and again. There was hope, however. Boko Haram was weaker than it had been since its resurgence in 2009, and increasingly fractured, with factions divided over what to do with their globally famous hostages.

The wife of the vice-president of Nigeria, Dolapo Osinbajo, consoles one of the 21 released Chibok girls in October 2016. Photograph: STR/EPA

While the world’s most sophisticated surveillance technology sputtered out, a covert Swiss agency and its Nigerian recruits worked painstakingly in the shadows to free the girls. A small team of Nigerian volunteers led by a diplomat from a little-known department of Switzerland’s foreign ministry, the human security division, had been working on a deal to free the students. In October 2016, a first batch of 21 students was released in return for a handful of senior Boko Haram militants. Then, seven months later, another 82. But at least 40 have died in the forest. Dozens are still there.

Adamu, defiant to the end, strapped her secret diaries to her body to carry them to freedom as she walked out through the bush. Driving away, she and the others chanted a Chibok song: “Today is a happy day. The notebooks she eventually brought with her out of the forest provided much of the raw material for the book.

Parkinson, a reporter in Africa with the Wall Street Journal, said the story of the students raised an important question about dealing with extremists.

“The small team that ultimately answered the global demand to rescue the Chibok girls worked in secret for one of the world’s most discrete governments and smallest states. Its success relied not on loudly expressing moral judgment but on suspending it. They tried to reason with Boko Haram instead of denouncing it,” he said.

Adamu remains in northern Nigeria with ambitions to have her own family and set up some kind of business. But she is still not safe. Since the abduction of the Chibok students, Boko Haram has kidnapped more than 10,000 boys as child fighters as well as a similar number of girls and women, who have been used to make ransom demands to their families or forced into marriage.

“Our chief problem is that Chibok is now in danger again … If nothing changes it will only be a short time until one of us is kidnapped again,” she said.

It is a cautionary tale that plumbs the promise and peril of an era whose politics are fuelled by the power of hashtag advocacy—revealing how wildfire social media activism is reshaping our relationship to global politics.

Bring Back Our Girls: The Search for Nigeria’s Missing Schoolgirls and Their Astonishing Survival is by Drew Hinshaw and Joe Parkinson, is available for pre-order now. Published 18th March 2021. RRP £18.99