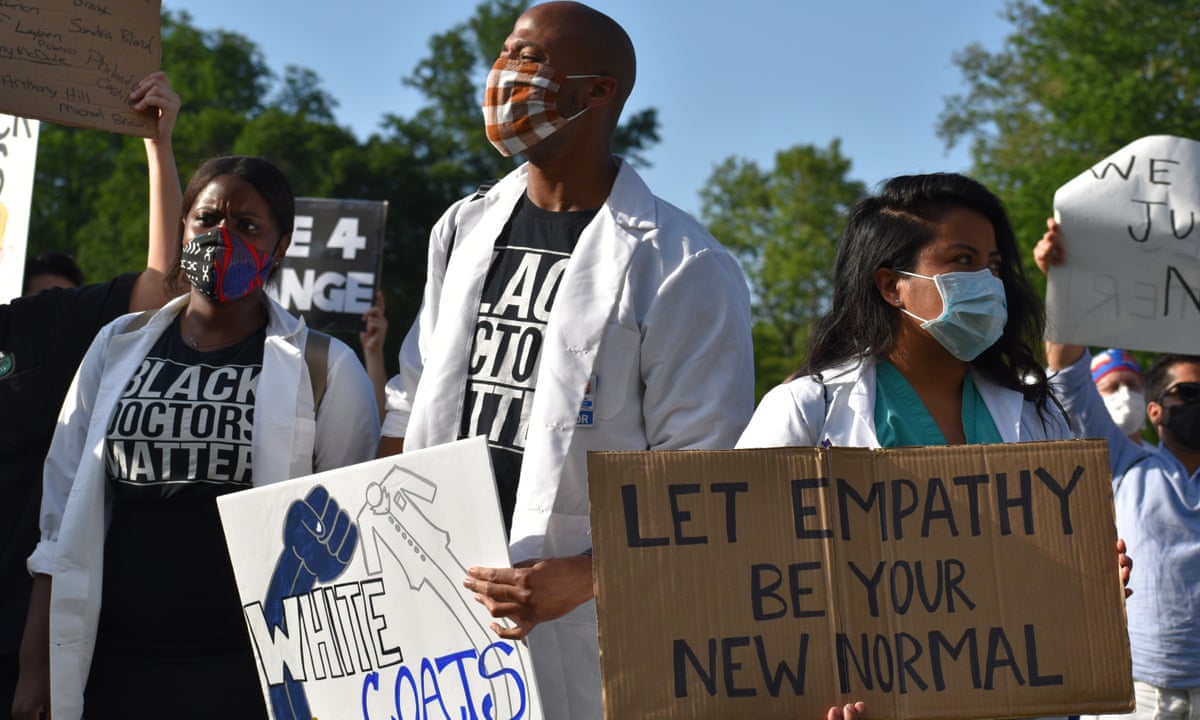 ‘Covid will not kill you as fast as a bullet’: Black doctors go from frontlines of pandemic to protests

‘Covid will not kill you as fast as a bullet’: Black doctors go from frontlines of pandemic to protests

Dr Steven McDonald recently joined a protest against police brutality in lower Manhattan, wearing a white coat and mask, and impervious to the falling rain. Around him, people in blue and green surgical scrubs held up signs like, “Don’t kill my patients”, “White coats for black lives”, and “You clap for us, we kneel for you”.

McDonald, an African American emergency room physician, has spent the last two months treating Covid-19 patients through the peak of the pandemic, when New York City was overrun with people being shuttled between hospitals in search of beds. These were patients, he said, who often looked like him.

“The disease burden was borne by communities of colour,” he said. The virus has killed black people at twice the rate it did their white counterparts.

In some ways, he said, the protests spurred by the murder of George Floyd by Minneapolis police felt like a “natural extension of that injustice” caused by the pandemic. Police kill black men at more than twice the rate than they do white men.

Since March, thousands of black health workers across the country have been on the frontlines of the pandemic, even more so in New York, which comprises one-fifth of the country’s cases and deaths. Now, despite the contentious debate about the public health impact of the protests, many are also joining the nationwide anti-police brutality protests, in hopes of dismantling the racist structures that regularly kill black people both in the streets, and in the hospital.

“Covid will not kill you as fast as a bullet,” said Dr Lukmon Babajide, a resident physician at Rutgers in Newark, New Jersey, who joined the protest.

Babajide, who wore blue scrubs, said that while he was concerned about people getting sick from the virus, the protest felt equally essential to protecting black lives. He said it has become increasingly clear that institutions are not doing enough to speak out against racial disparities, even though it is well documented that black Americans experience worse health outcomes across countless health issues such as maternal health, heart disease and diabetes.

“Anything systemic that continues to put entrenched black people at the bottom and continues to exploit them and kill them, those still aren’t seen as racist,” Babajide said. “Those are just seen as unfortunate facts of life.”

The disparities in how black communities are policed has direct impact on health outside of extrajudicial killings. Abuse from the police and disproportionate rates of incarceration can lead to widespread mental health crises and chronic stress, which are linked to heart issues and other ailments. Covid-19, meanwhile, has quickly spread in jails and prisons, illuminating the vicious cycle of over-policing and arrests on public health.

For black doctors, however, it’s not only about patients and their communities. It’s also about fighting for their own lives, and how they are perceived in a field where they comprise only 5% of the workforce. Physician Darien Sutton, on Twitter, said he was more worried about driving home after curfew as a black man than contracting Covid, and planned not to wear a mask on his walk to the car. A doctor was arrested during a protest in Brooklyn that week.

“Professionalism won’t save us,” said Chioma Iwelumo, a medical student in New York who came to the protest holding a sign for Breonna Taylor, an EMT and frontline worker who was killed by police in her own home. Iwelumo said many health workers experience racism on a regular basis. “When we fight for black people, we’re also fighting for ourselves. This is about patients, but also about me.”

Babajide said he is one of two black physicians in his program. McDonald said putting on a white coat feels like a signal to others that he knows how to operate within a “white system”, even if he is seen differently when he takes it off. This was apparent at a protest last Friday, when police stationed alongside the health worker protest, organized by Frontlines for Frontlines, remained largely distant and hands-off, even when the health workers marched past curfew across City Hall in their scrubs, masks and coats.

Meanwhile, the emotional toll of facing the pandemic and the national dialogue about police brutality could prove heavy in coming weeks. Health workers are already vulnerable to burnout and distress on a daily basis, and have experienced post-traumatic stress disorder symptoms during the pandemic. Coupled with the ongoing stress of being black in America, some of the protesters were bracing for the impact.

“It’s hard every single day. I’ve seen mostly black patients coming to the door with really nowhere else to go. It really takes a toll on you,” said McDonald, who has been coping by reading Toni Morrison and joining the protests.

For some health workers the protests provided an outlet for the grief and anger, and a way to speak out about the racism they witness both in the world and within the halls of their hospitals.

“This is so important because it’s the medicine for both,” McDonald said.