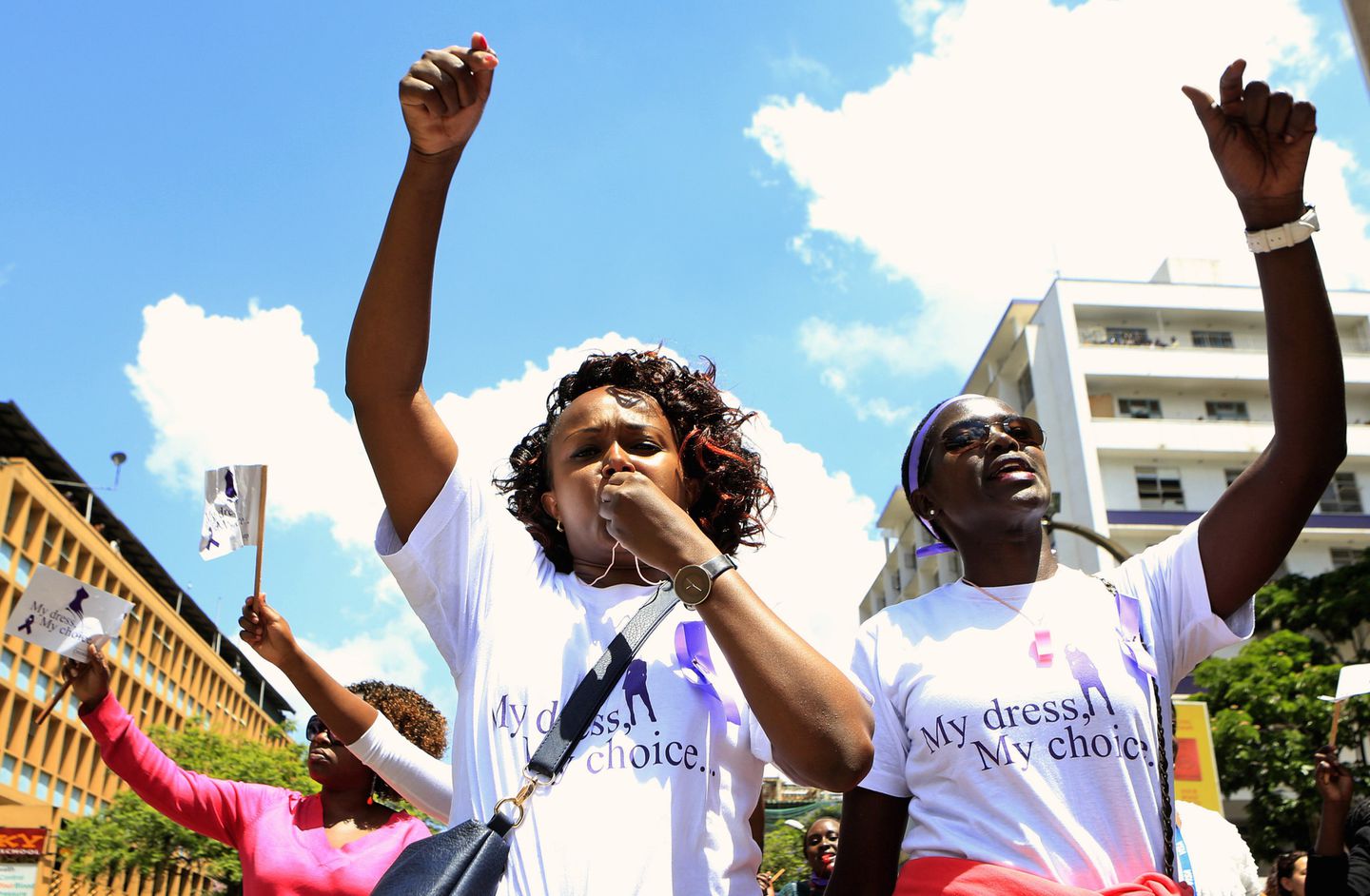 It Must be an Accident: Sexual Assault in Kenya

It Must be an Accident: Sexual Assault in Kenya

The first time I was groped was by a stranger in a matatu, also known as a minibus. It was a hand that ‘accidentally’ brushed my left breast. I remember because I was seated on the donda’s (bus driver’s) seat, which is usually not occupied by passengers. The man was getting on and could not seem to find anywhere to lift himself onto the still-moving vehicle. But it was not an accident because he looked at me and winked while smirking. My first thought was, did anyone see that? Then it dawned on me that I had done absolutely nothing about it. I did not know what to do about it. I was left feeling vulnerable and helpless.

The second time it happened, I was walking from a class with a few of my classmates who just happened to be all female. We had to walk past an abandoned maize field to get to the main road. It’s considered safe because there’s a police station right in the opposite direction. A slow whistle in the periphery of the maize field turned our attention to a man who was watching us and who clearly wanted us to notice him. – or rather, where his hand was. He was stroking a part of his genitalia as he focused on us, the expression on his face a mix of crazed and perverted glee. The absurdity of it all was the policeman who sat outside the police station enjoying mahindi choma as we ran past him screaming. He didn’t stop us, nor did he ask what had led to our hysteria.

Women have taken to social media to recount these horror stories of being publicly groped, with one of the most recent heated discussions taking place on Twitter. Like me, most had become numb and helpless when it happened, not knowing what to do afterwards. In some of the horrific tales, the touts, drivers, and fellow commuters pretended nothing was happening even when the victim asked for help. It was only in one instance that someone else intervened, after a lady raised the alarm and the driver drove into a police station to report the perpetrator who had already broken the woman’s glasses in the ensuing fracas.

In these baffling statistics, only 3% of women stated they have never experienced sexual harassment. Imagine that. And then you ask, what do the men have to say to this?

It sounds like a tired line from an old song, but 90% of men insist women’s attire contributes to sexual harassment. Shocker, no?

A few months ago, during a writers’ residency, a fellow female resident from another African country asked me what the situation was regarding groping in Kenya. I was a bit taken aback because I was not expecting that to be among her first questions. ‘No, don’t get me wrong’, she said, ‘my mother back home keeps calling worried that I might wear something inappropriate that might get me groped’, she further explained. What?! It turns out her mother had read all the gruesome things pertaining to female security in our country. She was just a worried mother wanting her daughter to keep safe. This fear fed into my friend that she never wore skirts or dresses whenever we would go out. She’s not the only one.

In a video on gender-based violence, a popular Kenyan vlogger narrated that she had to make ‘adjustments’ to her dressing when returning to her home country from the UK. Back in Britain, she could wear whatever she felt like, and nobody would bother her – not so much back home, unfortunately. In the video, she goes on to recall an episode where she was taking a walk, and a random man just walked past her and grabbed her breast. She started screaming at him to draw attention, but people continued to walk by as though nothing had happened. She was furious but had little other recourse to take beyond her initial reaction.

‘Offensive’, ‘uninvited’, ‘unwelcome’, and ‘annoying’ are just some of the words that describe my feelings towards sexual harassment. It is a human rights violation and a form of gender-based violence, yet it’s considered the norm.

It does not help that men heap all the blame on women. ‘It’s the dressing’ is a popular refrain. According to the Star’s aforementioned report, only 17% of men would warn the perpetrators while 16% would either do nothing to intervene or reprimand the ladies for dressing inappropriately. Contrary to popular belief, it’s not always young men who are perpetrators. Older men are dotting this unpopular landscape as well. In fact, a lot of school-age girls, especially those in secondary school, report old men fit to be their grandfathers touching them in matatus. Due to the unequal power imbalance in age and social position, these girls often lack the ability to control these dynamics.

In African cultures, respect is based on seniority, with older men automatically occupying the most revered place in our societies. This mentality means young girls find it hard to speak out against their perpetrators even more than the woman, for fear of backlash and enforced shame.

A lack of trust in law enforcement and stigmatisation hinders many victims from speaking out. Most of the handful of cases reported are treated like minor offences, like mere accidents. Only 6% of the cases are recorded, while 32% of those interviewed choose not to take any further action. This is in part due to unclear mechanism on reportage of these kinds of incidences. The Sexual Offences Act (2006) highlights sexual harassment and the legal consequences, but it’s no straightforward when it comes to acts such as groping and verbal harassment. In essence, we are groping in the dark, pardon the pun, when it comes to sexual harassment in public transportation. Adelle Onyango, a social activist and rape survivor, reiterates, “Every woman deserves to be safe twenty-four hours a day, seven days a week.” But how is this possible when the bulk of the ‘responsibility’ is on us? Dress decently lest a man touches you inappropriately. Smile demurely at those lewd comments and feel flattered. It is both a legal and societal jungle, but with steps in the right direction, we might just make progress.

Written By: Esther Musembi – a writer of creative non-fiction, fiction, articles and an active blogger. She is an editor and member of Writers Space Africa-Kenya. She was a participant in the 2nd edition of PenPen Africa that was held in Kenya in March, 2020. The residency culminated in an anthology, Twaweza, which she is part of. Her work was recently published on the Marathon County Public Library on their COVID-19 pandemic issue. For more of her work click here Follow her on Instagram and Twitter @EssMusembi