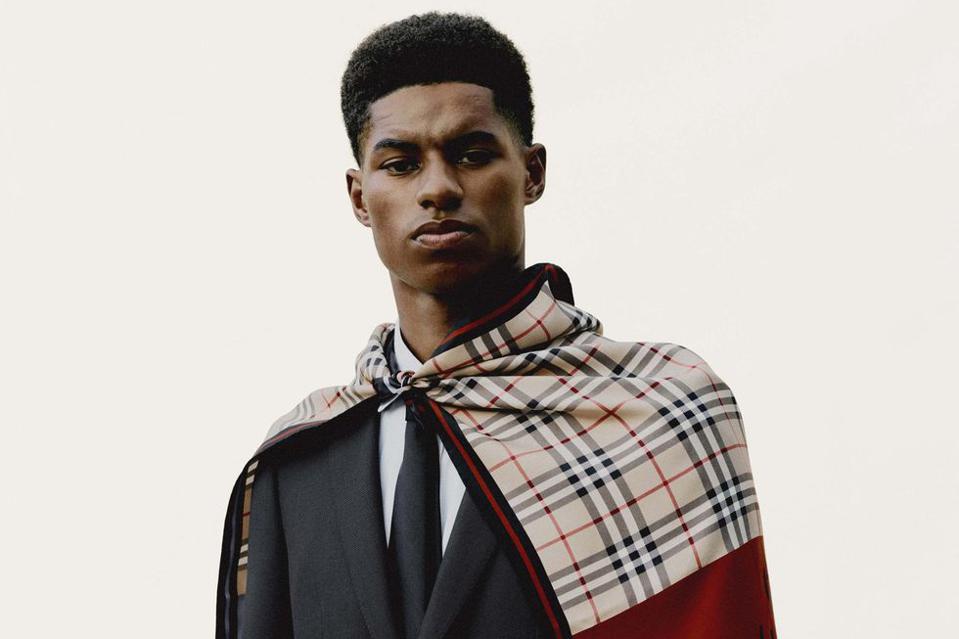 Marcus Rashford Teams Up With Burberry To Support Youth Centres

Marcus Rashford Teams Up With Burberry To Support Youth Centres

Everyone wants to be connected to Marcus Rashford these days, including Burberry, which today announced a partnership with the footballer for a series of initiatives to help disadvantaged young people.

In addition, Burberry will be providing support for arts-after-school non-profit Wide Rainbow in New York and the International Youth Foundation, which works with community leaders and young people across the world.

In London, 15 youth centres selected by Burberry and the organisation London Youth will receive grants. The brand anticipates that this project will help tens of thousands of young people worldwide. London Youth will use the money for meals and support with school work, while Norbrook will be improving their outdoor space.

The announcement of the 22-year-old England striker’s partnership with Burberry today will be accompanied by the publication of a moving letter the footballer wrote to his 10-year-old self.

“When you fall, which you will,” he says, “there will always be neighbours and friends to catch you. There is no need to feel ashamed because they will catch you without judgment and comment. No questions asked. Feel the warmth of those around you and know that one day, you are going to have the platform to repay them.”

He adds: “For a young boy who says so little, one day you will have a voice that speaks for many.”

Pam Batty, vice-president of corporate responsibility at Burberry, said the organisations they were funding were “at the heart of so many young people’s lives”.

“We believe, especially now, it is so important to help them empower the emerging change-makers of tomorrow and continue their efforts to sustain and protect the vulnerable,” she said.

Burberry has provided donations for vaccine research, donated 160,000 pieces of PPE and turned a Yorkshire factory making trench coats into one to make non-surgical gowns for medics and care workers. They have also contributed to FareShare, the Rashford-endorsed food distribution charity, meaning over 200,000 meals can be financed.

This is not Rashford’s first brush with fashion. He appeared on the cover of September’s Vogue, alongside model Adwoa Aboah. In his Editor’s Letter, Edward Enninful described the footballer as “a shining example of how to harness influence for good”.

The Burberry Foundation, the brand’s charity arm, was set up in 2008. As part of this, Burberry Inspire launched in 2018 – bringing art and culture into schools. More than 5,000 students from Yorkshire to New York have been involved. The brand also provides scholarships at universities including Parsons in New York and Central Saint Martins in London.

Like most fashion brands, Burberry has been affected by the pandemic. Retail sales fell by 48% in the three months to the end of June, and it was announced in July that they would cut 500 jobs worldwide. The brand launched the first official designer face mask – for £90 – in August. They were awarded a £573,000 government contract to make PPE in September.

Rashford’s letter to his 10-year-old self

“I encourage you to dream, because sometimes dreams are all you will have. I encourage you to lay your head on the pillow and close your eyes tight and think of better days to come, because luckily for us, our dreams have come true. Would I be the Marcus Rashford you see stood in front of you today if it wasn’t for the hardship and struggle? Simple answer? No. You should never be ashamed to ask for help. Take pride in knowing that your struggle will play the biggest role in your purpose. Never drop your head in shame.

There have been many days that you have felt alone and, in this game we call football, there will be a few more to come. But your family and your community will never allow anyone to dim your light because that light is still needed to survive the darkest days. The noise your stomach has been making, will one day be replaced with the noise of crowds chanting your name. Buckle up little man, it’s going to be quite the ride.

Your community will prove to be the most special extension of your family. When you fall, which you will, there will always be neighbours and friends to catch you. There is no need to feel ashamed because they will catch you without judgment and comment. No questions asked. Feel the warmth of those around you and know that one day, you are going to have the platform to repay them. For a young boy who says so little, one day you will have a voice that speaks for many.

One day you will have a lot of things you never dreamt of owning, but never forget that stability and consistency are two of the most valuable things you will ever experience. The youth centres that you visit today on a Monday, Wednesday and Friday, will prove to be central to all of the greatest gifts you receive in life – your friendships, your discipline, your respect, and compassion for others.

One day you will have the opportunity to travel to lands you never knew existed, to hear languages so foreign, and experience culture so alien. Don’t ever be overwhelmed. Stand tall, with the Mancunian accent that will become so familiar to many. Your youth centre has taught you to celebrate difference. To celebrate those that don’t look or sound like you. And this is one of the greatest lessons you will learn, so hold on to it, as one day you will be stood alongside ten new allies whose only common language is that round ball that has become so important in your life. We do not point fingers, we never have. We wrap our arms around each other and tug each other up at times we are feeling low. Always remember that kindness is power.

The life lessons you will hold so close as an adult, are being taught right now within the four walls of that youth centre. The freedom and safety you are feeling, will one day be felt on a pitch much greater than you can imagine. Never take for granted this safe space as it plays such a big role in mum’s life. You might not be able to see it now, but her smile grows wide and the weight on her shoulders lessens every time you return home with a full belly. One day those football players you idolise will be trumped by a greater hero. A hero that goes by the name of mum.

There have been many days that you have felt lesser than others, but no more. Your voice, your stance, your family, your community, and friends, all matter. Whenever you feel like you have very little, know that there are always people willing to give. Just look at those doors wide open welcoming you in for a snack or a chat. If I had to ask one thing of you it would be this. Please, never go to bed feeling like you don’t have a role to play in this life because, believe me when I tell you, the possibilities are endless”.