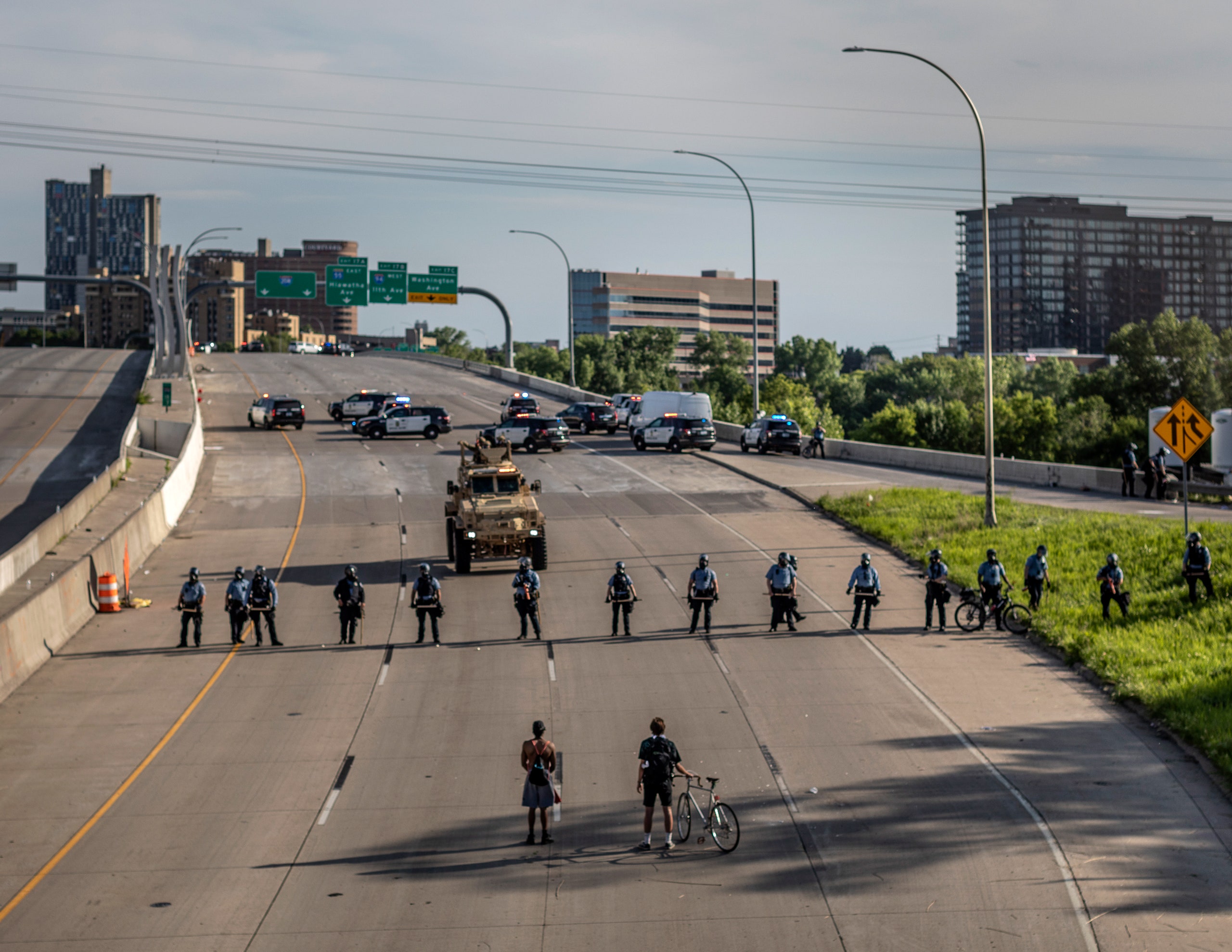 On July 7, 2016, Mark Dayton made a statement that no modern governor of Minnesota had uttered before, helping shift public opinion on the still-nascent Black Lives Matter movement. Dayton said that a black man who was killed the previous night by police would be alive if he were white. An officer in a suburb of St. Paul had shot Philando Castile, a thirty-two-year-old school-cafeteria worker, killing him during a routine traffic stop. “Would this have happened if those passengers, the driver and the passengers, were white? I don’t think it would have,” Dayton said at a press conference. “I’m forced to confront, and I think all of us in Minnesota are forced to confront, that this kind of racism exists and that it’s incumbent upon all of us to vow that we’re going to do whatever we can to see that it doesn’t happen, doesn’t continue to happen.”

The governor’s statement gave hope to black political leaders and local activists that their decades-old experiences of systemic racism had finally penetrated the state’s largely white upper echelons of political power. Castile’s death prompted the first widespread calls in modern Minnesotan history for the state legislature to pass wide-ranging policing reforms. The state’s handful of black lawmakers—a total of three in the State House and Senate at the time—began leading conversations in the legislature about the need for significant changes in local law enforcement. Four months later, in November, 2016, the effort foundered after Republicans, bolstered by Donald Trump’s candidacy for President, reclaimed control of the State Senate and expanded their House majority. Downplaying the need to reform police, Republicans introduced legislation to crack down on Black Lives Matter demonstrations, including allowing cities to sue protesters to recover the costs of policing their demonstrations.

Four years later, the state finds itself in a painful and familiar place. On Memorial Day, the police killing of George Floyd, like that of Castile, was captured on video and posted online. Floyd’s murder touched off the largest mass demonstrations against police brutality and systemic racism in the United States in a quarter century. More than ten thousand demonstrators have been arrested in dozens of cities.

The turmoil in Minneapolis challenges the myth of Minnesotan exceptionalism, the widely held belief that the state’s innovative spirit and progressive policies have created a shining example for how other states should run. The Twin Cities region has long been described as a paradox. Minneapolis-St. Paul and its surrounding suburbs are home to more than 3.4 million people and one of the wealthiest metropolitan areas in the country, with good schools, verdant parks, well-paying jobs, and a low cost of living that all, theoretically, add up to a high quality of life. But academics, political leaders of color, and activists say this has primarily been true only for white Minnesotans. The state remains one of the least diverse in the country, and the Twin Cities metropolitan area has grown more racially segregated since the turn of the twenty-first century, despite a history of welcoming refugees and immigrants from East Africa, Vietnam, and Central America.

Off and on for the last decade, I’ve worked as a journalist in Minnesota, first as an intern for the St. Paul Pioneer Press during summer of 2010, before my senior year in college. For two months, I lived on the West Bank of the University of Minnesota campus, blocks from Cedar-Riverside, a largely Somali-American neighborhood. After growing up in Las Vegas, Nevada, one of the country’s most diverse cities, and graduating from the University of Nevada, Reno, in 2011, I reported for three years in Los Angeles, mostly covering business and the California economy for the Los Angeles Times. Eager to return to Minnesota, I took a job with the Star Tribune to cover state politics and government in 2014. The wide range of cultures represented here, as well as the beautiful summers, attracted me. I was sold on the promise of Minnesota.

But the longer I’ve lived here the more glaring the state’s racial blind spots have become, even among the most progressive-minded white Minnesotans. As many transplants learn, Minnesotans are tough to befriend. If you’re a person of color who grew up in less white environments, you might suddenly notice your race affecting how others treat you. During a press conference in 2015, a former State Senate majority leader responded to a question I posed by asking, “How long have you been here?” Capitol dwellers told me that I didn’t “look like a political reporter.” Once, a person seemingly lost in the complex mistook me for a janitor as I left work late one night and walked to my car. The moment caught me so off guard I barely had a chance to fully register what about my appearance—other than my skin tone—would have prompted it. The regularity of moments like these, some obviously racially rooted, others less so, made the Capitol’s gilded and marbled corridors feel like an uninviting and intimidating place to be a person of color.

Nonetheless, I endeavored to shed light on the experience of nonwhite Minnesotans through political reporting. I explored the various ways in which people of color, particularly black Minnesotans, have been historically excluded from the levers of power in state politics and government. Candidates of color, even those running as Democrats, face institutional hurdles from a political structure that favors white incumbents, for reasons ranging from lack of access to donors to the threat of political ostracism if they run against Party-endorsed candidates.

The demographic changes that have already occurred in other parts of the country arrived only recently in Minnesota. In 1990, Minnesota was ninety-four per cent white; three decades later, whites make up eighty-four per cent of the population. Even as people of color have arrived, they have failed to acquire political power commensurate to their numbers. Last year, the Minnesota legislature swore in its most diverse body ever. Yet lawmakers of color hold only twenty-one of the two hundred and one seats. All together, they could fit in a high-school classroom. Ninety per cent of the members of the legislature remain white. In recent years, the relationship between communities of color and the state’s largely white media have deteriorated, too. On January 22nd, black activists on a citizen advisory committee tried to bar journalists from covering a public meeting, citing the historical representation of their communities in the state’s media. The episode subsided after city leaders said that they would urge members of the advisory body that they should follow the requirements of the state’s public-meeting law.

Since the nineteen-sixties, black residents have been demanding a wide-ranging overhaul of law-enforcement agencies, including community policing, civilian oversight, improved training, and stronger accountability. Instead, policies enacted by G.O.P. governors and lawmakers have exacerbated mistrust of the police. In 1999, Rich Stanek, a former Minneapolis police captain and State House Republican, led a successful effort to revoke a law requiring Minneapolis and St. Paul police officers to live in the cities in which they worked. Nearly twenty years later, in 2015, about twenty-two per cent of St. Paul police officers called the capital city home, and, this year, roughly seven per cent of Minneapolis officers live in the city; many commute from largely white suburbs, such as Anoka, and exurbs, like the neighboring city of Hudson, Wisconsin.

When Democrats last took full control of the Minnesota government, in 2013, they enacted a series of progressive milestones, including the legalization of same-sex marriage, the passage of a tax on the wealthy, and the boosting of the minimum wage with future increases tied to inflation. Still, ambitious reforms championed by legislators of colors, ranging from policing to education, struggled to gain broad support—no major police reforms were enacted. Joe Soss, a University of Minnesota professor who studies poverty and racial inequality, said that progressive policies championed by Democrats failed to address bias. “What you had were generous policies that helped white people buy homes, help protect white people, invest in white communities, and lifted them up higher than people who were left out,” Soss told me. “When it comes to power in the state and in the Twin Cities, people of color have continued to be very marginalized.”