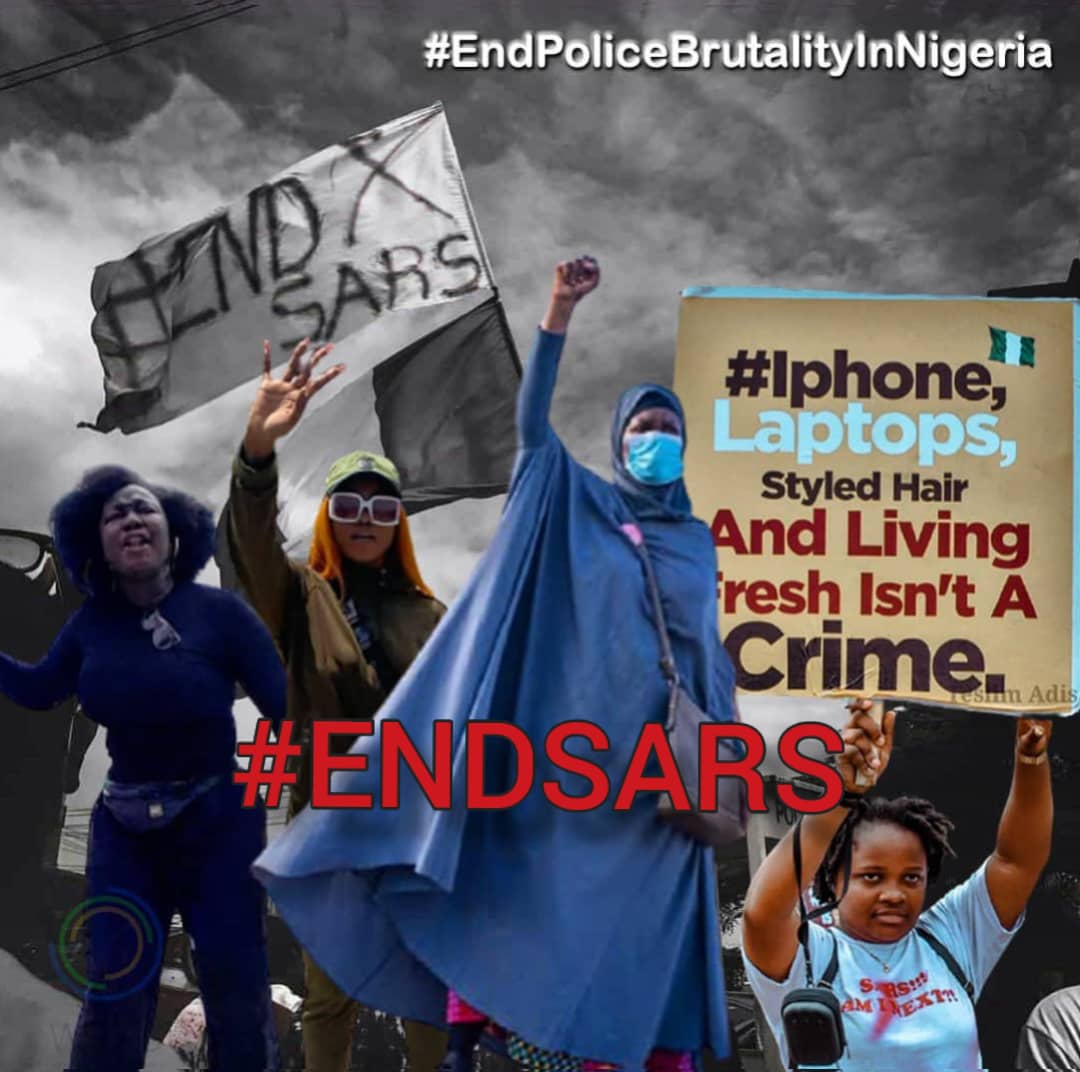 Starting on the 8th of October, peaceful protests broke out across Nigeria and expatriate Nigerian communities around the world, all clamouring for the scrapping of the Special Anti-Robbery Squad (SARS). This unit of the Nigerian Police Force was set up in 1992 and was originally tasked with fighting robberies, kidnappings, and violent crime. In recent years, however, the division has fallen foul to corruption, drawing nationwide rage for illegal arrests, brutalisation, extortion of young people, and extrajudicial killings.

The peaceful movements tagged #ENDSARS started on Twitter and has been said to be the biggest social movement in the country, cutting across ethnic sects, social class, and gender. At the forefront of this campaign were Nigerian women, who have led fundraising campaigns and organised to initiate and prolong rallies, as well as helped to provide legal representation for those arrested at protests in the country.

Aisha Yesufu at a protest ground in Abuja

Aisha Yesufu, a feminist in Nigeria, was at the forefront of the campaigns in Abuja. She had repeatedly called for the Federal Government to adequately address its citizens’ calls for total disbandment of the offending police unit and critical action to address police brutality. It is not Aisha’s first time lobbying. The 46-year-old Muslim woman was the co-convener of the #BringBackOurGirls movement. Along with Dr Oby Ezekwesili, she led a march in the rains of the 30th of April, 2014 to the National Assembly to demand the rescue of schoolgirls kidnapped by Boko Haram, a terrorist organisation.

Avoiding a centralisation of power was a strategy adopted by the dissidents, which enabled the varied voices of the Nigerian youth to take charge.

For instance, people deferred from naming representatives of the movement, instead, calling out the government to speak directly to the public and accept their demands. Aisha Yesufu, outspoken and articulate, addressed Nigerian leaders in a series of tweets, saying “How can you business leaders only think about yourselves? If you want the protest to end, then do the right thing natural business leaders do in other countries, openly tell the President that he has failed young protesters in the streets.” Aisha Yesufu was beaten by police officers and had her car tyres slashed for being visible at the Abuja demonstration grounds.

After days of continued protests, the Inspector General of Police – Muhammad Adamu – announced that the SARS unit will be disbanded. The Nation’s President, Muhammadu Buhari reiterated this promise on the 12th of October. Yet, while these were being televised, police officers were on the streets of Abuja, Lagos, Ogbomosho and elsewhere, shooting at the demonstrators and spraying teargas. They were also apprehending and detaining them. Rising to the occasion, Feyikemi Abudu – a podcaster and Twitter influencer – got involved with securing the release of activists illegally taken into custody. The coverage of this on Twitter generated even more attention to the crisis, providing the basis to create a response helpline with a dedicated team of volunteers. The group helped in organising security, ambulances, and legal aid across the states where the rallies were being held.

Feyikemi Abudu and Jola Ayeye co-host a podcast called ‘I Said What I Said’ and have been speaking out against SARS brutality on their podcast since 2017. Today, they remain instrumental in creating a support system for protesters, responding to requests for medical and legal help 24/7. They’ve also disbursed funds to individuals to coordinate nationwide rallies.

Providing a united front of juridical protection, Moe Odele – an international attorney – has been compiling, organising, and deploying volunteer lawyers to provide legal counsel for those detained all over the six geopolitical zones in Nigeria. She has worked with over 100 lawyers across the country to personally oversee their training before placement. This network of lawyers has facilitated the release of over 80 campaigners across the country.

Another group of Nigerian feminists have also taken up the task of sustaining the movement. Aptly termed the Feminist Coalition, activists such as Jola Ayeye, Odun Eweniyi, Kiki Mordi, along with many others, have banded together to establish political presence and crowdfund. The money raised is now being disbursed across the country to fund the protests. Organisation spending is coordinated and made available to Nigerians in real-time by Odun Eweniyi; she is the co-founder of Piggyvest, a fintech start-up in Nigeria. The support of the feminist coalition has been unrivalled. It has been recognised as one of the major faces of the protest, with many people using their logo as display pictures across major social media platforms.

The course of the #ENDSARS protests changed on the 20th of October, after the massacre at the Lekki toll gate in Lagos. DJ Switch, a woman at the frontlines of the demonstrations, live-streamed the events that evening as the Nigerian army savagely shot into hordes of protesters at the scene. This documentation by DJ Switch, officially known as Obianuju Catherine Udeh, proved to be the only viable form of exposing the reality of civilian life in the country, in a sea of corruption. Captured amongst the chaos are the ironic scenes of people dying and scrambling for safety while waving the Nigerian flags and mouthing the Nigerian anthem. The spectacle has amassed over 150,000 views. The nation has been thrown into deep mourning following this debacle. Nigerian authorities have since rubbed further salt into the wound, by adamantly denying any foul play, claiming that the live video was doctored.

Across all fronts and in various scales, feminists have been showing up. In an article for Al Jazeera, different women talked about how they have been contributing to the resistance. In a country where feminists are often rebuked, referred to as ‘cultists’ and ‘witches’, this is a wake-up call and exemplary action to witness. A new dawn is being established, as the government reels from the pressure and desperately tries to cover its tracks. Nigerians are re-strategising for long-term policy changes, expatriate communities are still marching in their various countries as we speak, and there are hopes that this movement will yield positive returns.

Written By: Mariam Adetona – a freelance writer in Oyo state, Nigeria. She tweets at @Amamayoyo and can be contacted at trailblazer020@gmail.com