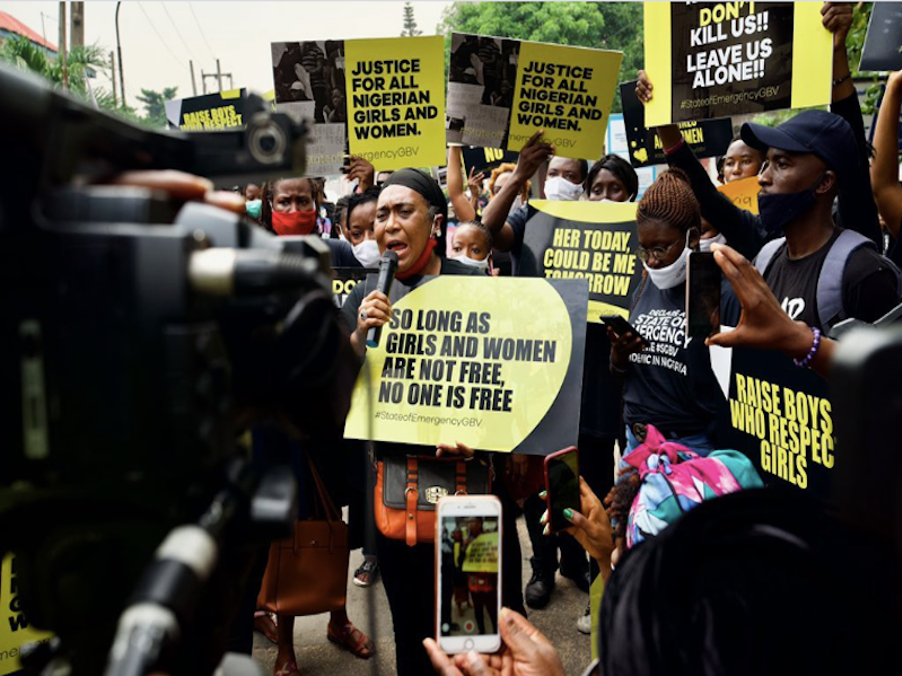 Over the past few months, Nigeria has seen brutal and horrific instances of sexual violence. These events have prompted huge outpourings of grass-roots activism, social media discourse, and state-wide demonstrations demanding #JusticeforUwa and #JusticeforBarakat among other victims. Amnesty International even used their platform to elevate the cause.

Gender-based violence (GBV) is a global issue. Countries all over the world have a long way to go in advocating for the rights of women and adequate punishment of crimes. Nigeria’s women, in particular, face significant barriers to access justice for GBV. These obstacles are the combined effect of social and cultural norms, which prioritise male entitlement, as well as a patriarchal legal system.

On June 11th, all thirty-six Nigerian governors declared a state of emergency on rape and gender-based violence in the country. Titilola Vivour-Adeniyi, a legal expert and activist, working in Lagos State, noted that the declaration was ‘a good step in the right direction’. However, she believes that ‘the responsibility rests on state governments and the federal government to put laws in place that protect women from gender-based harm’.

There are a number of laws aimed at preventing and punishing crimes against women. Nevertheless, one legal hurdle for justice is the outdated viewpoint that GBV crimes are interpersonal conflicts where both sides have to take steps to modify their behaviour. Another critical challenge is the high cost of prosecution, which means that only the wealthiest of victims have the means to seek equity.

The Violence Against Persons Prohibition Act (2015) orders that victims of sexual violence receive necessary treatment and rehabilitation through NGOs or governmental agencies, such as Lagos State Domestic and Sexual Violence Response Team (DSVRT). Ideally, the government would also provide rape kits and forensic infrastructure to state hospitals. These kits would provide essential data to cases where the perpetrator is unknown.

In reality, victims often receive inadequate support from the government due to weak healthcare facilities and corruption. For instance, victims may receive help at a centre that collects forensic evidence and provides counselling, but may then go to a police station where bribes are demanded for cases to be actually filed. This is the crisis; the cost and stress of prosecution means that most offenders go unpunished.

I spoke to Dr. Fatima Waziri Azi, an academic, attorney and the founder of an NGO for victims of domestic violence in Nigeria. In my interview she said: “It is my hope that we have improved prosecution of GBV cases, improved access to justice for survivors, enhanced coordination and response times amongst response agencies; and a nation-state where women and girls feel safe and protected rather than being endangered.”

She stressed the issue of the lack of police training on GBV issues, stating that “Police are in most cases first responders to violence against women…they need to be trained consistently across the board on responding to violence against women, investigation and prosecution.” She also highlighted the importance of the VAPP Act being amended to criminalise stigmatisation, victim-blaming and shaming, to incentivise justice for women.

It was also recently reported that policemen arrested and raped over ten women who were at a nightclub in Abuja, the capital. The very people meant to defend human rights are overturning them. These structural failings create an abuser’s paradise where criminals feel emboldened to prey on women. This needs to end.

Socially, rape culture is prominent in Nigeria, a patriarchal society where it is preferred that women are seen, not heard. Men largely believe that the role of women is limited to the domestic sphere; raising children and fulfilling men’s needs. Various structures of society, such as the family, educational institutions and workplaces, emphasise the control of female behaviour. Female voices are often silenced in private and in public.

Rape culture in Nigeria is complex, but a key facet of it is victim blaming. That is to say, the criminal act of rape is rationalised by the perceived shortcomings of the victim, such as appearance or actions determined as risky.

The harmful language of victim blaming also appears in political spaces. A lawmaker recently claimed that women should dress decently to avoid rape, “because men are not wood”.

Unfortunately, Nigeria has many rape apologists and rapists in positions of power.

In private and public spaces, this patriarchal culture frees men of moral responsibility and instead places harsh moral judgement on women. What’s more is that putting moral shame on victims creates a culture of silence that emboldens the perpetrators of these horrific crimes.

There is a culture of double standards where heterosexual women are expected to tolerate bad behaviour in relationships, yet men are not. Female suffering is considered the natural order of things. But this should not be the case, and it must change.

Additionally, the cultural emphasis on marriage as a woman’s greatest life achievement contributes to the normalisation of domestic abuse. Women struggle to leave abusive situations due to fear of the stigma that comes with being an unmarried woman.

Religion also contributes to abuse against women, especially because religious leaders are usually men. For instance, many male Christians will quote bible verses that speak of female submission to men within marriage, to justify domestic violence and marital rape.

Moreover, the BBC ‘Sex for Grades’ documentary exposed a UNILAG senior lecturer who used his title as a pastor to gain the trust of his victims. He bribed young women with money and grades in exchange for sexual favours. This heinous abuse of power indicates the toxic way that male religious leaders perpetuate rape culture.

Generally, gender biases built into Nigeria’s laws and social norms make Nigeria an oppressive place for women. The justice system must criminalise all forms of gender-based violence, and toxic social attitudes must be unlearned. Rape culture works in favour of the rapist, as it places the majority of the blame on victims and disregarding their trauma. Once Nigeria shames and punishes abusers, instead of victims, we will be able to move forward as a society.

Here are some relevant resources related to gender-based violence in a Nigerian context:

A shelter for survivors of domestic abuse with legal advice and counselling services. Based in Abuja, Nigeria

Written by: Funmi Lijadu, a Nigerian-based collage artist and writer. In her work, she enjoys exploring her identity as well as wider socio-political issues she observes in the spaces she’s in.