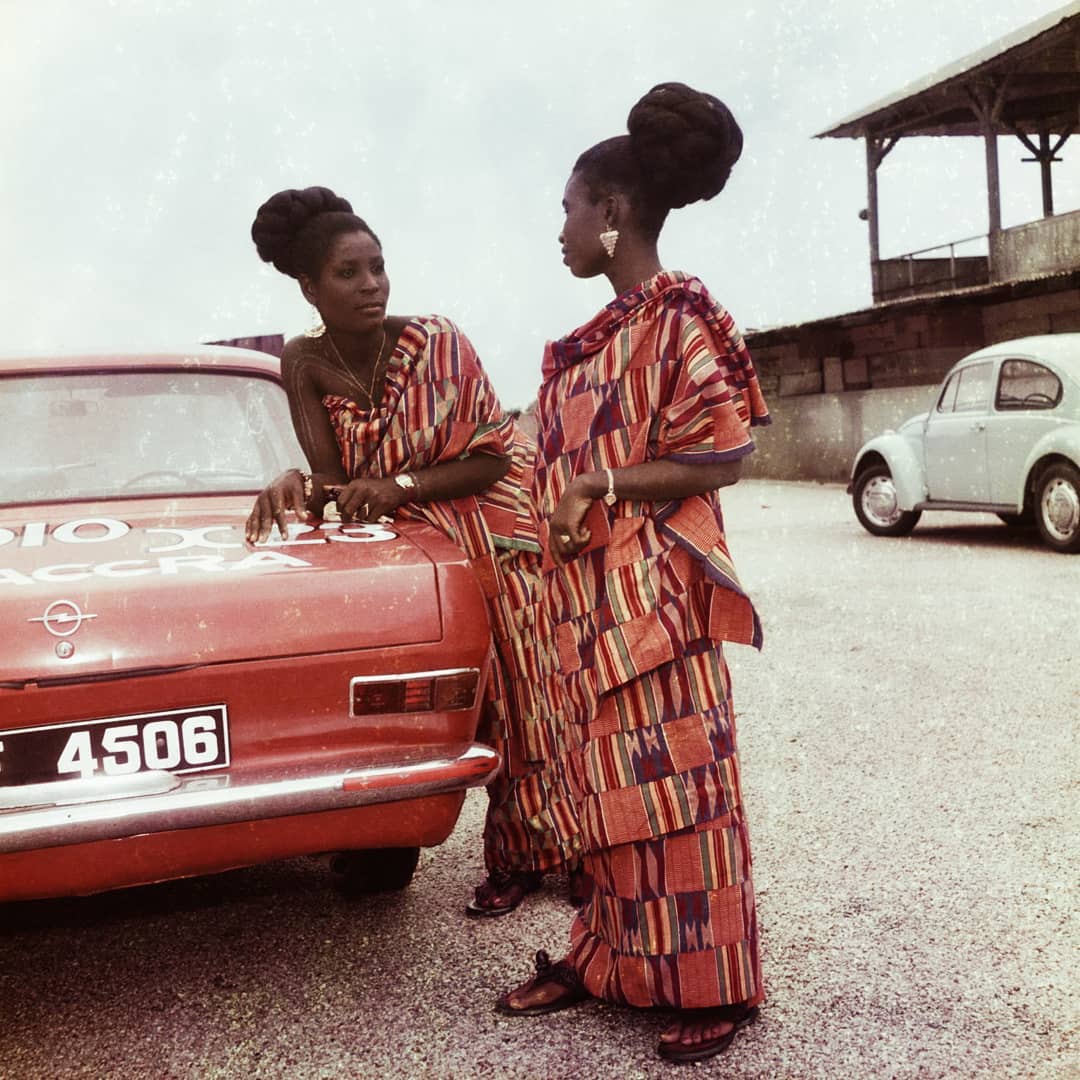 Born in 1929 in Accra, James Barnor is considered a pioneer of Ghanaian photography.

His career spans six decades and covers a remarkable period in history, bridging continents and photographic genres to create transatlantic narratives marked by his passionate interest in people and culture. Through portraiture, James’ photographs represent societies in transition: Ghana moving towards its independence and London becoming a cosmopolitan, multicultural metropolis.

To celebrate his 91st birthday, we’re making Autograph’s James Barnor: Ever Young exhibition newspaper a free download. Get it here.

This was published in a limited edition of 3000 copies back in 2010 to accompany the photographer’s first major gallery exhibition held at Autograph, and has been out of print since. Alongside reproductions of more than 60 of James’ photographs, the newspaper includes the brilliant essay People Get Ready: James Barnor’s Route Map of Afro-Modernity by Kobena Mercer.

The exhibition was the first major gallery exhibition of his work, showcasing more than 100 large-scale modern prints and vintage photographs – the majority not shown before. It followed a smaller preview exhibition at Harvard University’s Du Bois Institute (now the Hutchins Center) earlier that year, and the show has since toured extensively: from South Africa’s National Gallery in Cape Town (2011); to Impressions Gallery in Bradford, UK (2013); Theaster Gates’ Stony Island Arts Bank in Chicago, USA (2016); and most recently seen at Casa Africa in the Gran Canary Islands, Spain and select works included in the FotoFest 2020 biennale African Cosmologies in Houston, Texas, USA (unfortunately postponed due to Covid-19).

Now widely recognised as a major figure in contemporary African photography – and soon to be celebrated with a new exhibition at the Serpentine Galleries in 2021 – James’ career covers a remarkable period in history, bridging continents and photographic genres to create a fascinating compendium of transatlantic visual narratives marked by his passionate interest in people and cultures. Through the medium of portraiture, his photographs brilliantly document societies in transition: Ghana moving towards its independence in the 1950s and London becoming a cosmopolitan, multicultural metropolis in the 1960s.

In the early 1950s, James’ photographic studio Ever Young in Jamestown, Accra was visited by civil servants and dignitaries, performance artists and newly-weds. During this period, he captured intimate moments of luminaries and key political figures such as Ghana’s first Prime Minister Kwame Nkrumah as he pushed for pan-African unity. In 1960s London, he photographed Muhammad Ali training for a fight at Earl’s Court, BBC Africa Service reporter Mike Eghan on the steps of Eros at Piccadilly Circus, arms outstretched, and a multinational cohort of fashionable black women, posing in psychedelic frocks and fancy cars for Drum magazine covers.

His trajectory as a photographer is unique: both here and there, having left the continent to pursue a professional career in Europe when he was in his late thirties, he transgressed from the confines of classic West African mid-century black and white studio portraiture with elaborately painted sceneries to strikingly modern street fashion portraits in glorious colour, with the metropolis itself now serving as backdrop – many commissioned for pioneering South African lifestyle politics magazine Drum during the swinging 60s in London, to be distributed across the African continent. Later, upon his return to Ghana in the early 1970s, James – now fully versed in the art and technique of colour photography – established one of the first colour processing laboratories in Accra, intimately tying the ‘journey’ of the medium to his own nomadic biographical movements and cross-cultural exchanges. A true pioneer, and ever young at 91.

Over the past decade, Autograph has placed many of his now iconic works in major public and private photography collections to ensure the lasting legacy of James’ crucial contributions to the cultural history of photography, including Tate Britain, Victoria & Albert Museum and the UK Government Art Collection, to name but a few.

And in 2015, we partnered with Clémentine de la Féronnière gallery in Paris to co-publish James’ first monograph Ever Young, preserving the exhibition’s curatorial narrative in print. In my essay for the book, I reflected on the quietly revolutionary and transgressive spirit at the core of James’ practice – marked by a refusal to be held back or confined by a plethora of boundaries, expectations and burdens historically placed upon black practitioners in particular. The text begins as follows:

“’In the world through which I travel, I am endlessly creating myself’, the revolutionary psychiatrist, philosopher and writer Frantz Fanon famously wrote in 1952. A contemporary of James Barnor, Fanon’s Caribbean ode to self-invention is one that finds a compelling resonance and beguiling echoes in Barnor’s remarkable African journey and unconventional destiny. Although not immediately apparent, underneath the surface lies something intrinsically revolutionary, something inherently transient in the evolution of Barnor’s multifaceted practice: something quietly rebellious, surprising and wonderfully ‘different’.”

“This ‘something’ is reflected in Barnor’s images of yoga practitioners, ballroom dancers and black-and-white minstrel performers in drag, and also manifests palpably in those intimate moments with key architects of the independence movement – all in colonial and newly post-colonial Accra. And within the space of a decade, a uniformed civil servant synonymous of a new generation of professional Ghanaian women will exist beside a black Barbarella in intergalactic silver go-go boots, pink mini and fantasy wig; locked in a salute, one gazes respectfully outside the frame – towards progress? – while the other playfully engages the camera through her oppositional gaze: in other words, the emancipated respectability, industriousness and upward mobility of a female police academy graduate will ‘encounter’ the sexual politics of Drum magazine in a Jamaican bus conductor-turned-amateur-fashion model in that extraordinarily Fanonian flow that will become the hallmark of Barnor’s practice.”

Ten years on, we are immensely proud to have helped open up this continuous process of recognition, enabling James’ work to be rediscovered again and again by institutions and individuals globally, all of us collectively contributing to the well-deserved appreciation for this extraordinary nonagenarian photographer whose generosity of spirit, undying curiosity, and sheer joie de vivre is as infectious now as it was then, when we first met more than a decade ago.

Essay excerpt from: Renée Mussai, Ever Young, Never Sleep – An Introduction In Fragments, 2015, read it in the James Barnor: Ever Young book

In depth: read the full story of Autograph’s work with James Barnor in Riason Naidoo’s interview with Renée Mussai