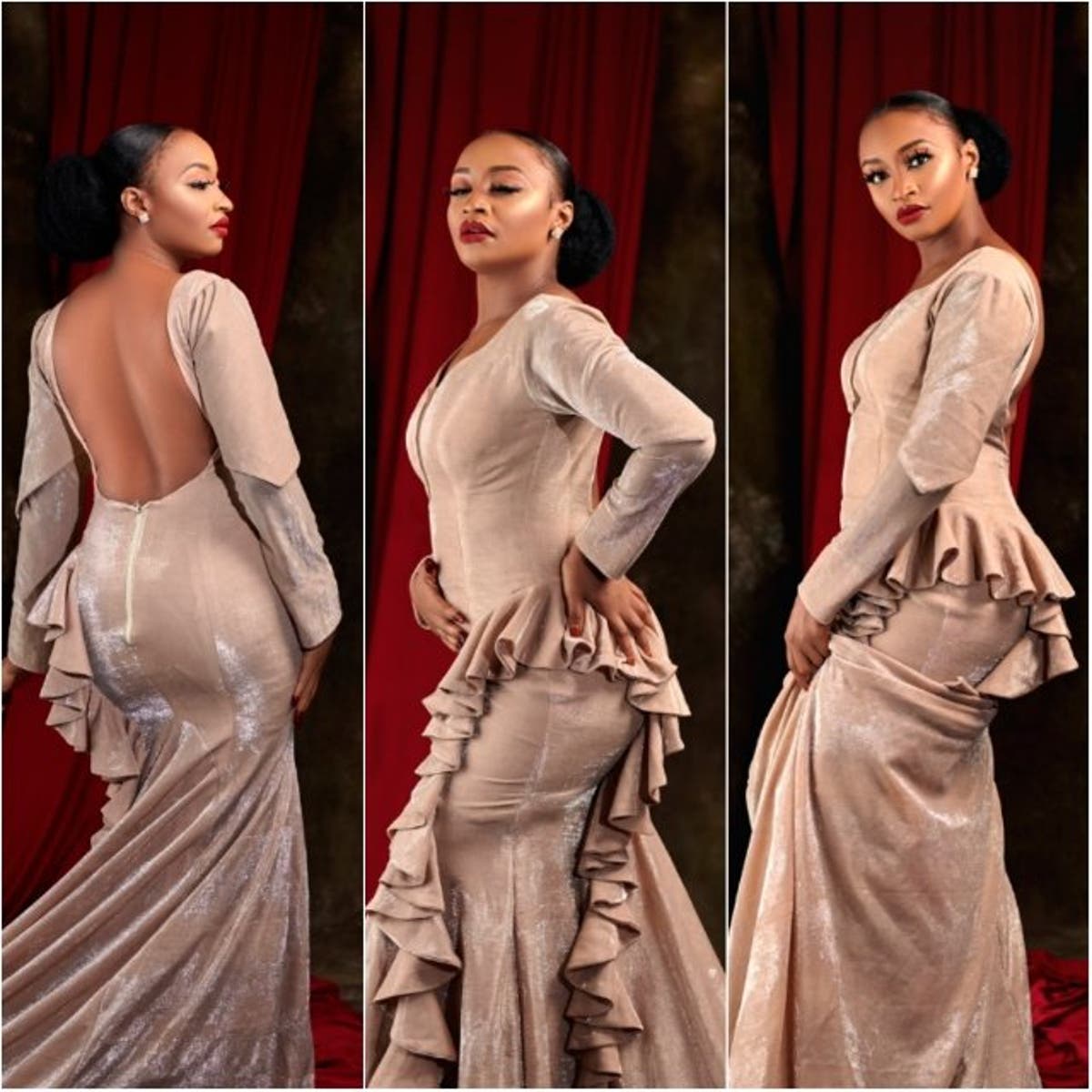 Controversy swarmed the Kannywood (Hausa language film industry) actress, Rahama Sadau, on 1st November, after she posted photos of herself wearing a backless dress on her social media. Captioned ‘regal’, the pictures of the Muslim Nigerian starlet were met with reactions considering them anything but. Many Twitter users from northern Nigeria (Arewa), which has a distinctly more conservative culture than the southern region of the country, claimed her outfit was provocative and in poor taste for a female Muslim. One tweet, for instance, referred to the backless, floor-length gown as the ‘devil’s dress’. Another described Sadau as ‘immoral and indecent’.

In light of the backlash, not only did the 26-year-old delete the pictures, she released an apology video on her Instagram, on 3rd November. Pleading in remorse, make-up-less and in a chador, her solemn demeanour stood a far cry away from her typically glammed up and unperturbed self. Her use of Hausa to deliver her message stood in further contrast to the sea of English language posts on her page.

The post felt like a performance of modesty, traditionalism and piety, rather than her true self, as this is not the first time she’s been caught in controversy regarding gendered cultural and religious expectations.

Indeed, in October of 2016, Sadau also faced backlash from her community, after featuring as the love interest in a music video by the pop star, Classiq. Muhammadu Kabiru Maikaba, the chairman of the Motion Pictures Practitioners Association of Nigeria (MAPPAN), which governs Kannywood, branded her behaviour as ‘wayward’, with others also calling it ‘immoral’. Maikaba went on to confirm that Sadau had received an industry-wide ban as a result of her actions, in an interview with BBC Hausa service.

Kano governor, Abdullahi Ganduje, reversed her expulsion in January of 2018, after Sadau formally apologised. However, the young actress has since been blacklisted again following the latest, aforementioned, incident. 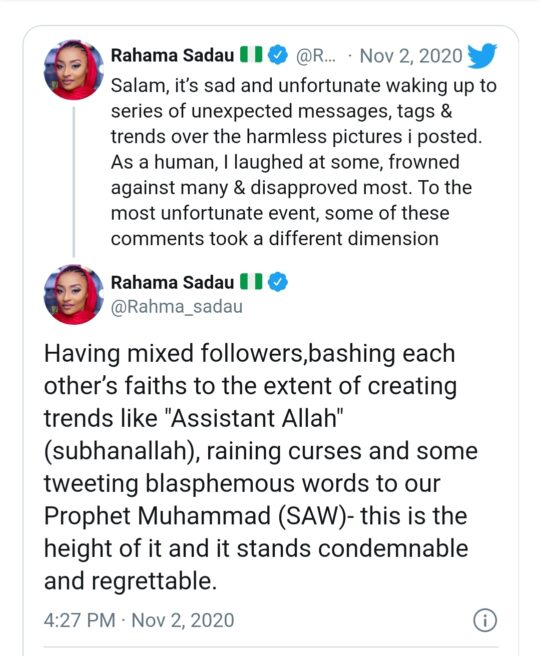 But the similarities between these two episodes don’t stop here, and they speak to a wider culture of misogyny within the Hausa-language film industry and the ethos it represents. Back in July of 2017, for instance, Sadau denied having received an expulsion letter from MOPPAN. This seems like a highly contradictory claim, given that she wrote an apology letter to the organisation, as well as the state government and Kano Emirate Council, just a year later. The discrepancy calls into question the validity of her most recent negation of action being taken against her, regarding a blasphemy case.

Following Sadau uploading the supposedly ‘provocative’ photos, several ‘blasphemous’ comments were allegedly made against the Prophet Mohammad. We do not know what the comments specifically were, but as the inspiration for the irreverence – according to institutions at work against her – Sadau is the one being held culpable of blasphemy. According to Sharia law, which operates in the Muslim-majority states in Nigeria, blasphemy is punishable by death.

This would be an alarming predicament, if true, serving to highlight the violence faced by women in the region, on a structural level. Although the actress has denied being embroiled in such an affair, her track record of transparency, coupled with the previous executions of several women on the grounds of promiscuity, across the northern states, makes this same fate for Sadau a terrifying possibility.

Moreover, a letter of complaint, to the Inspector-General of Police (IGP), Mohammed Adamu, along with a subsequent mandate of police action regarding the matter, confirms that some form of bureaucratic investigation is underway. Written by a man named Mal Lawal Moh’d Gusau, and dated 3rd November 2020, the petition reads:

“Sir, I am writing to inform you that Rahama Sadau a Kannywood actress through her controversial picture has angered many people and if not quickly looked into could degenerate into a serious crisis,”

Responding to this request, Adamu issued a letter to the Kaduna State police commissioner, stating:

“I am to convey the directive of the inspector general of police that you treat proactively with a view to ensuring the development does not result to any act that could threaten public peace and security.”

The letter was signed off by Idowu Ohowunwa, a commissioner of police and principal staff officer to the IG.

Whether or not these circumstances will become more serious is unclear to say, but what can be revealed is that Sadau, like many other women in the area, is facing systemised and gendered suppression. 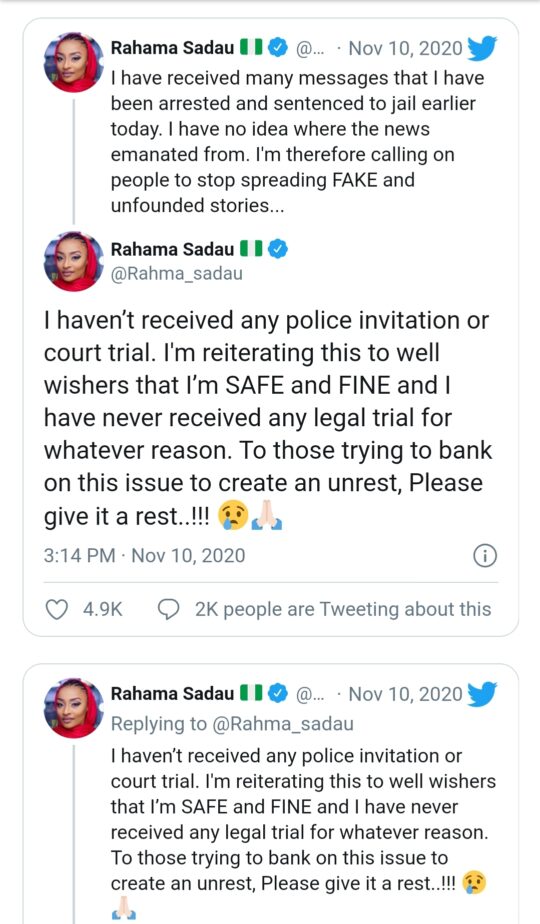 Along with the two earlier mentioned expulsions, Sadau was also given a 6-month ban back in March of 2015, at the age of just 21. Her crime? Reporting sexual harassment. In a, now deleted, Instagram post, Sadau took to the platform to accuse director, Adam Zango, of firing her from his film Duniya Makaranta, after she rejected his sexual advances. Zango is eight years her senior and was also operating from a position of power when the young woman claimed to have been inappropriately propositioned.

And this is not just a targeted attack on Sadau. Fellow Kannywood starlet, Nafisa Abdullahi, also received a two-year suspension from the Arewa Film Makers Association (AFMAN), for hosting a party, with two (female) friends. The activity, reportedly, violated the association’s code of conduct.

For both women, their primary source of income was impeded for the sake of preserving an idealised and unrealistic image of virtue. Furthermore, it seems as though this type of blackballing is almost exclusively reserved for women who step out of line, with little social or economic consequence for the men who are just as culpable, if not more so. While it’s important to note that in neither the case in 2015 nor the one in 2016 the men involved were formally affiliated with any Kannywood organisations, it does not negate the environment of tyranny and objectification which encapsulates the field.

To evidence this further, we can look to the incident that took place involving Kannywood actor, Yakubu Mohammed. Following the September 2020 release of the film Fatal Arrogance, Mohammed expressed regret for starring in media which depicted Islamic activists (members of the Islamic Movement of Nigeria – IMN, to be exact), as ‘terrorists’. Although he has requested that the producers delete his scenes, and also offered compensation for any damages incurred as a result, it is more than outrageous to see that the actor has not received criticism from any organisations in the Hausa-language film industry. This is despite also being a ‘representative’ of the Islamic culture. The sexism is glaringly obvious.

It’s concerning that women must navigate harassment, hyper-surveillance and even threats of violence, as a result of an institution entrenched in misogyny. The industry, and broader northern region, needs new leadership which reflects a less oppressive attitude towards female self-expression if it’s to avoid a brain drain of female talent to the south of the country, and abroad.

Written By: Hannah – an award-winning writer who is passionate about discussions centring black women and the nuances within this identity. Connect with her on Instagram and on her blog.