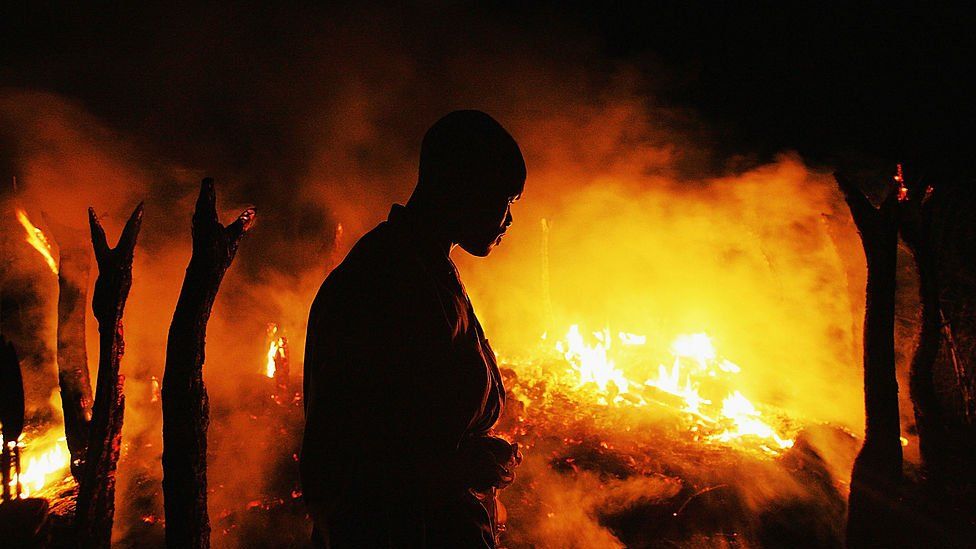 Meeting of Minds UK presents Stolen, a four-part series detailing a young girl’s tragic tale of loss and self-discovery after she and her brother are kidnapped by rebel forces.

The intruder kept his grip tight around my neck until I faded into a semi-conscious state. He grabbed me around the waist and hoisted me over his shoulder before I could fall to the floor. My mind was fraught with grief, my body battered and bruised. I could not comprehend the events which had unfolded over the last few minutes. Through slitted eyes, I glimpsed the remnants of what was once a home filled with love. My vision swam with tears, and there was severe pain in my throat from the trauma of being strangled. The scent of blood was so strong that I could taste it in my mouth. I wanted to call out for Mama, but I found that I could not speak. I knew deep down that she could not have survived this final attack, but for some reason I held onto hope, still praying that somehow her life would be spared.

The other men began splashing the interior of our hut with the liquid from a metal canister. The pungent odour of kerosene permeated the air as one of them poured some more of the liquid on the bed upon which Mama lay. The man who had convinced Adebiyi to pull the trigger and take our mother’s life now reclaimed his rifle from my brother’s hands. He reached into his pocket, handed Adebiyi a box of matches and proceeded towards the front door.

“Quickly now, Son. We have a long journey ahead of us still”, he stated calmly while stepping outside. As I was carried out of the hut and into the night, I bore witness to the tragedy that had befallen our small village. All of the homes in our community were ablaze, filling the air with a putrid smoke that betrayed what lay inside of them. Cries pierced the night from inside of some of the huts, anguished howls that did not sound human. I watched as our own hut became slowly engulfed in fire, flames devouring the framework and licking at the walls hungrily. My captor dropped me to the dusty earth, and a small whimper escaped from my lips as the air was knocked out of me.

The intruders forcefully gathered their captives into a large group close to our communal garden. The few brave villagers who tried to escape were beaten into submission and dragged into the clearing. By this time, I had struggled to sit upright on the cold, dirty ground, my body aching from the injuries I sustained. Blood from my head wound still dripped steadily, and I was beginning to feel dizzy and weak. I looked around me and noticed that none of the adults from our village were present. I wondered if they had met the same fate as Mama and could not stop the hot tears from running down my cheeks. Now, the intruders looked down upon us with their weapons trained on our bodies. I thought to myself that this must surely be the end. I was about to die in this field like an animal, my blood draining out of my body and seeping into the earth.

A tall man stepped forward from the posse of intruders. He seemed to be the oldest one among them. Wearing faded camouflage pants and a black shirt, with a fedora perched cheekily atop his head, he oozed confidence and ego.

“Sons and Daughters! Congratulations on making it this far! I am your Commander! You all will join us now and take up your rank in our esteemed army. I will shape you into the men and women that Africa deserves. I will train you on how to defeat the enemy, how to rid this land of the disease which has plagued us for far too long. With me, you will learn how to be strong! Do not be afraid, my children. THE KING’S RESISTANCE ARMY KNOWS NO FEAR!!”

He then motioned to his soldiers, who advanced towards our group and forced us to line up.

“Receive this gift of courage now, my children, and feel the strength of a thousand African Gods coursing through your very soul. Complete the transformation now and become who you are meant to be!”

We each received a small pill that we were instructed to swallow. I stared down at the tiny blue pill in the palm of my hand and then into the face of the soldier who was closest to me. His gun was pointed at my chest, but he slowly lifted it to my head as I hesitated. I put the pill inside of my mouth and swallowed. I could see the other captives near me following suit. I scanned the crowd for Adebiyi and found him at the Commander’s side. At that moment, he glanced in my direction, almost like he could feel me watching him. A chill ran down my spine as he looked me square in the eye and smiled. His white teeth gleamed in the darkness as he opened his mouth and put the pill inside.

My heart thudded in a slow cadence as I took in my surroundings. The screams from the huts had ceased, and now the night was eerily quiet except for the crackling of the many fires which burned around us.

“Now children, we must collect the produce from this lovely garden and continue on our journey. We need to get home before daybreak.” the Commander announced. We were provided with bags and, without argument, entered the garden and began stocking up. My body no longer ached with the ferocious intensity of moments earlier, and, amazingly, I felt a renewed sense of calm. I filled up my bag and joined the queue of captives who were already finished.

After the garden was fully harvested, we were ushered into a long line and led into the dense African jungle while our village burned to the ground behind us. I risked a glance back as I stepped into the thick brush that surrounded our homes. In my altered state of mind, I saw my mother stepping out of the flames which engulfed our childhood home. Her face was mangled and disfigured, her clothes falling away from her body in shreds. Swallowing a huge lump in my throat, I blinked back the tears, which threatened to fall again. Suddenly I heard Mama’s voice like she was whispering directly into my ear.