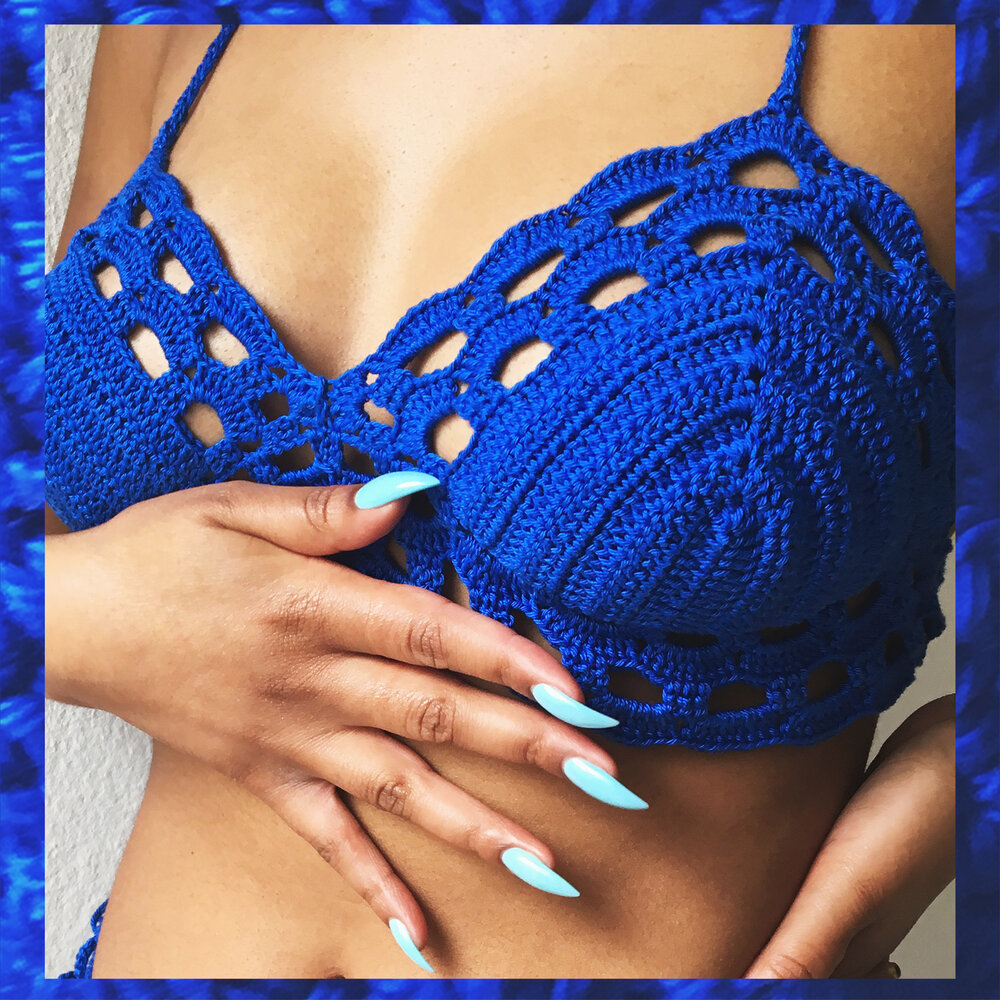 “It’s never been something that’s been accessible to me”.

Though it might sound like a person’s name, Luena is the Angolan city where Zita, the crochet artists behind the brand, Luena Crochet, was born. It was there Keshia had seen Zita crocheting again for the first time in almost 20 years. “I thought it was a top, and I thought it was very beautiful – it was not a top, it was a carpet – but I thought it was very beautiful,” Keshia tells me, “I came up with the idea of maybe making a top or a bikini, so she made a couple of bikini tops, and it was just so beautiful we wanted to share it with our friends and people in our community.”

The three co-founders, Zita, Keshia and Desi, have known each other for over 20 years, with Zita being almost like a mother to the other two. They first met within the Portuguese-speaking African community (PALOP) in Berlin, where the brand is based – Zita and Keshia are from Angola, and Desi is Bissau-Guinean. They call it a family business, and though Zita is the principal crochet artist, both Keshia and Desi have become masterful crocheters themselves, since Luena Crochet came to life.

Image: Keshia (centre back) and Desi (centre front) and some Luena crochet models / by Jagi Films

Keshia tells me that even though she had come up with the idea of making bikinis or tops for other people, “In the moment I couldn’t even really see myself in one. I couldn’t picture one in my size; it’s never been something that’s been accessible to me in mainstream stores and fashion.” Most stores stock only stock up to a D cup for their bras and bikinis, so for bustier people, their options are often to shop online or to settle for ill-fitting garments. Keshia adds that finding crochet items in mainstream stores is “fully out of the question.”

The underwear and bathing suit industry – the fashion industry generally – has made strides in their sizing ranges and representation with diversely-built models. Nonetheless, Keshia tells me that she has often had to drive out of Berlin to access the few stores that stock her cup size available. “Even then, I remember going to a bra store and there were only two bras that fit me. They weren’t nice, but I didn’t have a choice.”

She also tells me about how plus-sized and fuller-busted have often been collapsed into the same category, and though there is often overlap, it is not always the case. For that reason, it was important for Luena Crochet to be and remain inclusive in its sizing so that people of all cup and body sizes and types could have an item that they really enjoyed.

Before starting their first official line, the trio made sure to size a range of different people they would be able to adjust their items before their commercial launch. “Something we weren’t expecting at all was the sheer joy on people’s faces when they had something that fit perfectly to them. That’s what kept us going this whole time, and it’s the same feeling I felt when I wore my first crochet piece,” she tells me, “sharing that with other people has been really incredible, especially people that can’t find anything nice in a regular store.”

They ensure that the prices of their items do not increase with the cup size, “we considered that from the start, there’s no reason for people with higher cup sizes to pay more.” Keshia explains that the “standard” dimensions that they measure all their items from are larger than what would be considered standard or medium in mainstream fashion stores. Several global reports suggest that the bra sizes frequently stocked in-store are smaller than the average bra sizes in those countries – Luena Crochet aims to go against this curve.

Their crocheted tops range between £35 to £70, with pricing staying consistent across sizes, “people with smaller cup sizes would pay more than we would theoretically need for the material so that the price stays the same.” They also maintain that their items adjust to the people and not the other way around. “We want people to feel good and have things that they feel themselves in.”

When I ask why they chose English as their lingua-franca, other than the fact that English has a broader international reach, Keshia explains that Berlin’s multicultural nature means that many social movements and events are led in English. She says that it’s been one of the more challenging parts of promoting Luena Crochet’s vision to the German and Portuguese speaking world.

Despite this, the company is still committed to  promoting body diversity beyond the English-speaking world, especially given their culturally diverse origins.

They also offer support in German, Portuguese, French and Spanish, directly connecting with their consumers to establish the design, support, coverage, colours and threads required. Furthermore, they plan on translating and adding subtitles to their introduction and demonstration videos. Though this feat is not without its challenges, as they lament, “we are finding it difficult to repeat every single thing in all the different languages.”

Not forgetting their roots, many pieces in their collections pay homage to their national backgrounds. They are also acutely aware of how isolated PALOP countries are in their respective regions, and she stresses the importance of supporting one another as Luso-African small businesses. A big part of their ethos is to collaborate with companies that have a similar background. In 2020, they partnered with Minúcia, an Angolan shop that makes African glass bead accessories, to create exclusive pieces. “We’ve always had this big intention of supporting each other and growing together as a community,” Keshia tells me. They also plan – COVID allowing – to begin production in Angola and Guinea-Bissau to create job opportunities and facilitate access to their bikinis and tops in their home countries.

Through their clothes and language, Luena Crochet wants to make sure that everyone has the opportunity to look and feel their best in their flattering pieces. In 2020, they even launched a babywear line, Lueni Crochet, showing that inclusivity encompasses age as much as it does race and body image.