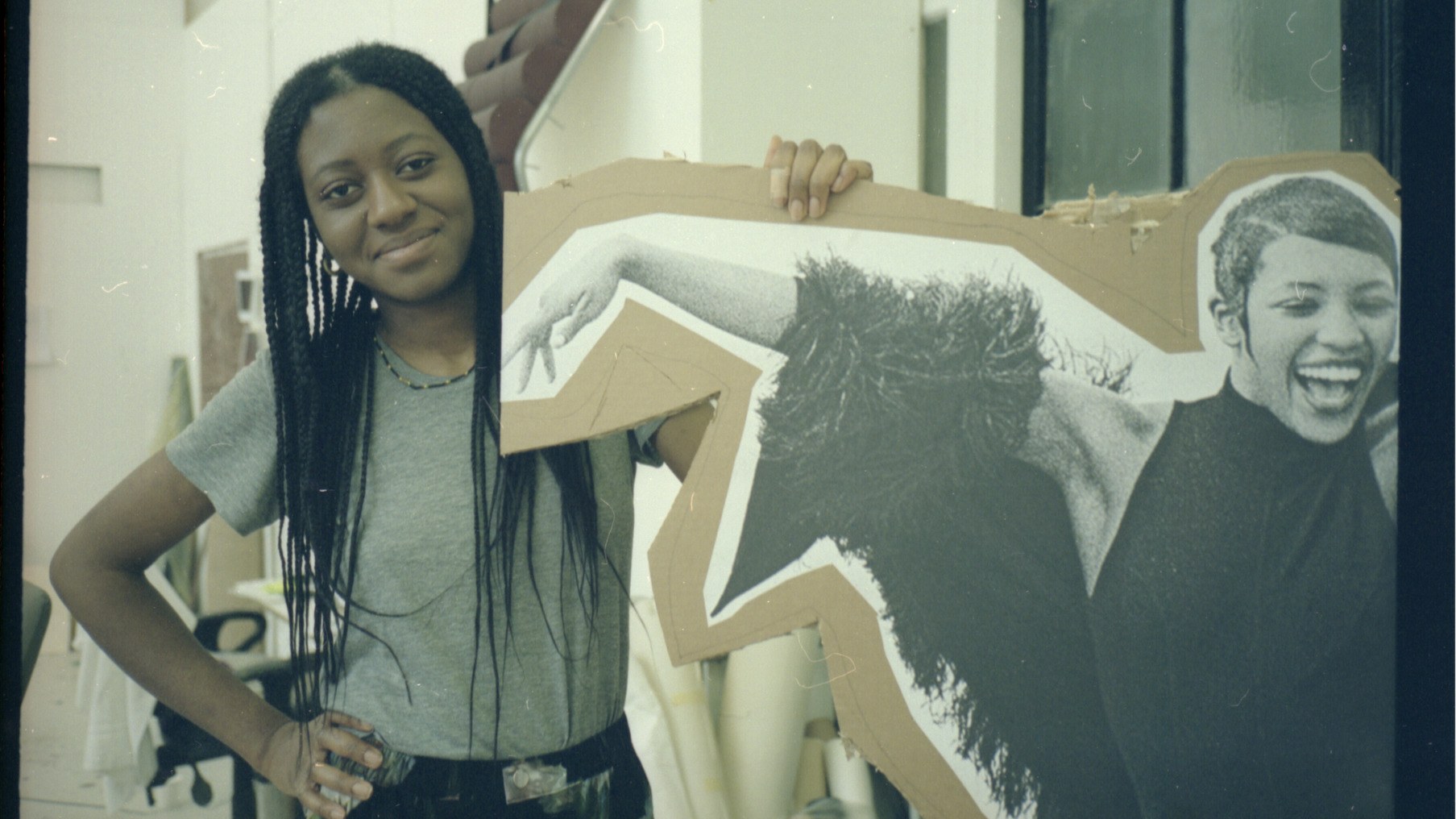 As a black British lover of the arts, your formative years are spent watching hours of shows that very rarely feature anyone like you. If cinema is where fantasies are brought to life, the predominant one appears to be that you were not a part of the world. All the worse when the fantasy is one that chooses to distort you.

That heightens the joy when you see it made right. After a long fight for representation, there have been shifts in funding, resources, and interest that mean a new generation of black filmmakers have created beautiful visual works that feature their poetry, passions, experiences and histories. Vogue speaks to three of these British filmmakers about their practice.

I don’t like to limit my breadth of interest, but I am a Black British working-class person and that influences my work in the same way Joanna Hogg and her films The Souvenir and Exhibition focus on her experience as an upper middle class Englishwoman. I did not see anything I could be like ‘this is my experience’ until I discovered John Akomfrah and Steve McQueen. There’s a particular lack of experimental, progressive, independent films from young female filmmakers that are ethnic minorities.

I loved history at secondary school. When we were looking at Nazi Germany, we had film nights every week. We watched Inglourious Basterds and I was like ‘wow, this is amazing, what if I could make something like this about my histories?’ I love, love, love history. My mum gets annoyed but I’m the family archivist, always looking at pictures, asking questions, making family trees, and finding links between my history and myself.

Unfortunately my school wasn’t supportive of the arts. When I said I wanted to be an artist people were like ‘What?’ The idea of a working class girl from ends being an artist was so rare. I wish there were more opportunities for young people trying to make art.

I am very passionate about social housing, I live in social housing myself, so I started this film trilogy called No News Today. It started with Tower XYZ, then Street 66, ending with Dear Babylon. I am very proud of Dear Babylon because we worked with actors and a professional crew, and me and the producer Lewis did it all independently. It’s a testament to tenacity.

I have two new films coming out about the black experience in London. So They Say launches on Saturday (2 November) at Old Manor Park Library in Newham. The other is called Claudette’s Star, in which young artists discuss who is given a voice, also out in November via screenings. I want to continue making works which question the status quo. As long as people watch and they’re like ‘I learnt something’, that gives me joy.

Growing up, I didn’t see the stories I wanted to tell. I didn’t see people that looked like me or those I grew up with. The few that existed were from outsider perspectives and missed the nuances. What’s important now is to critique, question, celebrate, centralise our own narratives. Black people are not monolithic and shouldn’t have to hold the same ideals or points of views.

I flicked through this book called Blackamoores two or three years ago, with characters like Renaissance paintings. I was curious as to who they were, obsessed with their costumes, and in bringing them back to life. Black To Life, commissioned by the BBC, came out of that and, for me, the critical thing was to reframe academic imbalance. It was an opportunity to present work that could be used in discourse, in lessons, to show to kids. There was pushback in the length and breadth and the language, but there has to be that tension, because if we just did something they were happy with, maybe we weren’t doing the stories a critical service.

Britain is doing a huge disservice to itself by not centralising the role of the African, Caribbean & Southern Asian colonies and how those contributions made it what it was. If everyone knew a more balanced history, there would be less offensive entitlement, and less of a feeling of needing to prove something.

All my life I was taught history through a colonial perspective. Under a white supremacist gaze we’re made to feel barbaric. I had this epiphany last time I went to Nigeria. Reading about African empires and kingdoms, the world’s first universities, I could conceptualise what life would have been like pre-colonisation. There were so many beautiful characters whose stories I want to bring to life.

I did a talk at the National Portrait Gallery and well-meaning college teachers asked how they could do more to engage students during Black History Month. I said localise the narrative: focus on activists and familiar faces that make kids feel more invested.

When I was younger I used to listen to Giggs, The Streets, Oasis, and it sparked my love for lyricism and storytelling. I make films out of my poetry because a lot of people leave school with negative perceptions of the art so I want to make the experience refreshing. I always believed in trying to make poetry more accessible and exciting.

I’m interested in flipping people’s expectations and making the images we are used to surreal and playful. My debut film And They Knew Light, commissioned by Channel 4 for Random Acts, used the same imagery you would find in a drill video but subverted to balance the story and show other possibilities. Secret Life of Gs is a fantastical twist on the stereotype that young black boys from estates go the countryside to sell drugs — imagine if they went to make honey. We don’t have as much access to activities like horse-riding, having a beehive, cultivating honey, as middle-class children do.

A poetry collection I’ve got coming out looks at how architecture choices impact working class lives, their mental and physical health. I grew up on North Peckham estate, which had 65 stories and 1044 homes linked by large corridors, containing a launderette, newsagents — essentially a self-containing microcity. It’s the worst design for people who have little. It contributed to Damilola Taylor’s death as he died inside a no-go area there, so there was no-one to help when he was bleeding out. The possibility of something happening to me was very real, which amps up anxiety.

I’m doing SLOG, which stands for Secret Life of Gs, for people from poor economic backgrounds who don’t get as much exposure to art. I hire a bus and take them to an immersive arts, poetry and music shows.

I want people who have grown up like me to feel seen and to take back ownership of these stories because they get misrepresented. It’s a celebration and documentation — archiving the culture and the times. Before I would respond when I saw misrepresentation but now I’m not in dialogue with any specific voice, programme or headline because it gives their opinions validation. I want to see the media stop gaslighting black people, but it’s bigger than them.

Written by: BY AMEL MUKHTAR