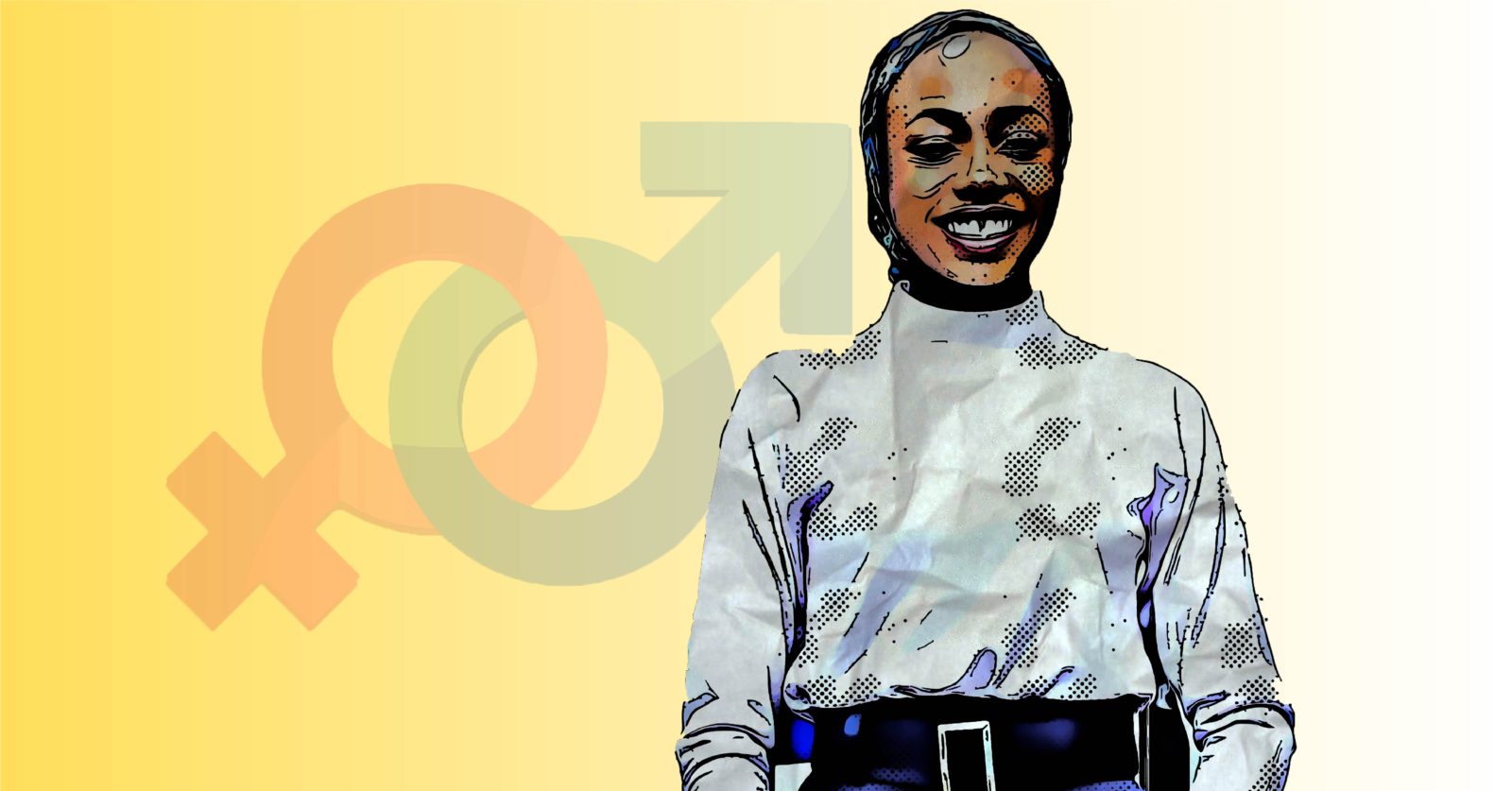 Since the 23rd of May 2020, Nigerian law student Amarachi Nickabugu, has tweeted one law that discriminates against Women, compiling a mega-thread of (currently) 355 anti-Women legal restrictions. As we approach its first anniversary, we sit down with Nickabugu to discover why there’s no clear end in sight. 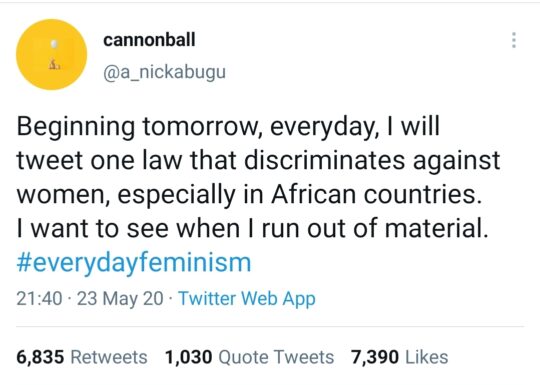 Known as @cannonball on Twitter, Nickabugu, says her foray into feminism was influenced by personal experiences and conversations with her sister. Like many young feminists in Nigeria, Chimamanda Adichie’s We Should All Be Feminists, among others, also proved to be powerful literature that shaped her understanding of gender dynamics, as well as her commitment to dismantling oppressive systems.

Speaking on why she started the Twitter thread, Amarachi said: “I need people to understand that the state is unfair to Women. Not just culture or religion. The law itself is grossly unfair to Women. There are a thousand and one legal instruments that actively disenfranchise and subjugate Women: laws that endorse honour crimes; laws and policies that limit the employment options of Women; laws that impose male supremacy through male-only executive positions in different countries; policies that do not account for maternity leave. I could go on and on. Yet, every other day, I see someone say, ‘everybody is equal in the eyes of the law’. The majority of people believe that Women fighting for legal rights is a thing of the past – a thing of the suffragettes’ movement and that currently, the law treats men and Women equally. That opinion is erroneous, and that is what I seek to highlight. It’s why I thought, ‘I’m going to write out all these sexist laws, so maybe we all can see how serious this is.'”

Nickabugu’s use of the hashtag #everydayfeminism in her thread, thus, worked to contrast the absurdity of these legal frameworks against our complacency as a society to accept them. Many of the most alarming laws spotlighted are from countries in the Global South, namely Africa and the Middle East, which, correspondingly, score low on gender parity reports. The initial tweet has since garnered over 7000 likes and 7000 retweets, with most responses to the thread expressing incredulity over both the nature and sheer quantity of laws named. 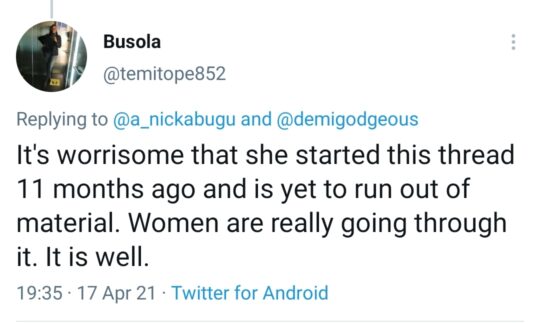 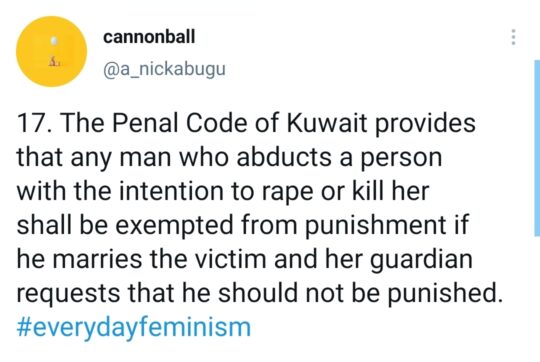 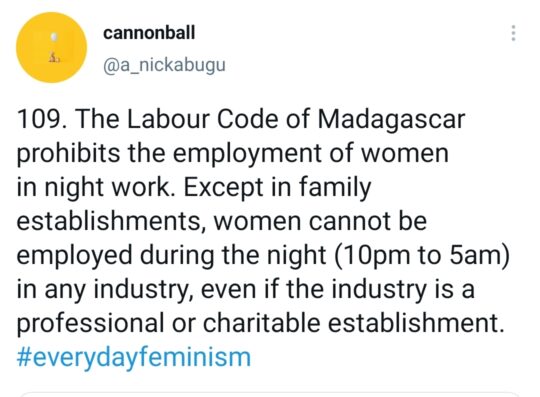 Though an experienced law student, she’s often faced with daily challenges such as collating sources, sieving through legal jargon, and expressing these clauses in layman terms.

On how she navigates these hurdles, she says: “There are a couple of human rights organisations I can trust to give verified news and information about legal discrimination against vulnerable people. Those were my sources at first, so I often download reports from these sources. Every now and then, I sieve through the reports, and I extract each sexist law I find. This was after I had written down the sexist laws I already knew. Also, before I put up each tweet, I double-check to see that it is accurate. The most challenging part for me is finding the actual statute for the law. I like to read the letters of the law for myself. Unfortunately, poor countries do not maintain an easily accessible database of their laws, so it can be difficult to get them at times. It’s interesting and tasking at the same time. Doing the work willingly makes it easier to bear though.” Policy changes often require a multistep approach, but the foremost is often social awareness. For discriminatory laws to be repealed, we have to be aware of their existence.

In Amarachi’s words: ‘To solve a problem, we must first name it. This is why gender equality cannot happen if people do not see the current gender inequality and recognise it as a problem. So there must be a collective shift in culture, towards more Women-friendly attitudes, even outside of government.

“feminist advocacy should make people uncomfortable. It aims to disrupt the status quo – and there isn’t anything comfortable about it” 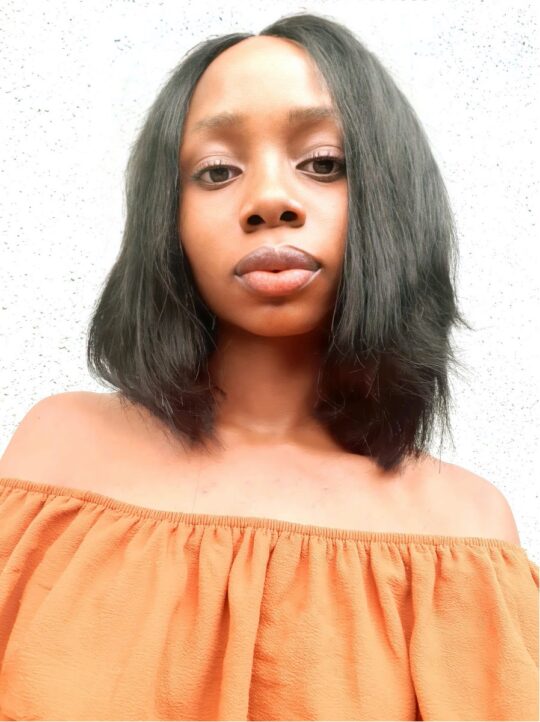 Amarachi went on to prescribe suggestions on how we can transcend social awareness in overturning these bigoted laws worldwide: “To repeal these laws, it is necessary to be strategic. We saw how the national legislature in Nigeria reintroduced the Sexual Harassment Bill after the BBC’ Sex For Grades’ documentary. The Bill failed to scale through parliament in 2016. Three years later, the Bill was reintroduced on the floor of the House. The documentary – and all the commentary and agitations that accompanied it – was the last push that the Bill needed. Today, the Bill has become law. So, feminist advocacy must be strategic. We must fund, support and amplify organisations that aim for policy changes. Also, we must not be afraid of making people uncomfortable. I believe strongly that feminist advocacy should make people uncomfortable. It aims to disrupt the status quo – and there isn’t anything comfortable about it.”

We asked Amarachi what would signify to her the success of her Twitter campaign, and she gave a three-pronged answer: “Getting to 365 days would signify perseverance on my part, and it would also be symbolic – for every day in a year, there is at least one law actively pinning Women down; one signifier of state-enforced misogyny that we must undo.

Also, this is a success for me. Having journalists document the #everydayfeminism thread and expand the scope of the conversation outside of Twitter. Tomorrow, when things get better, let no one say that Women have always had it easy. Let there be abundant evidence that we spoke up for ourselves and stood for something, even when all we had were our words.

But importantly, I do want a change in these laws. I want the #everydayfeminism thread to be a reference for change-makers, community builders, and lawmakers too. When people ask, ‘where do we start from?’, I want that thread to be a ready response. Want to advise or force the hand of the government to change the way it treats Women? The thread has a few pointers. So, that’s it for me.”

Described as a ‘love letter to Nigeria’, the long-form series is steeped in science fiction, and includes themes of class divide and inequality