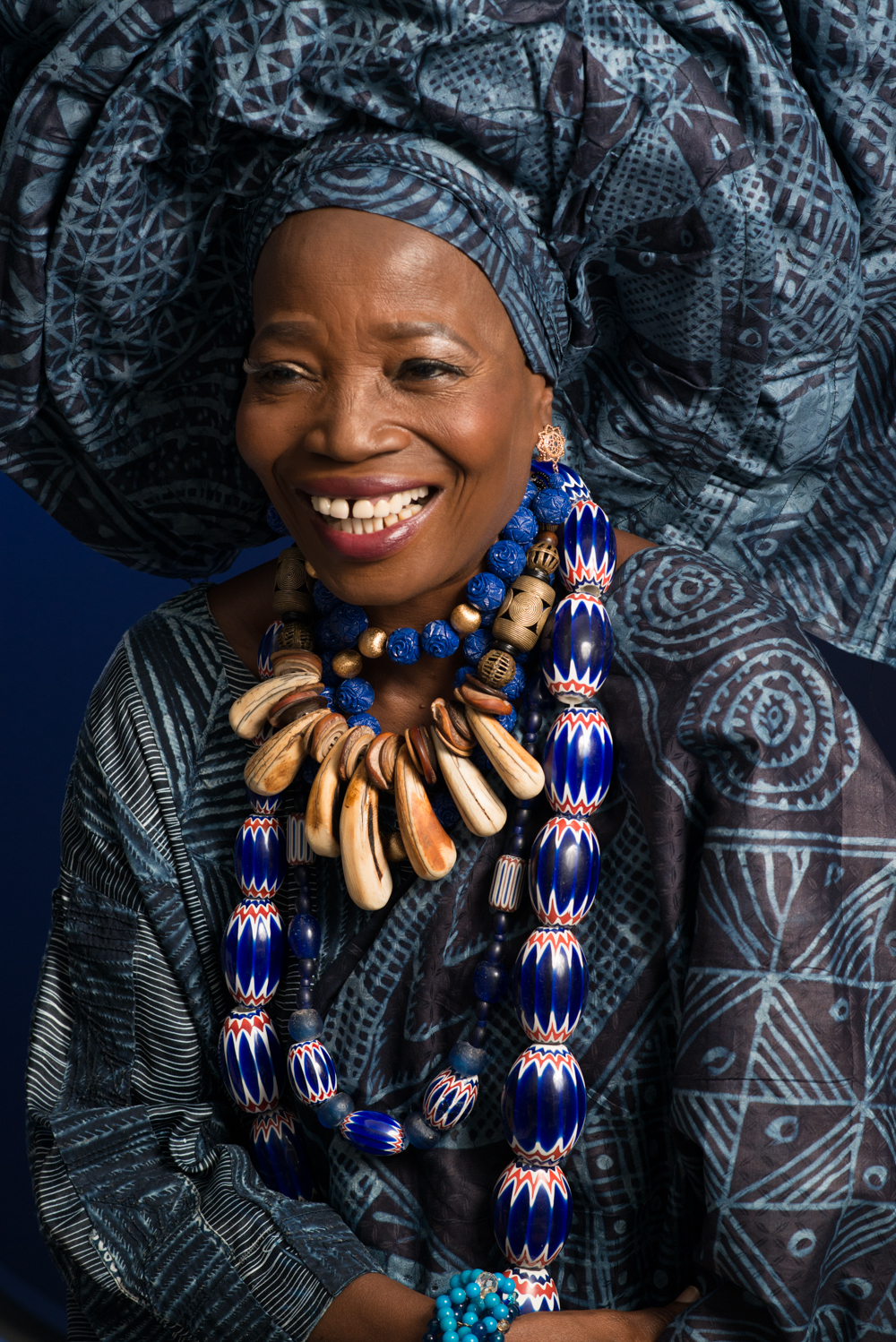 Chief Dr. (Mrs.) Oyenike Monica Davies-Okundaye popularly known and called “MAMA NIKE” by her numerous fans, was born May 23rd 1951, she was brought up amidst the traditional weaving and dyeing practices in her native at a very quiet and hilly village of Ogidi-Ijumu in Kogi State of Nigeria.

In her early life she was a stage dancer and later became an actor featuring as a lead actress in a local Yoruba film “Ayaba”. She is an accomplished professional artist; painter, textile artist, weaver, embroider, and international awards winner. While she is known for her colourful batik and paintings that offers a modernist gloss on traditional themes, she is credited with the contemporary revival of this once fading textile and batik industry.

During the last 20 years, she has delivered numerous workshops on traditional Nigerian textiles to audiences in the US and Europe, using her international success to launch a cultural revival, and building art centers where young Nigerians master traditional arts and crafts. She is the founder and director of four art centers that offer free training to over 150 young artists in visual, musical and performing arts, comprising more than 7,000 artworks.

Nike is the Managing Director of Nike Centre for Art and Culture, Osogbo.  Nike opened this Center with 20 young girls in 1983, solely from her earnings as an artist and without government assistance. Nike provides the girls with food, materials and accommodation, and teaches them how to earn money through their artwork. So far, over 3,000 young Nigerians (mainly violated and abused young women) have been trained at the Center.

Nike is also the owner and curator of the Nike Art Galleries in Lagos, Osogbo Ogidi-Ijumu and Abuja. In 1996, Nike established a textile (Aso-Oke) weaving center at Ogidi-Ijumu near Kabba in Kogi State for the women of the village, employing and empowering more than 200 rural women.

Many African countries now send their students to study textile art at the Center. The Centre also admits undergraduate students from many universities in Nigeria for their industrial training programmes in textile design. Over the years, the Center enrols students from European countries, Canada, and the United States of America. International scholars and other researchers in traditional African art and culture also visit the Center for their research work into Yoruba “Adire” fabric processing and African traditional dyeing methods.

In June 2002, Nike established an Art and Culture Research Center at Piwoyi village, FCT Abuja, with an art gallery and a textile museum, the first of its kind in Nigeria which provided a functional platform for research into the Nigerian traditional textile industry in the Federal Capital Territory area of Abuja.

In May 2006, Nike was awarded “Ordine Della Stella Della Solidarieta Italiana” one of the highest Italian national awards of merit by the government of the Republic of Italy in appreciation of her efforts in using art to address and solve the problems of Nigerian prostitutes (sex workers) in Italy.

In 2007, Nike founded the Nike Art & Culture Foundation with some notable eminent Nigerians as Trustees, with the main aims and objectives of fostering Nigerian cultural heritage. Nike has received significant recognition for her hard work, devotion and dedication towards the promotion of art and culture in Nigeria.

Moreover, Nike’s painting is permanently featured at The Smithsonian Museum as of 2012, and her work is also part of the collection of the Gallery of African Art and The British Library. The National Museum of African Art named Chief Nike Davies-Okundaye as one of the most Contemporary Women Artist of Africa.

Mama Nike participated in many documentary films including “KINDRED SPIRITS” sponsored and produced by Smithsonian Museum in Washington DC and a CNN feature documentary film “AFRICAN VOICES”. In January 2016, CNN again featured Nike in another documentary film “INSIDE AFRICA” which tells about Africa’s most engaging personalities, exploring their lives and passions.

Chief Nike is also a vehement activist championing heritage preservation, women’s rights, gender based violence, among others. Her indelible global influence galvanised tremendous support for the ‘Bring Back Our Girls‘ campaign which advocated for the return of the 276 young girls that were abducted from the town of Chibok, Borno State, Nigeria.

Chief Nike Davies-Okundaye’s long awaited biography BATA MI A DUN KO KO KA authored by Kofo Adeleke, with a foreword written by former US Ambassador to Nigeria, Dr Robin Renee Sanders – was launched 19th December 2020 at the CIG Motors Headquarters on Ligali Ayorinde, Victoria Island, Lagos. The event was attended by Nobel laureate Professor Wole Soyinka and CEO of the Nigerian Stock Exchange Oscar Onyema, amongst many other distinguished guests. The memoir details Mama Nike’s arduous and historic journey on rising to fame, giving its readers an un-eclipsed insight into the life journey of Mama Nike.