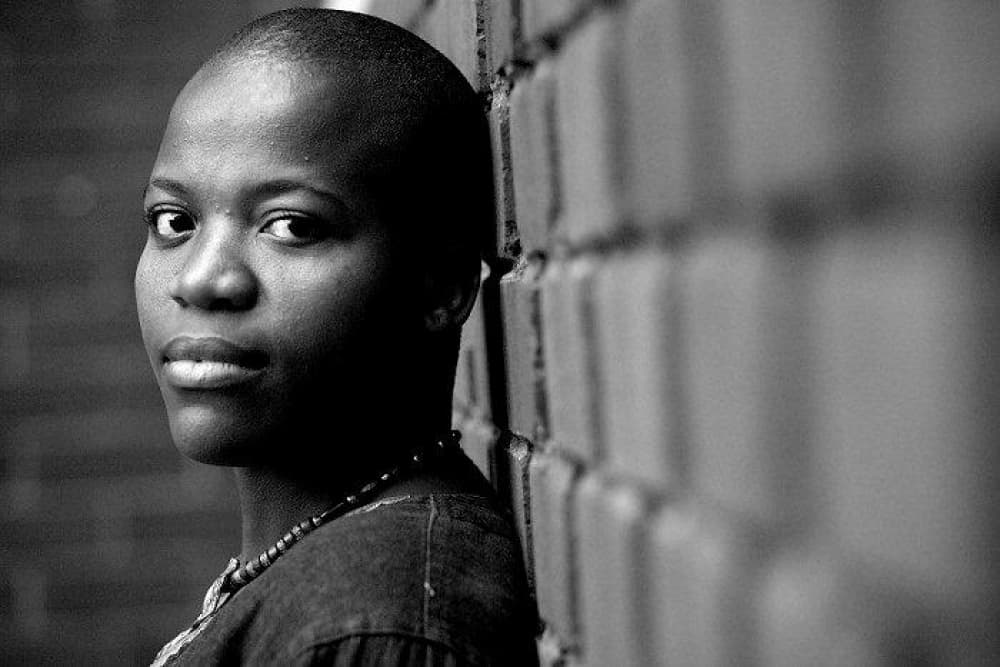 Zukiswa Wanner is a Zambian-born, Zimbabwean raised author who’s made a name for herself within the world of publishing, journalism and African-focused activism.

Introduced into the world in 1976, Wanner spent her formative years hard on the heels of a post-colonial Zimbabwe during the 80s and 90s. She cites Shimmer Chinodya’s 1989 release, Harvest of the Thorns, as one of the texts that inspired her to pursue writing as a career.

Such passion was the driving force behind her decisions to study Journalism at university, graduating from Hawaii Pacific University in Honolulu. Though Wanner also hilariously claims that she chose that university because that was the only place she knew of where her parents didn’t have friends who could spy on her. She began her working life writing opinion pieces for various publications, though it wasn’t until she released her debut novel in her early 30s that she felt like a writer. 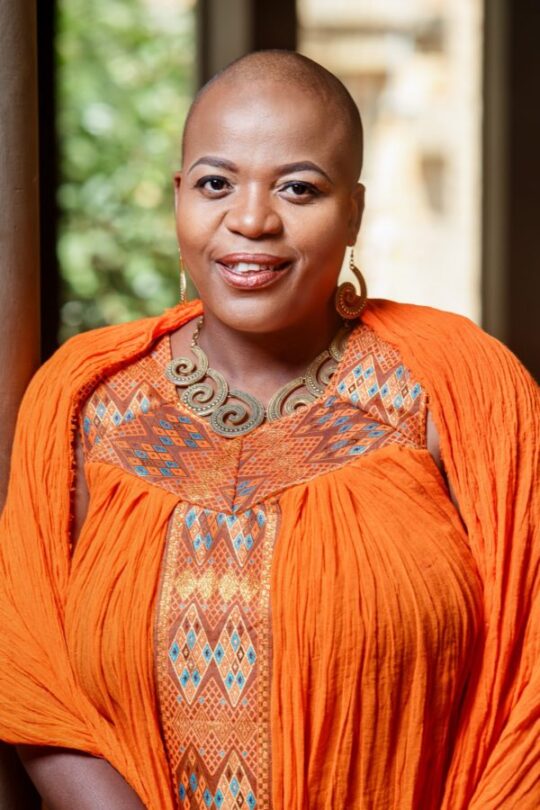 She completed the first draft of her debut, The Madams, in two weeks after she was challenged by the late South African writer, Lewis Nkosi, to delve into fiction writing. The book follows the lives of three middle-class friends who are forced to relook issues like race, class, relationships and broken barriers that were caused by apartheid after one of them decides to hire a white maid. On reflection, Wanner concludes, “I very much doubt I would have been a writer had it not been for the challenge”.

After this, Wanner went on to author Behind Every Successful Man (2008), Men of the South (2010), which was shortlisted for the 2011 Commonwealth Writers’ Prize (Africa region), as well as the Herman Charles Bosman Award. In 2014 she wrote London Cape Town Joburg, which won the K Sello Duiker Memorial Literary Award in 2015.

When asked to discuss the driving force behind her literature, she regarded, “The running thread in my work is questioning identity and patriarchy. Behind Every Successful Man was my trying to have a man and woman’s voice. I wanted to give a voice to the dreams of women who are often not considered go-getters by a twisted society because they are housewives and question the motivation of men who try to suppress their wives’ dreams.

“Men of the South was an answer to The Madams, because I wanted to show how patriarchy hurts men as much as women. For Maid in SA, I wanted to give voice to domestic workers (and to a lesser extent, their madams) in a satirical manner that would make people reflect. When I wrote London Cape Town Joburg, I wanted the reader to question the oft-not talked about rape of boys. Hardly Working was a reflection of my journey as a writer, as a woman, as an African and how the world engages with me. 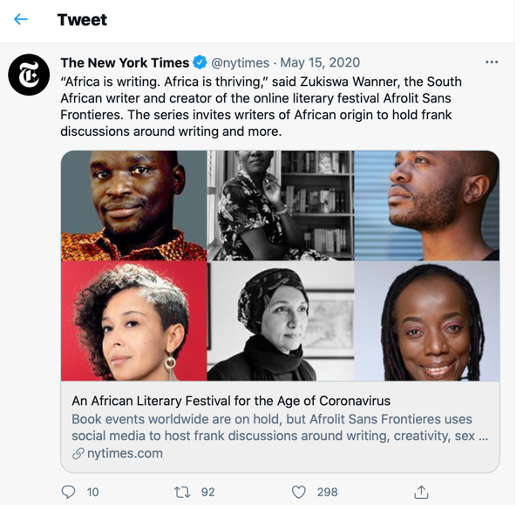 “The children’s books are generally supposed to allow children to be entertained but also maybe get them thinking, because children are really much cleverer than we give them credit for as patronising adults. I knew much less about life at 15 than today’s 10-year-old.”

Although Wanner never struggled to find a home for her books, she became disillusioned by the gaps she saw in the industry.

“I saw that SA publishers, in particular, seemed more keen for their writers to get validation from Europe or the US, and yet, many of our stories speak directly to this continent.”

Noting this Western bias, along with the need to translate African works across linguistic borders to improve accessibility, she took matters into her own hands. In 2018, she established her own publishing company, Paivapo.

Discussing the inspiration behind her venture, she said, “I know Lusophone and Francophone African writers’ work only because someone in the west has deemed them worth translating into English. With Paivapo, I won’t need to wait for the Western validation to be able to access Congolese or Angolan or Ivorian writers’ works. All I would need to do is to talk to readers and writer friends in Lusophone and Francophone countries and ask them to recommend a book they think is worth engaging with. This is why I am so excited that I got the translation rights to Angolan writer Yara Monteiro’s novel. As a writer, I am also excited that Mozambican publishers Ethale got the rights to The Madams. Because they, like many on the continent, are who I think of as my primary audience.” 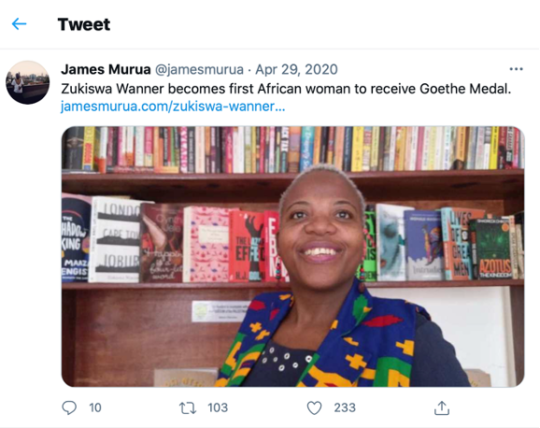 Wanner, whom even today gets excited when she has a story idea, wants to create literary awareness and instil a passion for reading among her country-people. Along with her company, she initiated the Read SA campaign in 2009, which ran until 2019. The purpose was to encourage Southern Africans to read Southern African works, donating locally written books to schools and connecting professional writers with students. Reflecting on this, Wanner said,

“It was beautiful to see kids who had never engaged with a living writer.”

Living under COVID-19 has only presented more opportunities for Wanner to spread her Pan-Africa agenda, launching Afrolit Sans Frontieres in 2020. It is a virtual platform that allows African writers and readers alike to connect in what has become one of the most prolific literary events on the continent.

Wanner’s efforts throughout the years have not gone unnoticed. In 2014, she made Hay Festival’s Africa39 list, which comprises “the most promising 39 authors under the age of 40 from Sub-Saharan Africa”. The following year she won the K Sello Duiker Memorial Literary Award for her aforementioned book, London Cape Town Joburg. Most recently, she was named African literary person of the year by Brittle paper and, to top it off, she gained international acclaim after becoming the first African Woman to be awarded the prestigious Goethe Medal, alongside Ian McEwan and Elvira Espejo Ayca in 2020. The yearly prize is given by the Goethe-Institut to honour non-Germans “who have performed outstanding service for the German language and for international cultural relations”. Such an achievement is a true testament to her linguistically inclusive objective.

When questioned on plans for the future, she responded with, “There is so much more I want to do; I need to do. I have books in my mind that need to be written, festivals I want to curate, other books I want to publish and at least one book I read and enjoyed so much, but I need to acquire its rights and edit it.” It looks like the unstoppable Zukiswa Wanner is writing her name into history, one book at a time.

Written By: Makanaka Mavengere – a Zimbabwean author, playwright and screenwriter. Her debut novel ‘Perfect Imperfections’ was published in 2019, she is currently working on a few film and stage productions. Follower her on Instagram

Header Image: courtesy of This is Africa