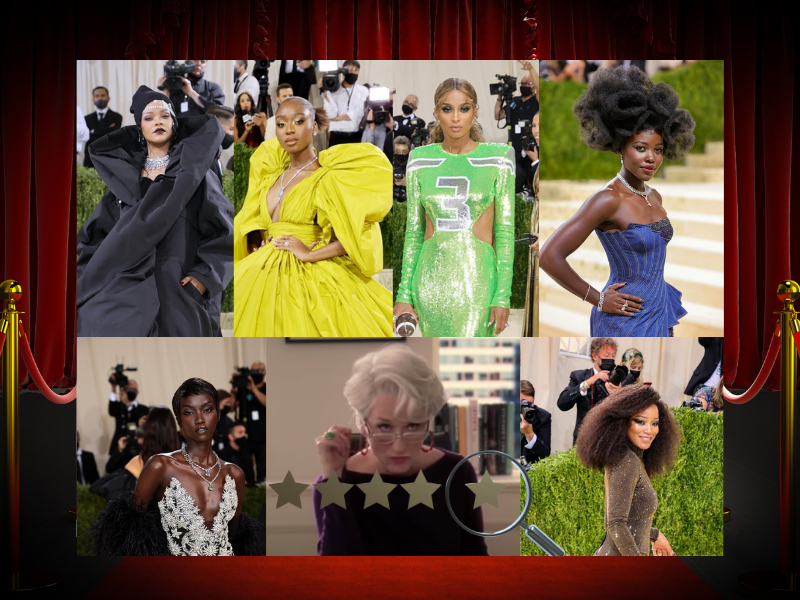 2021 Met Gala: Black is Fashion, but not on the Red Carpet

2021 Met Gala: Black is Fashion, but not on the Red Carpet

Usually held in May, the Metropolitan Museum’s Costume Institute Gala, fashion’s most highly anticipated event took place on September 13th during New York Fashion Week. A night of opulence, glamour and of course, high fashion, the Gala is a fundraising benefit for the Metropolitan Museum of Art in New York City. The event welcomes influential celebrities, creatives, and industry giants. But this year, we saw a few first-time attendees and some questionable TikTokers and Youtubers.

We know fashion is political – just think about how Melania Trump exited the White House clad in problematic designers earlier this year. The former First Lady left in a somber looking all black ensemble, with a Chanel jacket, Dolce & Gabbana dress, Christian Louboutin patent leather stilettos and a crocodile Hermès Birkin bag estimated to be worth over $70,000. Coco Chanel was a deeply controversial designer with ties to the Nazis and Dolce & Gabbana has been trying to rebrand with Black celebrities such as Normani, Megan Thee Stallion and Ciara with their fashion show in Venice, just last month.

Though the theme was broad, American designers were inadequately represented in a theme honoring them but instead, the European fashion houses took centre stage as usual. The usual Christian Dior, Givenchy, Valentino overshadowed Black American designers. Both Christian Dior and Givenchy are housed under LVMH and have the money to splurge on a few tables, it’s not the same for a lot of these Black American designers. In order to attend the gala, designers pay at least $275,000 for their tables. This ‘cash for access’ requirement, makes it difficult for Black designers to participate. It’s not a matter of talent or creativity, but capital and wealth.

The Met Gala presented the optimal opportunity to demonstrate greater diversity and inclusion, but I guess maintaining the status quo is more important than integrity and bucking convention.

Apart from Aurora James of Brother Vellies creating a gown with the words ‘tax the rich’ for Congresswoman AOC, I can’t help but wonder how many Black female designers were invited or even worn at the event. It would have been amazing to see the likes of Carly Cushnie who founded American fashion house Cushnie, Anifa Mvuemba of Hanifa, Fe Noel or Tracy Reese.

It’s fair to say there was a clear lack of artistic representation on the red carpet, notably looks created by Black designers like Kerby Jean-Raymond of Pyer Moss, LaQuan Smith and Claude Kameni whose designs actually feature in the museum’s exhibition this year were absent. The Met Gala presented the optimal opportunity to demonstrate greater diversity and inclusion, but I guess maintaining the status quo was more important than integrity and bucking convention.

Keke Palmer was an incredible host, with her vibrant and infectious energy, she made everyone feel welcome and comfortable. However, with questions about gatekeeping American culture and “who gets to be an American” juxtaposed with this year’s theme seemed at odds to me. If you thought American exceptionalism had a day off, you thought wrong.

With that, let’s get into these looks! We saw old Hollywood glamour, burlesque inspirations, denim, and an ode to Black American streetwear. I would have appreciated a sprinkle of 1920’s Flapper dresses, some 60’s Black Pride and some 70’s disco funk.

For her first ever Met Gala appearance host Keke Palmer, embodied Diana Ross in a Sergio Hudson dress with her voluminous natural hair.

Discovered at Howard’s Homecoming in 2017, South Sudanese model Anok Yai channeled Old Hollywood glam, in a figure hugging Oscar de la Renta dress. Her outfit pays tribute to entertainer and civil rights activist, Josephine Baker. I was dazzled by her outfit and how she owned the night.

Our favourite Kenyan actress blew us away and took the theme of American fashion seriously with her dark wash denim Versace dress. Now we know denim isn’t originally American but it is definitely a staple in American fashion. Not only did her outfit blow us away but her hair too! Inspired by the works of Lorna Simpson, her hair was fluffy and was styled to imitate tulle, according to her hairstylist.

When Normani walks into the room, she commands it. With her chartreuse regal Valentino gown, the ‘Wild Side’ singer entered her first of hopefully many Met Galas with her natural hair pulled back into a bun. She said to Keke “Yellow pops on dark skin. I feel regal. I feel like a queen” and she was right.

Some other notable mentions…

Alicia Keys dressed up a sheer shirt with a tulle skirt. Getty Images