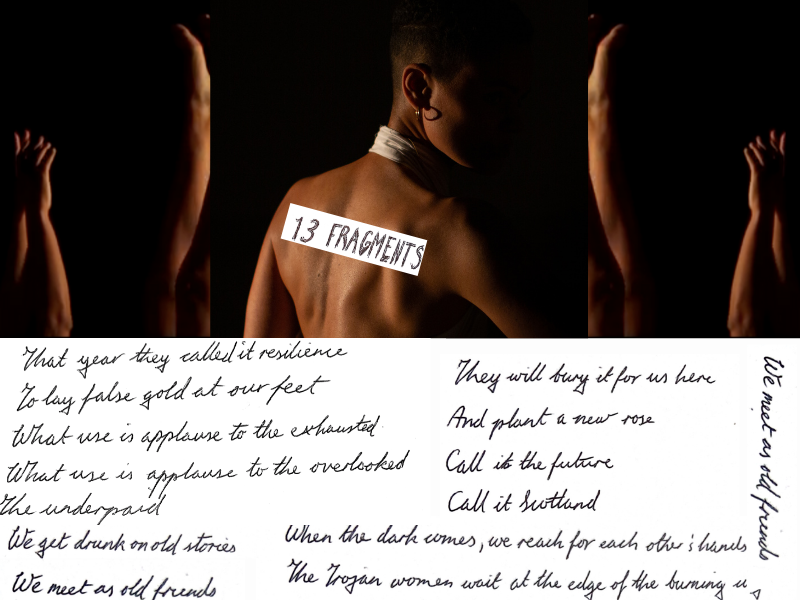 Hannah Lavery’s Thirteen Fragments is an exploration of the realities of marginalised people in Scotland during the pandemic era, especially for those who identify as a Woman. The film was co-produced by the National Theatre of Scotland and The Royal Society of Edinburgh (RSE). It was commissioned as part of the RSE’s Post-Covid-19 futures commission.

Lavery is an award-winning writer whose work often deals with identity and visions of social equity. She recently wrote and directed The Lament for Sheku Bayoh, a 2020 theatre production that interrogated the widespread, under-appreciated impact of police brutality in Scotland.

Her work is significant because it speaks truth to power in a nation that is often quick to outline its past victimhood while ironically shy to admit to its historical ills against others. Lavery reminds us that it is far from a post-racial society. The evasive notion of ‘Scottish exceptionalism’ does not reflect the reality of those who find themselves rendered to the margins of social belonging.

In this film, though her words engage with mundane, day to day living, they are underlined with an edge of the profound and the universal. For instance, Lavery muses about face masks, frontlines and ‘shackled days’, painting images of individuals grappling with a significant change within and between themselves.

In this way the political and emotional upheaval of our contemporary world is addressed by poems that outline the dilemmas brought about by identity, by moving through the world as a non-white individual and as a Woman.

The pandemic saw increased conversations about identity and race as the brutal murder of George Floyd by the police persisted in public consciousness.

Notably, Lavery’s depiction of identity and the limits of social justice conversations is laid out in a vulnerable way. Her poetry does not demand a resolution to social ills but demands attention and curiosity about the type of world we want to create.

The tone of righteous anger and weariness in Lavery’s language suggests a hope for a world where Women are not required to be strong, to grind their teeth and endure.

The experience of viewing Thirteen Fragments is enriched by an interpretive dance practice. Fluid measured and deliberate movement underpins Lavery’s performance of her striking poetry. Here Natali McCleary’s choreography of her body and others deepens the sense of impact of Lavery’s words.

Additionally, this is a film whereby the images appear to complement and emphasise the poet’s words, rather than dominate them.

It begins with an intimate close up of subtle movement across a dancer’s back. The dancer moves fluidly, the skin on their back flowing and rippling as Hannah narrates, ‘Can you see your name?/ No?/Wait./I will write it in the air for you…’. By opening with the idea of naming, she connects the dots between language, heritage and belonging, themes that will appear throughout the film.

Her poetry also outlines the idea of female strength as a state of being that is born out of necessity rather than choice. ‘That year they called it resilience/ To lay false gold at our feet/ What use is applause to the exhausted/…the overlooked/…the underpaid.’

The tone of righteous anger and weariness in Lavery’s language suggests a hope for a world where Women are not required to be strong, to grind their teeth and endure. While in search of an improved world, she paints a vivid image of female friendship:

‘We meet as old friends

In the park on a bench

Drink rum in the cold

She tells us she is done with coping

We get drunk on old stories

When the dark comes, we reach for each other’s hands

The Trojan women, wait at the edge of their burning city.’

This depiction of friendship gives an insight into the ways that community is a source of healing, through sharing difficult experiences, one may feel less burdened. To reach out to one another and connect is to fulfil one of the most basic human needs for companionship, this needs to be acknowledged.

Also, Lavery’s exploration of identity also dives deep into the concept of gender, legacy and belonging:

‘In a dream my grandmother appeared

Lily of the valley…’

The image of her grandmother reflects Lavery’s interest in cycles of human experience, of wisdom and beauty contained in the past, in one’s personal history. In a sense this image of an elegant grandmother figure is one that gives hope for one’s future.

It is the comfort new generations may find in the fact that their predecessors faced similar trials, that they too will hope to overcome, one day.

In a statement on the RSE’s website, Lavery emphasised her inspirations for the work and the messages she intended to convey.  “Inspired by the work of the RSE fellows, I wanted to make a film that would speak to the experience of women and especially women of colour, using poetry, dance, music and film.

She continued, ‘I have been so lucky to have been joined by a dream team of women collaborating with dance, music, and film to create a provocation and a meditation on the time we are living through and what that means for us all as we look toward the future.”

Generally, the impact of the film’s contributors is a testament to the collaborative strands necessary to create a motion picture. Combining spoken poetry with moving image and music, it took a highly skilled, multidisciplinary team to create.

Beldina Odenyo/Heir of the Cursed created a selection of sounds that enabled tension to build. Subtle guitar riffs and repetitive beeps created a sense of atmosphere, almost punctuating Lavery’s language.

Additionally, filmmaker Beth Chalmers generated a sense of visual focus that complemented the movement and sound, as her lens drew close to the human body in a way that was intimate, complementing the vulnerable quality of Lavery’s poetry.

Overall, Thirteen Fragments was a contemplative, slow-paced exploration of the ability of human beings to dream while they endure. I hope we might come close to Lavery’s vision for a world where Black, non-white female pain is no longer the norm, a world where strength can be accessed without suffering.