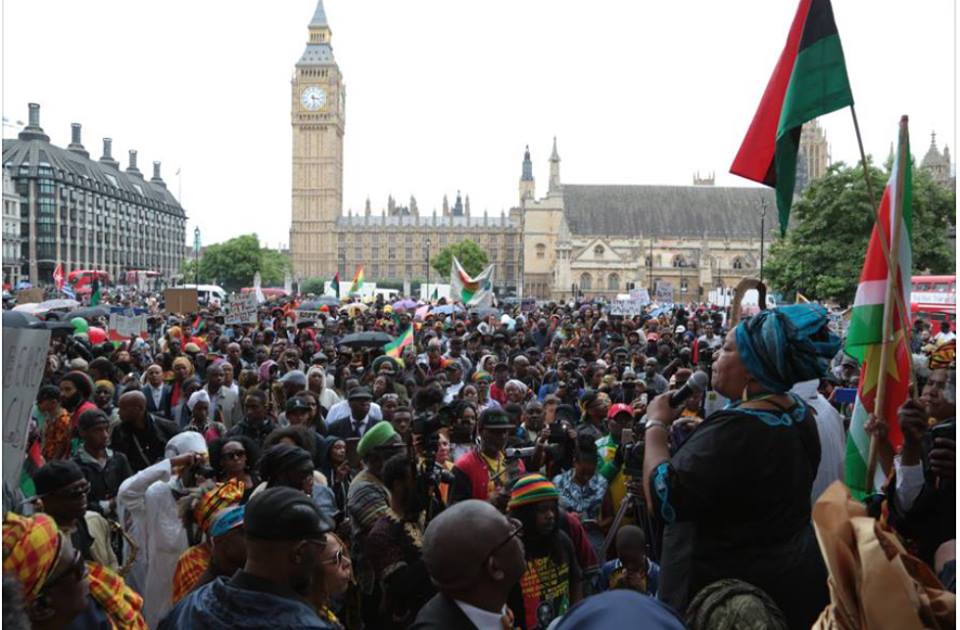 This 1st of August marks the seventh year of commemorative protest events to mark “Emancipation Day“.

Emancipation Day is commemorated in the Caribbean and some parts of Africa, marking the passing of the 1833 Abolition of Slavery Act, which came into force on 1st of August 1834.

The passing of this Act, however, did very little to truly emancipate enslaved Africans; instead it legislated for compensation to be paid to British enslavers (rather than the enslaved).

This was fully implemented with the 1837 Slave Compensation Act, that compensated the enslavers to the sum of £20 million, amounting to 40% of the UK Treasury’s annual income.

This crime against humanity resulted in inter-generational social death, unjust impoverishment, dispossession and social displacement for Africans and People of Afrikan descent; who continue to be impacted by such today.

Groundings, as championed by Afrikan Guyanese scholar-activist historian, Dr Walter Rodney, are popular education and conscientisation sessions, with grassroots forces for organising resistance actions towards the concrete struggle for a new society and another world.

The theme for the Groundings is “Uniting to Stop the Maangamizi for our Very Survival: Planet Repairs Now!”

Maangamizi is a Kiswahili term for “Afrikan Hellacaust”. The event aims to promote the necessity of stopping the genocide and ecocide of Afrikan people and our environments and the relevance of reparatory justice and environmental justice to the advancement of planet repairs solutions to the racist climate and ecological crises, disproportionately impacting peoples in Afrika and other parts of the Global South and their diaspora communities in the Global North as well as the weaponisation of pandemics such as Covid-19, anti-Black racism and its specific form Afriphobia.

We will also celebrate the decades of efforts made in and beyond Lambeth which have culminated in the historic passing of the motion initiated by the Stop the Maangamizi Campaign and Green Party – “Atonement and Reparations for the Transatlantic Traffic of Enslaved Africans” – passed by Lambeth council on 15 July 2020.

The international presidium that will preside over these Groundings includes Togbe Adza Tekpor VII (Paramount Chief of Avatime, Ghana), Dukofenokploga Nyoefe Yawa Dake (Co-Vice-Chair, Ablodedunovisiha of Ablodeduko, West Afrika),  who belong to the Maatubuntumitawo Global Afrikan Family Reunion International Council; as well as Daira Elisa Quinonez, an Elder of the Palenques of Afrodescendant Communities of Resistance in Colombia.

There will also be a live link-up from the 31st annual national convention of NCOBRA (the National Coalition of Blacks for Reparations in America).

A core aspect of the Groundings, is that Brixton will be decongested to reduce air pollution and transformed into a public action-learning space featuring a number of arts-focused reparations.

This includes: the Arts and Culture Grounding space hosted by Mad Professor of Ariwa Sounds, the renowned dub/reggae label and recording studio in South London, which will feature a number of performing artists; as well as the Sankofasafarinta Internationalist Solidarity Exhibition, consisting of various sections like the Living Art Project – “I’m here because …” inviting attendees to create a response to these words in advance or add contributions on the day.

The Groundings are being supported by Rhodes Must Fall Oxford, A Tribe Named Athari, (TNA) as well as Extinction Rebellion.