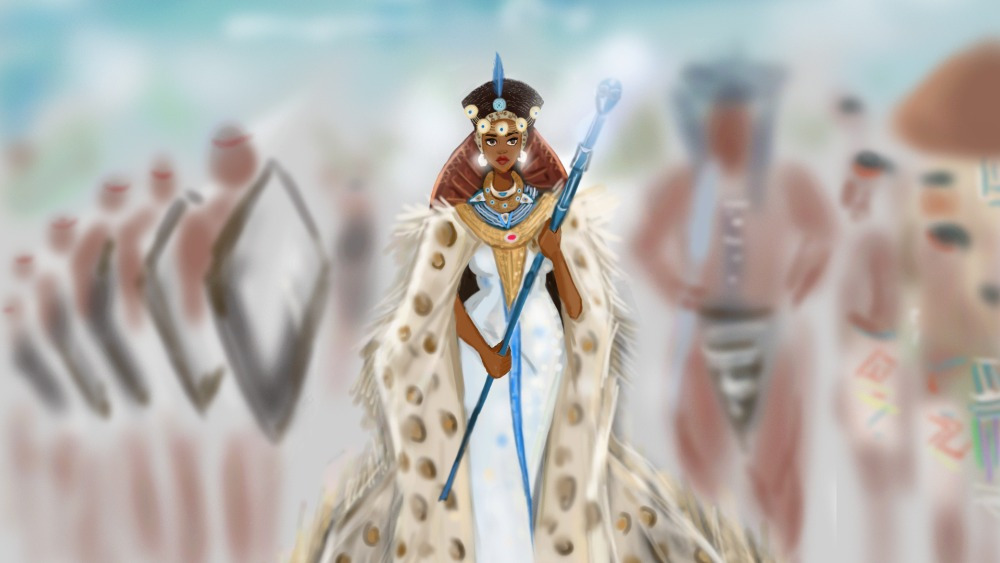 Set up at Barmack’s L.A. based Wild Sheep Content, the high-concept “Queens” is an attempt to reclaim for Black people around the world a history and source of inspiration that has been denied them by mainstream media and public education.

The stories, one per episode, are being positioned as four-quadrant family-friendly entertainment with a target age group of 10 and up.

They will mesh real-life events ranging over thousands of years of history and authenticated by historians with a dash of magic and, as the series’ central visual look, Kobi’s character art. Her images have been used in multiple television shows — one is hung on a doctor’s wall in “Grey’s Anatomy” — as well as ad campaigns showing sophisticated, empowered Black women in a modern world.

“Queens” is the second show that teams Barmack and Kobi. Variety can reveal the pair is in paid development on a series for ViacomCBS-owned BET. The series, “La Femme Noire,” is an animated “Sex and the City” type romance series based on Kobi’s Instagram drawings, featuring Black women from around the world. The series is being written by Yvette Foy, whose credits include work on “First Wives Club,” a BET Plus series.

“When I started putting my artwork on social media, it was because I didn’t see images of sophisticated Black women. It’s really about not going along with how the media — mostly the American media but sometimes Europe’s — see Black people.”

Kobi has two daughters, and explained that, “One will tell me: ‘I want a beautiful dress like one worn by a Black queen or princess.’ But she’d also ask me if there have really been any Black queens and princesses. I’d show her history books and she’d say — she’s 12 — that they were complicated. So I started to draw them for her.”

There’s love, for example, in the story of  Queen Amanirenas of Kush, modern-day Sudan, who fell head over heels for Emperor Terigetas who became her soulmate. The essence of Black love and the true definition of a power couple, according to a synopsis, they ruled over Kush until Terigetas died in battle. Heartbroken, Amanirenas took up his warrior’s mantle, leading her troops into battle and — remarkably — rolling back Roman Emperor’s Caesar Augustus’ push south from Cleopatra’s Egypt into the rest of Africa.

Other episodes feature 19th century Queen Mother Yaa Asantewaa, who battled colonialism; Queen Amina, in 16th century Nigeria, who created trade routes throughout Northern Africa; and Queen Makeba of Sheba, known as Queen of the South in the Song of Songs, who lived around 900 B.C. and told riddles to King Solomon.

“I draw for my daughters and for all women,” said Kobi, who sees the series as “really international. There are Black people on every continent. I want to tell them: ‘You’re ancestors were queens, not only slaves.’ Now, when everybody wants to fight for their rights, we need this positive image.”

Drawing on Kobi’s broad style, which ranges from pictures of glamorous empowerment to studies in psychological observance and works playing up rich natural tones, the episodes will focus on the Queens’ crux decisions which nail their characters and define their lives. The stories will also be laced with magic.

“There is a through line in Nicholle’s art that is aspirational,” said Barmack. “If you look at her Instagram account, so many of the images are of things that are grounded in real life but 10% magical.”

“We don’t want too much magic; we don’t want to lose the story,” Kobi says. “But there is always magic in Africa. You can’t have an African queen without a little bit of magic. And we all know about Black Girl Magic,” she added, echoing a popular tag on social media.

“Queens” will likely use storyboard artists in France and then an animation studio in South Africa and employ both writers that have experience in the markets where the stories are based and U.S. writers who are experts in animation, Barmack said.

The series comes at a propitious time. Kobe points out that Black people around the world are increasingly discovering and embracing their past. “Today, Black people want more education and they are asking about the diaspora and you can sense the same in Canada, in the Caribbean, in Brazil and in Africa of course,” she said.

“Networks around the world are trying to find programming, especially for kids, that is more diverse and is covering ground that hasn’t been covered,” Barmack added.

“The world isn’t going to go back to normal any time soon,” he told Variety. So there is a “real opportunity” to push animation. “It’s one of the few mediums where you can have people working full time.”