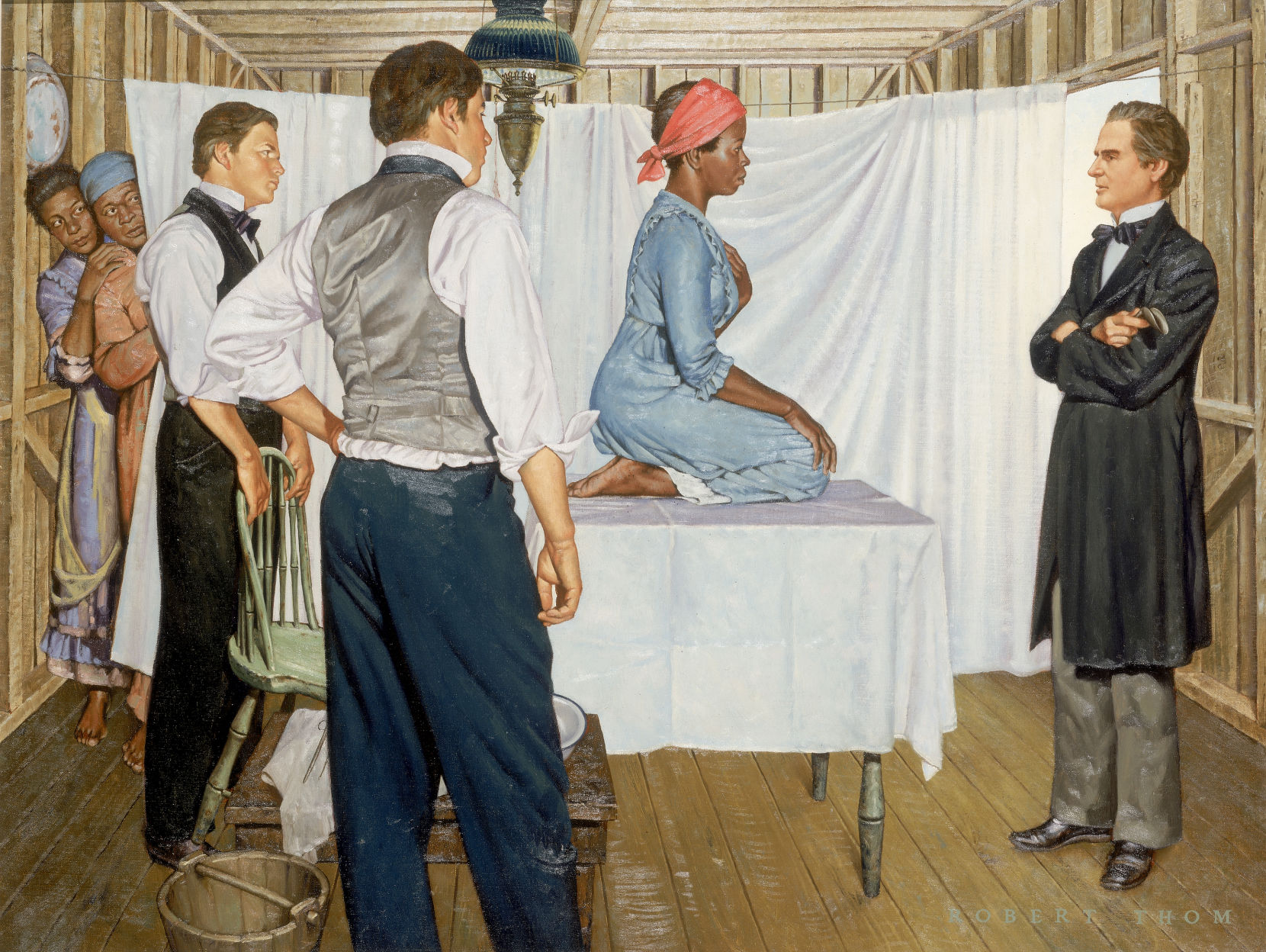 Houses of horror built by Dr Simms for corrupt gain

In the name of Gynaecology, our women were restrained

He labelled them as breeders, and published his research

Torture was a day job for the doctors from the church

Blacks were unintelligent, erratic and would lurch

Based on such ideologies, a false pre-tense emerged

They didn’t reproduce as much, and work was mainly rest

If they had a ‘gyno’ issue, it was instantly addressed

They were thought to be promiscuous and always stood accused

But the black men could not intervene; their manhood was abused

A myth that blacks were less human was constructed by liars

Experimental surgeries meant that anyone could try us

It was certified by doctors, who were friends with slave suppliers

The hospitals were built by slaves, who also served as staff

They mastered nursing and midwifery as career paths

In terms of sexual abuse, they did still feel the wrath

Racism became the norm, ’cause Science made it so

Journals from the deep south stated all we need to know

If the Med School needs cadavers, then a slave has got to go

It was rare to see any black female moderately dressed

If pregnant, they would dig a hole and lie them on their chest

Birthdays peaked in winter, when the crop seasons were done

If the labour force was fertile, the plantation was well-run

An execution date was halted until mama birthed her son

And the orphan, born from rape, will spend his lifetime being shun

Rapes were public knowledge because blacks were unprotected

The surgeries that followed showed that slave health was neglected

So fertility was snatched away, instead of being corrected

The real Mothers of Medicine were Slaves of Gynaecology

should today be logged and critiqued in the field of Criminology

A lady named Matilda had a stillborn due to stress

It’s safe to say her owner was entirely unimpressed

The experts were audacious and proceeded to suggest

Celia – a teenager – killed the man who raped her

And Mary Smith was unconscious when Dr Eve undraped her

She questioned how and when and why her uterus escaped her

STIs and tumours would cause bleeding from strange places

‘Menstruation from the breasts’ was diagnosed in cases

Rose was worth one dollar, as were most elderly faces

Baron slaves without health skills were not retained for their graces

Remedies with tree roots was a well-known slave life hack

They did C-sections on one another, nobody would slack

The field was dominated by men of European descent

A space for sexual deviance and practising torment

‘Sons of the South’ travelled worldwide for medical events

And many hid their black girlfriends because of what that meant

They knew that, biologically, everyone’s the same

But disregarded factual information without shame

And the Glover Brothers owned plantations like it was a game

The Campbell Bros owned hospitals and they, too, followed suit

They held black female organs like they were forbidden fruit

There was no such thing as harm to slaves, so no chance of lawsuits

The legacies live on today, they still say that we’re strong

Indeed, we are but that’s no way to state where we belong

Experiments with vaccines on black bodies is still wrong

Black men’s dignities are stripped, even when they obey

It is still so gory, still macabre, and riddled with foul play

Afro hair is threatening, because it is a crown

Climates work around you when your skin colour is brown

Stereotypes are formed from how the medics treat our genes

Today we celebrate the truth and give praise to our queens

So, please, never forget the efforts of our unsung heroines

“Slavery created a space where white people could witness the most horrific acts of sheer brutality and viciousness against other humans, whilst still going to church and kissing their children goodnight.” – Deirdre Cooper Owens

Written By: Alice Ajani is a freelance writer from Liverpool, England, who goes by her alias, Altherhythm (pronounced Al-The-Rhythm). She is a determined pathfinder, with a love for authentic travel and adventure. Stay connected with Alice on Instagram

Header Image: “J. Marion Sims: Gynecological Surgeon,” from “The History of Medicine,” by Robert Thom, circa 1952. Archived at the University of Michigan. All 45 images available on Imgur. Shown is the enslaved woman Anarcha