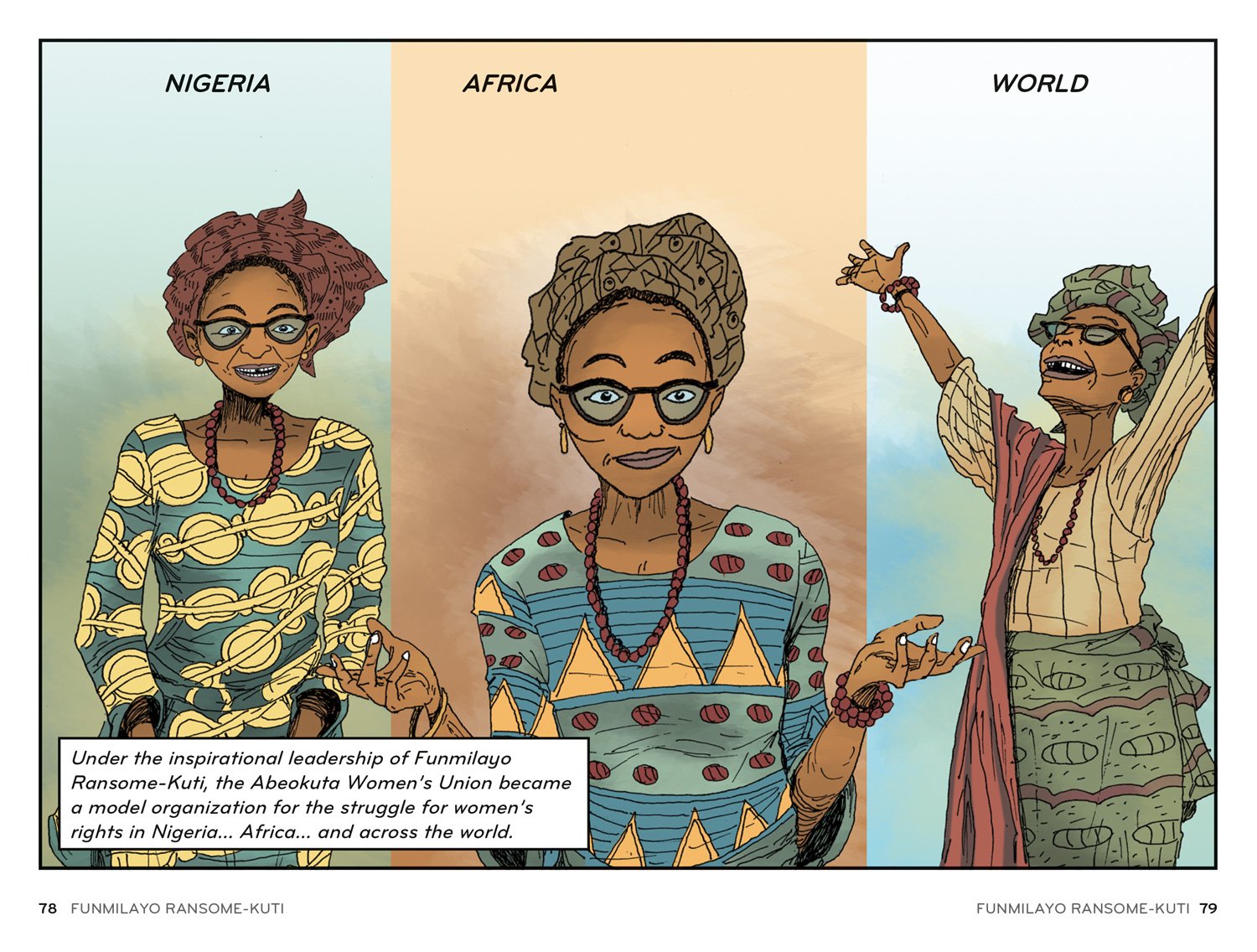 In the first half of the 20th century, Funmilayo Ransome-Kuti was instrumental to Nigeria’s achievements in realising independence and institutionalising proper constitutions, human rights, law and order, and democracy. As an anti-imperialist, pan-Africanist, feminist and political leader, Funmilayo challenged the status quo and incited massive numbers of African women – across social classes – to resist European imperialism at the local, national and international levels.

Born Frances Olufunmilayo Abigail Thomas on 25th October 1900, in Abeokuta, Egbaland, Funmilayo Ransome Kuti grew up during the times of the consolidation of British imperial administration in Nigeria. She was one of the first girls to be enrolled in Abeokuta Grammar School for post-primary education before going on to England to pursue her education. After her return in 1922, she became a teacher, dropped her Christian names -Frances and Abigail – and preferred to speak Yoruba.

Throughout her career, she was known as an educator and an activist. In 1932, together with her sister-in-law, Eniola Soyinka, she organised the Abeokuta Ladies Club (ALC) which was initially a civic group of educated Christian women. The Club gradually became political and feminist in its orientation when they organised literacy classes for women in 1940 and admitted market women who were illiterate and being exploited by the colonial and local governments. The ALC later changed its name to the Abeokuta Women’s Union (AWU) in 1942 and formally opened its membership to all women in Abeokuta. With the organisation, Mrs Ransome-Kuti launched into public consciousness when she led large demonstrations in 1949 against unfair taxes and price controls. The women protested against the local authorities, especially the Alake (1) of Egbaland at the time – Oba Samuel Ladapo Ademola II. She was able to present documents alleging abuse of power by the Alake, who had had the right to collect taxes granted to him by the British Government. This protest led to him temporarily abdicating his throne and the separate levies for women were successfully abolished.

The Abeokuta Women’s Union became a political organisation helping to raise the quality of life for women in the area whilst eradicating illiteracy. It challenged both colonial and patriarchal rule, starting with their resistance and refusal to pay taxes they thought to be unfair. Over time, the AWU later became a national organisation, renaming itself the Nigerian Women’s Union (NWU) in 1949 and the Federation of Nigerian Women’s Societies (FNWS) in 1953. By this point, the society had amassed a membership of an estimated 20,000 women. The FNWS campaigned for women’s political inclusion, women’s right to vote and improved educational opportunities. In 1953, the Federation of Nigerian Women Societies allied with the Women’s International Democratic Federation where Ransome-Kuti was elected as vice-president.

Her commitment to cooperation, solidarity and unity, among women, led her to play an active role in politics, especially in the pre-independence era.

Chief Funmilayo Ransome-Kuti was the only female member of the 1947 delegation to London to protest the Richard’s Constitution, a charter that threatened political unification of the different regions in the country. Her staunch belief in gender equality made her very involved in fighting for women’s right to vote in Nigeria, and she went on to become one of the few women to be an Oloye (2) in the Western House of Chiefs. She was involved in founding a national political party – the National Council of Nigeria and the Cameroons (NCNC) in 1944. In 1951, she ran, unsuccessfully, for the regional assembly under the NCNC. She contested again in 1959 as an independent candidate, as the NCNC had rejected her bid, but unfortunately was again unsuccessful. This move ended up splitting NCNC votes in the 1959 election, thus, ensuring that the opposition won. As a result, she was later expelled from the party and went on to form her own faction – The Commoner’s People’s Party, which disbanded a year later.

Chief Funmilayo Ransome-Kuti was well-travelled, having links with women’s strategic groups across Africa, including Algeria and Ghana. She also gave public lectures on women’s rights and the state of Nigerian women. In 1965, she was honoured with membership to the Order of the Niger. She also received an honorary doctorate in Law from the University of Ibadan in 1968. She was the first Nigerian representative at the Union of Soviet Socialist Republics (USSR) and was awarded the Lenin Peace Prize in 1970.

‘The Lioness of Lisabi’, as she was often referred to, died in 1978, from injuries she had gotten the previous year. Under a repressive military government, about a thousand soldiers stormed her family’s home in Lagos, which her son, Fela Kuti, had made into a commune called the Kalakuta Republic.

Ransome-Kuti functioned as collateral damage in the government’s fight against her activist son, Fela, as she was thrown out of a second-story window. The event has been tagged by some historians as the ‘Kalakuta War’.

Unfortunately, the true extent of Chief Funmilayo Ransome-Kuti remains untaught in most Nigerian schools, with her story going largely unknown. Instead, she is merely reduced to the record of being the first woman to drive a car (in Nigeria) – a relatively inconsequential thing compared to all she did.  It is unfortunate that there is a tendency to downplay the historical contributions of African women and female narratives are not adequately covered in the educational curriculum. Ransome-Kuti’s contribution to Nigeria’s independence movement is irrefutable, and her legacy spreads out across the continent.

Written By: Mariam Adetona – a final year medical student and mental health advocate. She writes across genres and her recent short story has been published in the Rage Anthology. Her satirical piece has also been long-listed for the Punocracy Prize for Satire 2020. She runs a literary outfit ‘The Shade Book Club’ in Ilorin, Nigeria, and believes in the restorative powers of ice-cream and chocolate chip cookies.