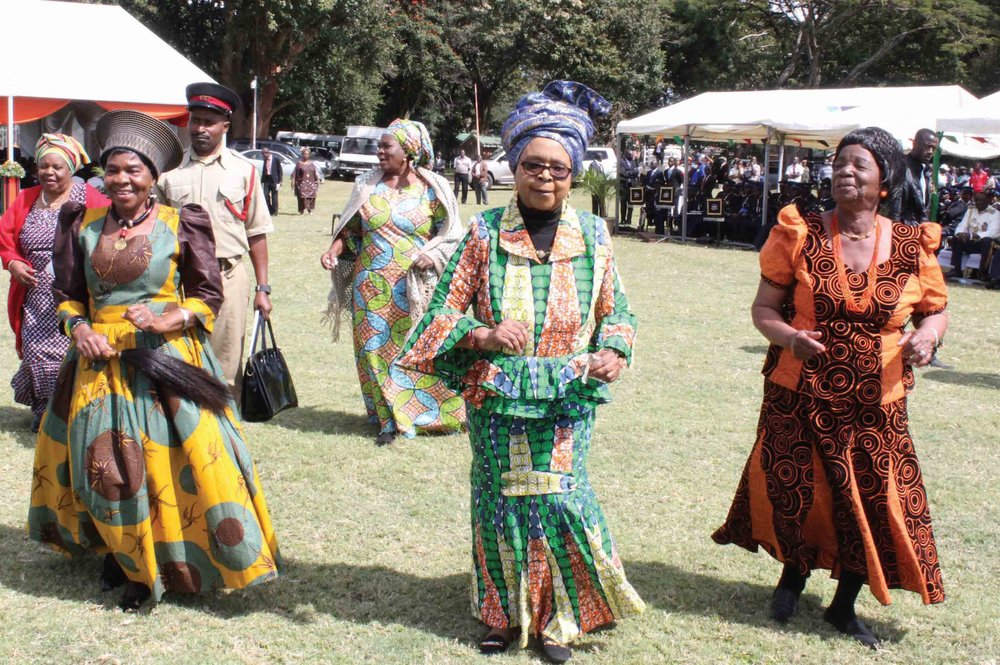 Historical records would have you believe only men in their youth have done anything worthwhile in the past. Some historians speculate whether the history of world events is complete with one half of a population excluded. ‘We can agree, to begin with, that traditional history obscured, neglected, and distorted the historical record and experience of half the world’s population,’ Gerda Lerner writes in her 1988 research paper. We truly conceptualise history as HIS-story, which speaks to the widespread subjugation of female concerns throughout history and across cultures.

I am also a graduate of an education system that follows this world model of historical pedagogy. As a result, I have had misconceptions about Zambian history. I did not know just how brainwashed I was until I started talking to older relatives who were alive during the independence struggle in Zambia, then Northern Rhodesia, and the newly birthed nation of Zambia during the 1960s and 1970s. During a light family moment, I asked my mother if she had ever encountered blatant sexism or discrimination in her 40-year nursing career. My mother recounted her third pregnancy ordeal at the labour office department in the Ministry of Health in 1982.

“I went to drop off my maternity leave papers at the labour office,” she said, “I found these two men who told me to wait outside while they took care of it for me.”

“I waited for hours. I knew that something was wrong because, during my two previous pregnancies, my leave was approved within a few minutes.”

My mother went on to describe how these two officers degraded her in front of strangers, asking her why she wanted paid-leave again so soon when she had received it in 1981, during her second pregnancy and birth.

They told her they could not give her what she wanted because she was a ‘repeat offender,’ as though her pregnancy was a crime. She left the labour office and vowed never to return.

A few days after this incident, a female relative who had heard of my mother’s ordeal told her she should go and see someone who had dealt with such cases before. This someone turned out to be Chibesa Kankasa, the then Minister of Women’s Affairs, a position she served in from 1969 to 1988. I was surprised to hear this, because as a recent student, I had only learned of Chibesa Kankasa as Mama Kankasa, with the moniker of ‘National Cook’ attached to her short section next to her husband’s achievements.

“She acted swiftly,” my mother recalls, “She personally went to the labour office and told off those officers, and my paid maternity leave was approved.”

The mining trade unions on the Copperbelt Province in the 1950s were the central point of the political organisation of Black Nationalists against British rule. This is how Chibesa Kankasa became involved in freedom fighting as a 19-year-old wife and young mother. The home of Chibesa and Timothy Kankasa became a meeting place, and Chibesa Kankasa always had food available for a hungry freedom fighter and the moniker National Cook was born. When she saw that she was being relegated to this position, Chibesa Kankasa asked for a more active role. Her request was granted. A few years later, Chibesa Kankasa who was visibly pregnant attended a rally with her husband and other Black nationalists. The colonial police were tipped off about the rally by an informant and they arrived earlier, leaving a box of ammunition at the site of the rally. Chibesa Kankasa did something brave when she arrived at the site, when she saw the box of ammo, she went and sat on it.

In an interview with the Zambian press decades later, Chibesa Kankasa said, “I was pregnant during those protests and when I sat on the box with the bullets, they wouldn’t touch me because even the colonial police had some measure of respect for pregnant women.”

After Zambia’s Independence, Chibesa Kankasa held some level of influence in both the ruling United National Independence Party (UNIP) and in her government role as Minister of Women’s Affairs. She was president of the UNIP Women’s League and, in 1972, she was appointed to the central committee of the UNIP. This was the highest decision-making organ of the ruling party at the time. One of her friends, Betty Chilongo Chilunga, credits the three months paid maternity leave clause in the Zambian constitution to Chibesa Kankasa.

“She really pushed women forward. She believed what a man can do she can do,” Mrs Chilunga said.

She was an honorary life matron for Planned Parenthood Association of Zambia. She lobbied the Zambian government to recognise International Women’s Day on March 8th as a public holiday. In 2002, she received the recognition that her male counterparts had been receiving, then third republican President Levy Mwanawasa bestowed her with The Order of the Eagle of Zambia: Second Division, the highest honour a citizen can receive. This makes me feel less like she has been cheated out of recognition. In a way, she received some flowers while she could still smell them.

Chibesa Kankasa mothered ten children in her lifetime and still fought for the dignity of other mothers and their children. She is a Zambia hero. In 2018, a few weeks before Zambia’s 54th Independence celebration, she suffered a stroke and was taken to a hospital in South Africa. On October 29th 2018, Chibesa Kankasa succumbed to the stroke’s damage. She is survived by her children, grandchildren and great-grandchildren.

Historical figures can be closer than we think. History books were, and still are, written by the ruling class. This elite stratum is rarely diverse. So, what are the solutions to this? I think we should be more invested in sponsoring marginalised people who want to get an education at the university level, especially in Humanities. This can be done by either donating to institutions that support culturally side-lined people (those invested in recording accurate history), lobbying for structural change and keeping the culture of oral history alive. This is because while recorded history might be distorted, oral history can fill in the gap.

Written By: Fiske is a Zambian writer of both non-fiction and fiction. She is a 2020 PenPen African Writers Resident

Header Image: Chibesa Kankasa in the middle, flanked by Chieftainess Nkomeshya of the Soli people and Betty Chilongo Chilunga, both notable freedom fighters and activists