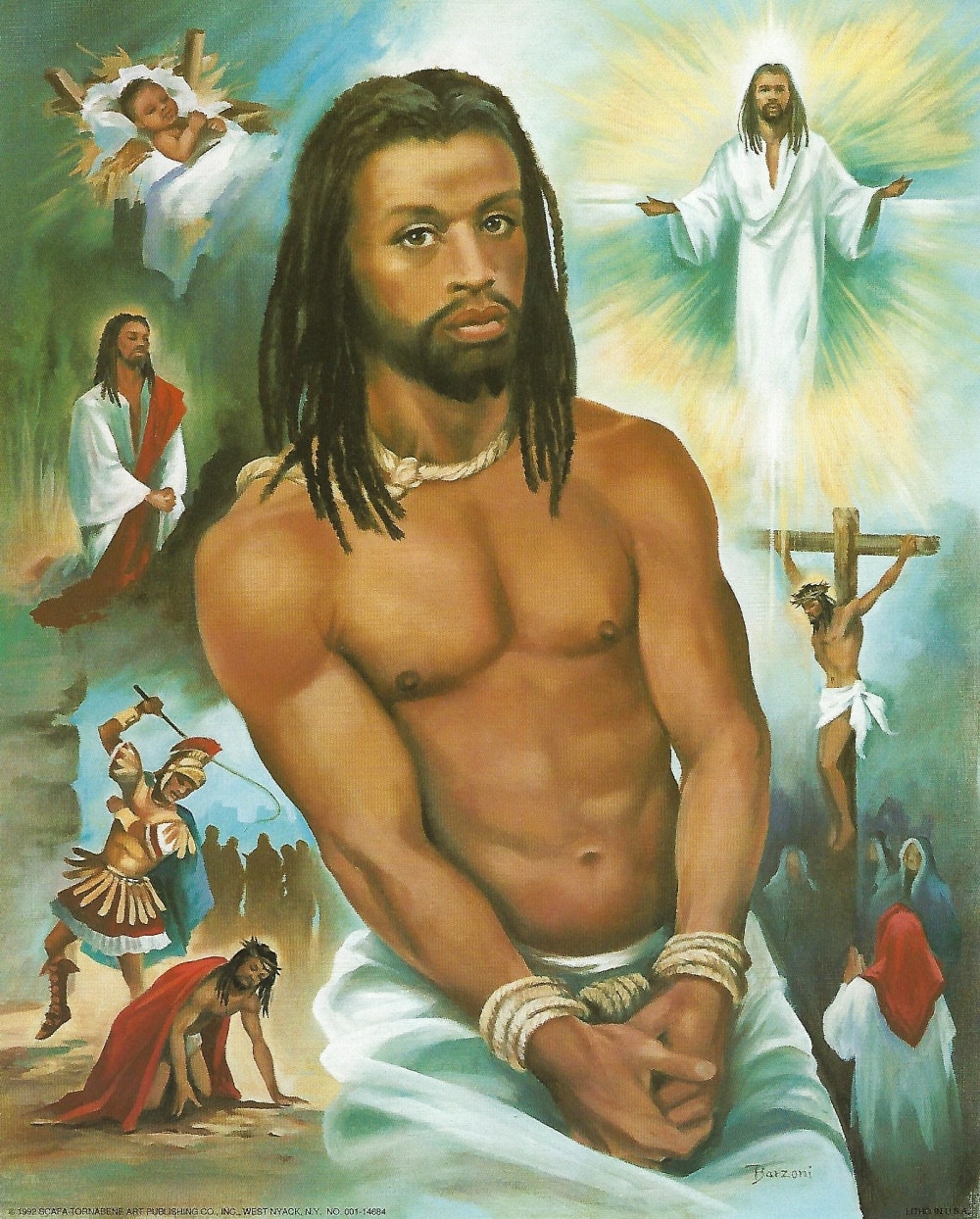 I know that the image of the white Jesus has caused much damage.

I know the rhetoric about worshipping the same God as my oppressors.

I know that from the 14th century onwards Christianity arrived with slave ships to the continent of Africa.

I know the accounts of slavery in the Bible.

Therefore, I explicitly acknowledge a problem.

My knowledge of Christianity is not tied to the white man. Even though jealous, fear-filled, racist, white, colonial beasts used Christianity as its weapon of mass destruction, it doesn’t mean that Christianity in and of itself is intrinsically destructive. Christianity was the tool used, in the same way that Islam is used by extremist now to incite terror.

I seek the political, social and financial advancement of Black people both in the diaspora and in Africa. I seek to spread the knowledge that Black is beautiful and Black is powerful. I seek to dismantle the pillars of misinformation that has washed the brains of Black people for centuries. I seek the redistribution of wealth and the re-establishment of African empires, African wealth and African education.

Me wanting the unification of Black people doesn’t mean I cannot also want salvation and a relationship with God.

Is Christianity a ‘white man’s religion’?

The eurocentrism of Christianity is problematic, however, it can’t be a white man’s religion because it wasn’t started by a white man! The image of the white Jesus is inaccurate. There was and still are no indigenous white people in Jerusalem. The image of the white Jesus we have now was painted by Leonardo da Vinci and commissioned by the Roman Empire/Catholic Church, some 13 centuries after Jesus, I don’t have to scream “agenda” for you to piece that together. The media and the Roman Catholic church have whitewashed the Bible and Christianity with white actors.

Christianity arrived in North Africa, in the 1st or early 2nd century AD. The Christian communities in North Africa were among the earliest in the world. Christianity was brought from Jerusalem to Alexandria on the Egyptian coast by Mark, one of the four evangelists, in 60 AD (Jesus died in 33 AD). This was around the same time or possibly before Christianity spread to Northern Europe.

The Ethiopian Eunuch, Philip in Acts chapter 8 was met by Philip, an apostle, who preached Christ. The eunuch professes belief in Jesus, becomes a Christian and gets baptised. The eunuch goes back to Ethiopia with that teaching and establishes one of the oldest churches in the world. Ethiopian Bible is the oldest and complete Bible on earth: Ancient Origine. Written in Ge’ez, an ancient language of Ethiopia, it’s nearly 800 years older than the King James Version and contains 81-88 books compared to 66.

The Jewish physical background of Jesus is important. Jesus came as the promised, prophesied Jewish Messiah. This would require Him to be physically Jewish, including features others would recognise as Jewish. The very first verse of the New Testament clearly proclaims the Jewish ethnicity of Jesus: “The book of the genealogy of Jesus Christ, the son of David, the son of Abraham” (Matthew 1:1).

Do we become less Christian by become more pro-Black and vice versa?

It is so aggravating that many bBack Christians are so religious that they think it’s preposterous to say “black is king”’ because, as they say “only Jesus is king”. They can’t see the positive affirmation in proclaiming the richness of their ethnicity and race, they think Jesus ceases to be King because we proclaimed black as king. Surely not? Surely they’re able to see that Jesus is the King of kings.

Some Black Christians would rather stay neutral in fake solidarity to Christianity than to say Black Lives Matter because an ignorant version of Christianity has been taught to them.

Yes, Jesus came to save all people, but in saving all people He spent more time and effort in reaching the downcast, forgotten, rejected and abused members of society. The same Jesus who taught the parable of the Lost Sheep, in which He instructed us to leave the 99 to go and look for the 1 who had been lost. The same principle in that parable is the message in the statement ‘black lives matter’.

It’s because of these Black Christians that people say, “Christians are brainwashed” and “we can never progress as a race because religion is holding us back as hostages”.

God’s sovereignty is not impeded and your Christianity is not wavering because you are standing for the political, social and economic advancement of your own people. You don’t become less of a Christian because you become more pro bBack. Black people who are championing our cause are not making an idol out of our Blackness. Anyone who actually thinks you can’t champion both the cause of Christ and the cause of Pan-Africanism, smell.

Does the Bible Condone Slavery?

I will always emphasise that large portions of the Bible are comprised of accounts of what has taken place. Therefore the Bible doesn’t only outline what is good and bad, it’s also an account of what was happening at the time, whether good or bad.

Yes, there is slavery in the Bible, but the first mention of slavery was that of God’s own chosen people to whom He calls Himself a husband and a Father. The Israelites enslaved each other also – so it couldn’t be a race thing only.

Leviticus 25:39 says “And if one of your brethren who dwells by you becomes poor, and sells himself to you,” indicates a person could becomes a slave through selling himself into slavery for labour/employment purposes.

I have no doubt that there were both good and bad slave owners but I do not think the way we see slavery now is how it was conducted in the Bible accounts.

Colosians 4:1 – ‘Masters, treat your slaves justly and fairly, knowing that you also have a Master in heaven’. There were high standards in the culture as it pertains to ‘acceptable’ ways to treat slaves.

Most modern forms of slavery are explicitly condemned in the Bible. The Western slave trade thrived upon the kidnapping of men, women, and children, such a practice is expressly prohibited in the Bible. “Whoever steals a man and sells him, and anyone found in possession of him, shall be put to death”. Exodus 21:16.

“If a man is found stealing one of his brothers of the people of Israel, and if he treats him as a slave or sells him, then that thief shall die. So you shall purge the evil from your midst”. Deuteronomy 24:7.

Because of this Biblical understanding of slavery, I can unequivocally denounce and separate the essence of Christianity from the atrocities and evil acts of those who used Christianity to perpetrate evil.

It’s a shame, I wish history wasn’t history, I wish Christianity wasn’t used as the weapon of destruction like it was, or is. Nonetheless it is unequivocally possible to be a Christian Pan-African, like me.

Written By: Chibuzor Tina Amadi. The Politics of the Kingdom of God. Chibuzor is a Mother, Disciple, Preacher, Educator, Author, Creative and a PanAfricanist. Connect with her on Instagram @Chibuzor_Tina and visit her website