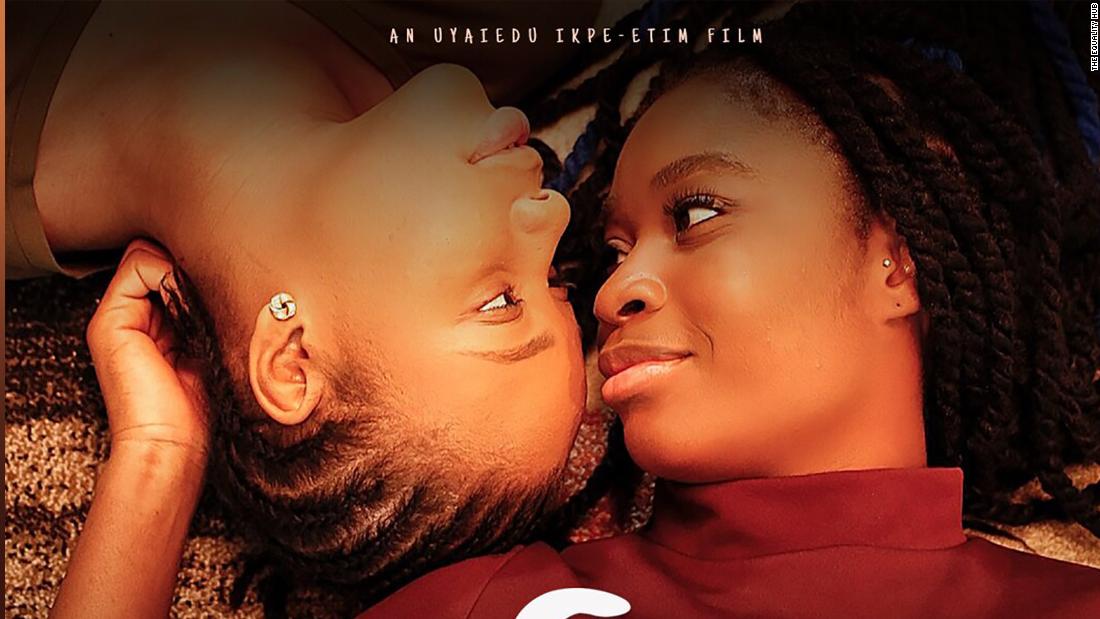 The new short film is a moving story about the delights and difficulties of human relationships.

Ife, which translates as “love” in Yoruba, follows the story of Ife and Adaora as they navigate their relationship.

The short film (35 minutes), written and directed by Uyaiedu Ikpe-Etim and produced in partnership with Pamela Adie and The Equality Hub, begins with the titular character, Ifé, preparing for a date. As she’s getting ready, a reggae-infused ballad plays in the background and the lyrics “How I wish Mama would not have to cry when she finds out my love is on the other side” cues audiences to the fact that the date is with another woman.

When Ifé opens her front door, on the other side she finds Adaora. Meeting for the first time in person, the two women are nervous and tentative with each other, and some light comedy ensues when Ifé serves Adaora her failed attempt at pepper soup and fried rice. But eventually they bond over their love of poetry, recite a Warsan Shire poem out loud, playfully bicker about whether listening to an audiobook is as good as reading, and open up emotionally to each other.

Needless to say that the one night date stretches into three intimate days. At one point Adaora asks, “Is it too soon to say I’m in love with you?” and Ifé, referring to the often joked about speed with which queer women fall in love replies, “We’re lesbians, this is the perfect time.”

“Ifé,” confined to just the three days of the date and the four walls of Ifé’s home, is a close-up study of queer women’s intimacy in Nigeria when it gets to exist, for just a moment, in a protected space, walled off from the outside world.

This is precisely what makes “Ifé” so moving. It’s impossible not to smile at the initial awkwardness or not to giggle innocently at Ifé’s nervous attempts to make Adaora feel comfortable. It’s also impossible not to feel your heart soften as the two women discuss their pasts and become slowly able to express their vulnerabilities.

The tightness of the framing, the deliberate pacing of the story, and the decision to limit the scenes to just a few rooms in Ifé’s apartment, in fact, often seems to invite viewers into the intimate space the two women share. Ikpe-Etim seems to dissolve the screen that divides the characters from the audience, and it feels as if we are being asked to come and share the passion (and pathos) of Ifé and Adaora, to tap into our own memories of innocently falling in love.

In bringing the characters and viewers into such close proximity, Ikpe-Etim also deftly avoids making the film feel voyeuristic. By focusing on the rawness of the characters’ emotions, the film eschews a sensationalised or sentimentalised drama. Although the film is made by and for queer Nigerian women, it is, at the end of the day, a film that is about the delights and difficulties of human relationships, a film that anyone should be able to relate to even if the exact circumstances might not match their own.

But because this film takes place in Nigeria, where the 2014 Same Sex Marriage Prohibition Act (SSMPA) has made it more difficult to be out, and because it is written and made by openly queer women who have been incredibly savvy about promoting the film via social media, the not-yet-released love story has drawn the attention of international news outlets.

The BBC, with a click-bait worthy title, recently reported that Adie and Ikpe-Etim “face the prospect of imprisonment if they ignore the stern warning of the authorities and proceed with the release of a movie about a lesbian relationship” and wrote that “the dramatic face-off with the regulators—the Nigerian Film and Video Censors Board (NFVCB) —is worthy of a film itself.”

The reality, however, is much tamer. Adie and Ikpe-Etim plan to exhibit the film at several international film festivals and then release the film on a streaming platform. They never intended to show the film in Nigerian theaters or on television and therefore do not need the NFVCB’s approval. Nor are they breaking any laws since there is nothing in the SSMPA that prohibits this type of film, Adie insisted when I spoke to her recently. The “face-off” that the BBC refers to seems to be largely manufactured by a press eager to sensationalise Nigerian homophobia, and Adie says that she has never even spoken with the NFVCB.

Despite the BBC’s comparison, the situation of “Ifé” is therefore very different than that of the Kenyan lesbian film ‘Rafiki’, which was banned by Kenya’s much stricter Kenyan Film Classification Board (KFCB) after supposedly altering its pre-approved ending and which was indeed aiming for a theatrical release in that country. (Though Nigeria’s anti-homosexuality laws are more stringent than Kenya’s, the NFVCB does not require film scripts to be pre-approved before a license to film is granted as does the KFCB).

Furthermore, international news outlets like the BBC seem to think that “Ifé” is pushing boundaries by showing two women being physically intimate with each other. In fact, CNN, referencing Adaora and Ifé’s declaration of love, writes, “These intimate scenes wouldn’t be out of place in a Hollywood movie, but in Nigeria’s film industry, Nollywood, they are near taboo.” Although “Ifé” is no doubt a ground-breaking film—a first in many respects—CNN’s statement is not at all true. As the article acknowledges, lesbians have been portrayed in Nollywood, southern Nigeria’s booming film industry, since the 2003 popular film ‘Emotional Crack’. On the heels of that film’s success, several dozen films depicted lesbian relationships, many of which contained erotic and intimate scenes. Emotional Crack treated lesbianism somewhat sympathetically, yet in all those that followed it,

the lesbian characters were depicted as predatory, motivated by money, or under the influence of cults or witchcraft, and ultimately either punished for their behaviours or “saved” by the church.

When Nollywood eventually turned its attention to stories about gay men, the scripts were determined by the same moral condemnation.

It is not the case, then, that queer intimacy is taboo in Nollywood. On the contrary, stories about queer characters are often quite popular, with A-list stars regularly taking on these roles and engaging in provocative on-screen same-sex intimacy and even occasionally speaking out against homophobia. In fact, at a time when many Nigerians and public officials would deny the existence of same-sex relations in Nigeria, Nollywood has been neither shy nor prude in its depiction of queerness. But, as many LGBTI activists in Nigeria have pointed out, that does not mean that these sensationalised depictions have been welcomed by the queer community or that they have been useful in fighting public perceptions of queer people as dangerous, a threat to society.

Acknowledging the power of stories, activists have begun making their own queer stories, stories that portray queer characters sympathetically in all their complexity and invite audiences to examine the ramifications of homophobia. In 2016, The Initiative for Equal Rights made the short film ‘Hell or High Water’, which garnered critical acclaim in Nigeria, and in 2018 they released ‘We Don’t Live Here Anymore’, which won five prizes at the Best of Nollywood Awards and proved that Nollywood films could indeed handle the topic of homosexuality sensitively (and still be approved by the NFVCB).

The Initiative for Equal Rights also has an online talk show, ‘Untold Facts’, a web series, ‘Everything in Between’, and most recently co-produced the adaptation of Jude Dibia’s novel ‘Walking with Shadows‘ with Funmi Iyanda. But Pamela Adie, founder of The Equality Hub who released her own autobiographical documentary about coming out as a lesbian last year, noticed that there was still a lack of queer-positive films that focused on women and that were told by queer women themselves. And this is where “Ifé” comes in.

Here, inside the walls of Ifé’s home, Ifé and Adaora share their past and imagine their futures. They cook, they drink wine, they make love, they cuddle. And they get to do so, unlike Kena and Ziki, the queer protagonists of Rafiki, in a room of their own, away from the gaze of nosey neighbours and the threats of violence. In a sense, “Ifé” is a cinema of what could be.

But intimacy is always complicated, and it’s uniquely complicated when one has to chose between loving a lover and being loved by one’s family. In her forthcoming book, ‘Knowing Women: Same-Sex Intimacy, Gender, and Identity in Postcolonial Ghana‘, anthropologist Serena Dankwa, understands “intimacy through the emotional rifts, the passions, and the fragilities engendering same-sex relationships that are inspired by both material and affective needs and desires.”

Though Dankwa’s book is about women both similar to and different from Ifé and Adaora, her description of intimacy as shot through with fragilities as well as passion helps to shed light on why this seemingly simple love story is really not that simple. Dankwa focuses her study on working class women in Ghana who practice same-sex intimacy but do not necessarily identify with terms like “lesbian,” “queer,” or “bisexual” that presume a legible and easily categorised sexual identity or coming out story. Intimacy, and what she calls “the vibrancy of everyday same-sex intimacies” spans a range of practices and exchanges that, as Dankwa argues, cannot always be captured in simple declarations of sexual identity.

I do not want to spoil “Ifé,” but one of the things that the films opens up is how these declarations of sexual identity (i.e. “we are lesbians”) do not always articulate the complexity of queer women’s lived reality. Indeed, as Dankwa’s work makes clear, sexual identity is often an over-simplified way of accounting for same-sex desires, especially outside of the West. And what “Ifé” beautifully dramatises is that the lives of its same-sex desiring protagonists are also full of other emotional attachments, attachments that hold sway beyond the protective enclosure of Ifé’s home.

“Ifé” makes its global debut at the ‘Inside Out Toronto LGBT Film Festival‘ that begins on October 1, 2020. Announcements about other festival screenings and streaming will be made on the film’s Instagram account, so follow @ife_movie to get updates.

And if you are interested in complex stories about queer Nigerian women, film does not have to be your only medium. You can read Chinelo Okparanta’s Under the Udala Trees, Unoma Azuah’s new memoir Embracing My Shadows, and the anthology She Called Me Woman, a book that sits prominently on Ifé’s bed.

Written By: Lindsey Green-Simms– is associate professor at American University, Washington, D.C. She is currently writing a monograph on queer African cinema.