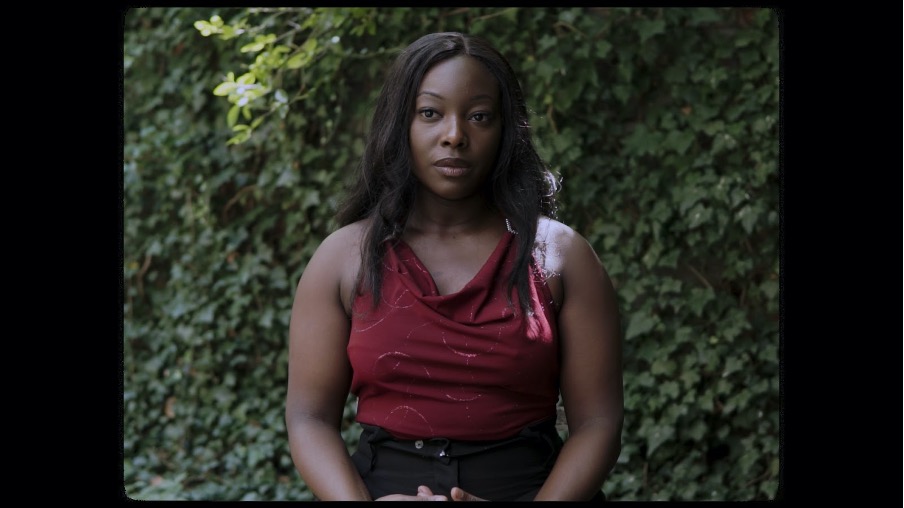 schwarz is a personal approach to contemporary black German experiences. Through locating the personal within wider society, it explores the multitude of meanings that are encompassed in the word black and the political identity Black. It discusses cultural belonging and heritage on a human, accessible and non-judgemental level. schwarz does not present a set of solutions or answers; it is an open conversation that does not explain nor justify. In the current German media and political landscape where panels contend to invite one (type of) black person and accept their opinions as a truth for a whole, extremely diverse group, schwarz pushes against these simplistic depictions of Black Life. Marginalised people deserve to be acknowledged in their complex individuality, rather than being subsumed into homogeneity.

In 2020, pandemic uncertainties made me move back into my mother’s home in Germany. I had been living abroad between the UK and Egypt for five years, where I’d found communities and built support systems. Nuremberg, my hometown in the conservative state of Bavaria, represented my childhood and confused teenage years; it was a place I loved but didn’t feel connected to as a Black Woman. When the Black Lives Matter protests took over America and the world, I felt lost and without a community to experience and welcome this moment in all its pain and possibility. My Nuremberg Self had never gotten the chance to explore Blackness; I had simply existed in a colour-ignorant vacuum alongside other black and mixed-race Germans.

Asking myself, “What does it mean to be Black and German?” required me to confront myself in this new-old context that I had escaped from years ago. In desperate need to speak with others about my grief and confusion, I invited childhood friends into my rose garden to discuss Black Life in Germany and how we felt about the unfolding BLM moment. We rented a microphone to record everything, and two friends filmed the process. I didn’t know what I expected to gain from this, but it felt important to initiate and document a Black conversation that could disrupt Nuremberg’s white silence.

“schwarz offers a glimpse into conversations amongst Black Germans from Nuremberg, Bavaria”

You may have heard of the 36 questions that lead to love test. I kind of came up with my own – 20 questions to make black people open up. Among them were: “Do you feel part of a Black community?“ and “What is it that makes us Black?“. After two afternoons of having my world view challenged as well as validated, we had recorded enough footage to create our documentary schwarz (black). schwarz offers a glimpse into conversations amongst Black Germans from Nuremberg, Bavaria. The film features 17 protagonists who speak about their preferred self-definitions, their experiences with everyday racism and the 2020 Black Lives Matter protests – do they feel represented and appreciated in German society?

Asking these questions to 17 people between the age of 16 and 31, I had two realisations: First, even though we were all racialised to be Black kids in Nuremberg and moved in overlapping circles, our observations of race and racism could not be more heterogeneous.

Black Life and self-perception are so multifaceted. Assuming that the individual voice of a person with a marginalised identity reflects back on the whole group is not only harmful in how we are portrayed to the world, it also distorts how we see each other and understand ourselves. When I was a student in London, I would answer questions about Black Germany with the utmost confidence; I am a Black German, so I know what it’s like. Our honest conversations taught me that my truths might not at all resonate with my neighbour’s, even though they might be Afro-German, too. These somewhat unsettling moments of realising that our experiences of Black Life in Germany are neither fixed nor necessarily analogous allowed us to rediscover belonging.

The film title, as well as the changing capitalisation of black and Black in this text, reflect this: some of the protagonists do not understand themselves as political bodies, and so we spell schwarz in lower-case letters, to avoid pushing a political identity on those who look black, but do not feel Black.

Second, community does not equal identity, and a shared identity does not promise community. adrienne maree brown, a self-proclaimed “scholar of belonging”, writes about this on her blog.

In her words: “community is a place to practice and participate in care, attention, knowing and being known, being protected, having room to make mistakes and still belong…not just allowed to be there, but be valuable… to heal.”

In other words: being black, or Black, is not enough to create a Black community. While having conversations about something we all understood to be our common and individual ‘identity’, we had to learn how to hold space for statements we utterly disagreed with. We recognised that there were many experiences which we still could not share.

After finishing the film, I hosted a screening with the protagonists and facilitated a group conversation that re-examined our thoughts from the rose garden. It was amazing to hear people rethink their answers and show interest in and compassion for those nuances of Blackness that are unique and still in need of discovery. In this final conversation, we cultivated respect, honesty, and care for each other.

“Nuremberg’s Black community was born out of the murders of George Floyd, Breonna Taylor, and so many more”

schwarz is a time document that shows the birth of a new community in Nuremberg. Now, a year later, these protagonists share spaces to sell their clothes and art, organise, perform and podcast together. Some of the protagonists are currently working on their own visual project around Black womanhood.

Nuremberg’s Black community was born out of the murders of George Floyd, Breonna Taylor, and so many more, along with the desperate need to connect and heal from it.  I could have never imagined how amazingly easy it was to communicate with other Black folks and how much support we were able to give each other. If you are a Black person in a small town somewhere, I invite you to reach out to others and create a space for conversation and resistance. It is much easier than you would imagine.

The film was screened at a German Film festival on 20 May 2021. Watch here

The short also forms part of the online ‘Fringe of Colour‘ Arts Festival, streaming from 1 – 15th August. Watch the trailer below and get your £5 concession pass here

We are currently submitting schwarz to film festivals around Europe and the world, but we are struggling to come up with the submission fees. If you would like to support our work and Black-centred narratives, please consider donating to our PayPal account: paypal.me/KandakaB, and make sure to let us know that this donation is for festival submissions in the message line.

All images: courtesy of Amuna Wagner.