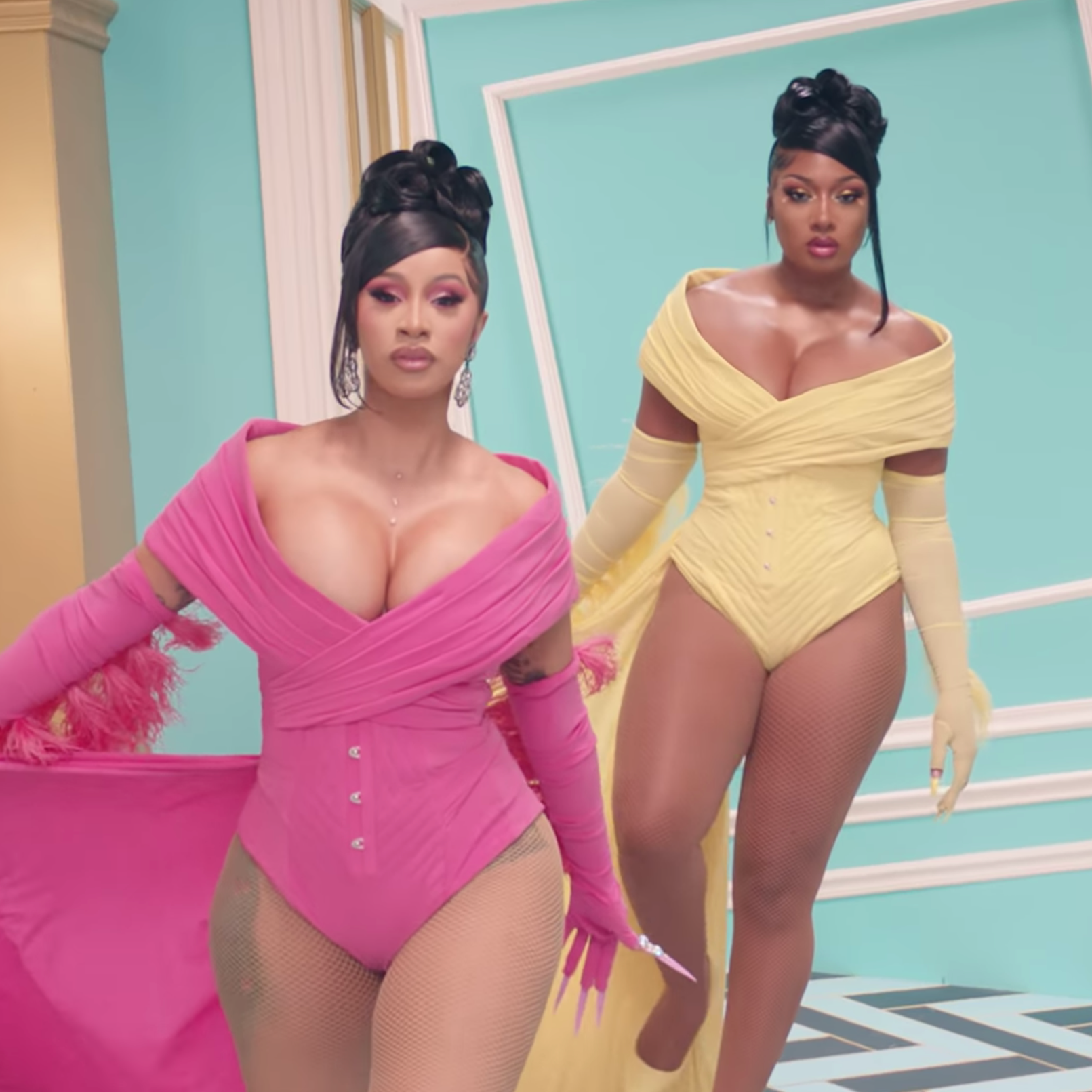 As the first female rap collaboration to ever debut at no. 1 in the 62-year-history of the Billboard Hot 100, the highly sexually charged song, along with its accompanying video, have inevitably caused a stir. Conversations surrounding the single have been polarising, in turn, dichotomising the song’s impact as either devastating or liberating for women. Republican politician, James P. Bradley, took to Twitter to proclaim that ‘Cardi B & Megan Thee Stallion are what happens when children are raised without God and without a strong father figure’ – a very loaded assessment of these two women of colour’s upbringing, which is clearly rooted in sexism and racism. This rings especially true when you consider that the leader of this commenter’s own party boasts about grabbing women ‘by the p*ssy’; his focus on morality should evidently be steered towards other avenues. Conversely, countless think-pieces have been released labelling WAP as a ‘Feminist Anthem‘, mapping out hyperbolically positive sentiments of ‘liberation’ and ‘agency’ onto this piece of media.

However, such takes which present every instance of overt female sexuality as empowerment often ignore the structural implications of these acts and the apparatus that causes them to occur.

WAP, which stands for ‘Wet Ass P*ssy’, demonstrates a particularly explicit, in your face, type of feminine eroticism which for some does, indeed, offer an element of emancipation against expectations of hypo-sexuality for women. Yet, as much as women are socially and culturally coerced into hypo-sexuality, women in western media often face the need to hyper-sexualise themselves in order to appeal to the male gaze and achieve optimal financial returns. The aforementioned success of WAP, which is also now the most streamed song during opening week in history, showcases this reality. In the context of black womanhood, evaluating these depictions becomes even more complex.

Pop-culture critic, Kimberly Foster, founder of the multi-digital platform For Harriet, exposed the dearth in variety of black female portrayals in music in this video. Going through the Billboard charts, she found that black female performers were much more likely to have songs and videos that were explicitly sexual. In contrast, female musicians of other races, especially white women who made up the bulk of chart representation, had much more diversity in their self-depictions. The latter group ranged from candidly raunchy, to sweet, demure and teenybopper pop. This black-white dichotomy is illustrated in the WAP video. Rosalina, a white woman, is dressed and acts significantly more reserved than the non-white women in the video. Even the other white woman Kylie, who is costumed in a similarly racy fashion to the women of colour, does not engage in the same level of physical labour to present as desirable. A viral tweet noted this disparity, contrasting Normani’s elaborate dance routine against Kylie Jenner’s undemanding walk down a hallway.

Palpably, black women are placed in a very narrow box which speaks to the hyper-sexualisation of both blackness and femininity, in society. Black women are, therefore, doubly fetishised due to their dual occupation in these spaces.

It is essential to have variety in our art because art enables us to plot the terrain for our social mores and possibilities. Black women are no more in tune with their physicality and this particular performance of sexuality than any other female demographic, yet the recurring mainstream presentations of us would suggest so. Aside from the video for WAP, we’ve had hits such as Consideration by Normani and Hot Girl Summer by Nicki Minaj and Megan Thee Stallion, among others, which also tap into this particular brand of allure, which has become the dominant means of chart success for black women in the industry. The issue is not that this imagery exists; it’s that we’re consuming so much of it with little to counterbalance.

It also becomes a matter of socio-economic coercion, as opposed to simply ‘choice’ when we contemplate reactions to art produced by female musicians which diverge from this industry norm. In an Instagram live, Cardi B stated that she raps about her ‘p*ssy because it seems like that’s what people wanna hear’. She went on to claim that when she released the much more conservative video to accompany the song Be Careful, she received a lukewarm and even hostile response. This came after failing to meet the supposed expectation of sexiness held by fans. Women are, therefore, steered towards certain choices when we are trying to optimise our chances of success, which, in the context of black women, are woefully few. Consequently, the development of black female identity is stunted and reduced to a singular possibility against a sea of deviating realities.

The aim of this discourse is not to police black women’s sexualities, which have already historically been subject to unwilful consumption and control, within the conditions of slavery, colonialism and the socio-cultural legacies that have persisted. Rather, it is to encourage critical consideration regarding the systematic pressure placed on black women, and other women, to overwhelmingly choose an over-sexed kind of self-rendering, in the mainstream. We do ourselves and our political understandings a disservice when we examine each and every instance of female sexuality under a one-dimensional lens of ‘reclamation’, without the adjoining view of coercion.

Written By: Hannah is an award-winning writer who is passionate about discussions centring black women and the nuances within this identity. Connect with her on Instagram and on her blog.

All Images: YouTube / via screenshot – music video for “WAP.”