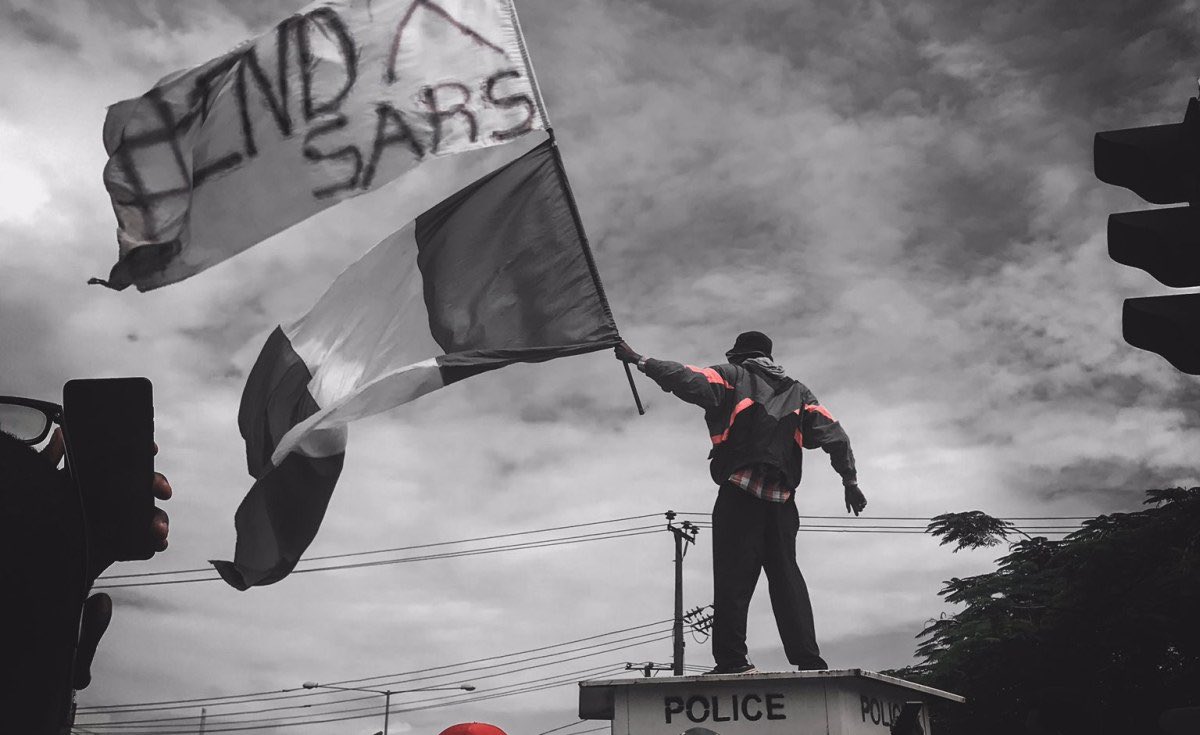 20.10.20 The Lekki Massacre: The #EndSARS Protests Ended Nothing

20.10.20 The Lekki Massacre: The #EndSARS Protests Ended Nothing

Exactly a year to this day, I sat at the edge of my bed back at home with tears streaming down my face as I watched – together with my younger sister – an IG live where unarmed people were trying to remove a bullet from the leg of a man who was shot. The location was Lekki tollgate in Lagos, and it was the 13th night of the #EndSARS protests.  The Nigerian government had ordered live ammunition to be fired to disperse unarmed protesters who had crowded to demonstrate at the tollgate. With many chanting the national anthem, others passing instructions on what to do, and a whole lot of background noise, I watched alongside approximately 140000 other people across the world the pixelated spectacle of blood streaming from this protester’s gunshot wound and a Nigerian flag being tied around the leg.

The #EndSARS protests which started on the 8th of October 2020, were a series of youth-led demonstrations across the country against the rogue police unit – Special Anti- Robbery Squad (SARS) which had been known for brutality, forced extortions and extrajudicial killings. Few days following the movements, the Nigerian government officially disbanded SARS and replaced it with the Special Weapon Tactical Team (SWAT). This action was deemed inadequate, and more people thronged the streets, defying even more police violence. It all came to a head on the 20th of October when demonstrators at the Lekki tollgate – were shot at by the Nigerian army who was sworn to protect them. Nothing the protesters did could stop the shooting, not even holding up the national flag or chanting the National anthem. The shooting left 12 people dead and many more injured. Several more were arrested, and thanks to the rotting justice system, quite a number are still in jail one year after.

What happened after was a series of attempts by the Nigerian government to convince Nigerians that nobody was shot at or killed. The Nigerian army denied the shooting while the government alleged the live video was doctored. It was not until a month after at a judicial panel, following investigative video footage released by CNN of the shootings, that the Nigerian army admitted to deploying personnel with live and blank ammunition to the toll gate.

One year on, and little has changed

In Nigeria, activism has been a prime strategy against injustice and was the major tool in overcoming colonialism, military dictatorship, and government-sanctioned violence at different points in its history. Leaders such as Funmilayo Ransome-Kuti and Margaret Ekpo who were at the forefront of anticolonialism laid the foundation of the culture of activism in Nigeria. However, this waned over time with government silencing of dissidents, government incompetence and oppression, and Nigerians lost interest in holding leaders accountable. However, the first few days of the #ENDSARS protests saw the reawakening of this spirit – especially amongst the youth – as Nigerian youth galvanised into action organising food, snacks, hospital transport and bills, legal fees and fundraising to sustain the protests. Unfortunately, this was short-lived.

One year after the series of protests across several states of the country, over 300 protesters from last year are still languishing in jails on trumped-up charges such as arson, illegal gathering and armed robbery.  The Nigerian justice system – which goes on incessant strikes – keeps them from getting the pardon and release they deserve. Parents are unable to get closure from the death of their children killed during the protests. Yet, profiling and extortion of young adults by uniformed agents of the state are on the rise. Over the past year, there have been over 100 reports of persons killed, brutalised and illegally detained by security agencies.  Despite the heavy toll of lives lost and psychological damage of the protests on the psyche of the average youth, there were little gains recorded.

A new terror in town

Although the rogue unit – SARS – were disbanded after the series of protests, brutality by the several security agencies is still the order of the day in Nigeria. It is now in the playbook of yet another government agency, this time the Economic and Financial Crimes Commission (EFCC). Officials from this agency have now taken to breaking into people’s homes, hotels and places of business, often at night and without search warrants, with guns aimed at individuals under the guise of ‘chasing after criminals’. Dorathy Bachor, an ex-BBN housemate reported on her Instagram account how she woke up in the middle of the night to find EFCC officials in her living room. They said they were looking for someone who ran into her estate. Earlier this year, their activity led directly to the death of a man who jumped from the 7th floor of a storey building while EFCC raided the estate he was in. There are also other reports of EFCC officials forcing their way into people’s homes, clubs, or disrupting night parties to batter up and bully people they think are internet fraudsters.

There is little being done to stop them because there’s little that can be done. It does not help that the commission has the full backing of the government and defends the actions of its operatives.

Shortly after the #ENDSARS protests, the administration went full-blown into authoritarian, dictator mode. From the presidency threatening citizens in a Twitter thread – which was massively reported and subsequently removed by Twitter, to information and culture minister, Lai Mohammed, announcing a Twitter ban in response, claiming that Nigerians were using Twitter for activities “capable of undermining Nigeria’s corporate existence”. Although he did not say explicitly what was meant by ‘corporate existence’, it was obvious that he was referring to the use of Twitter in mobilizing the #EndSARS protests. As usual, the socioeconomic impact of the ban was not a factor in making the decision.

Additionally, Fintech start-up’s, most of which are run by young Nigerians are being slapped either with increased taxations, freezing their bank accounts, or one fine or the other. This is not surprising as many of these start-up’s participated in fundraising and as payment gateways for the protests last year.

There is a straight line from the events of 20:10:20 to the increased migration of people outside of the country. With many using a screenshot from King of Boys saying ‘welcome to a new dispensation’, a significant number of people have been announcing their arrival in other countries where they have either gone to study or work – an attempt at escaping Nigeria. Warsan Shire captured the situation best when she wrote “Nobody leaves home unless home is the mouth of a shark”.

In fact, one of the hallmarks of success is how much you have saved to facilitate your migration journey. This migration shift is increasingly being apparent in the Nigerian healthcare sector as the doctors and nurses move out of the country shrinking the available workers in an already strained sector. The topmost destination is often the UK, and Nigerians currently make up one of the most common nationalities of NHS staff.  Even specialists are not spared, with Saudi Arabia actively recruiting consultants from Nigeria.

Susan Sontag, in her last published book, said “All memory is individual, unreproducible – it dies with each person. What is called collective memory is not a remembering but a stipulating: that this is important, and this is the story about how it happened, with the pictures that lock the story in our minds.” The Nigerian government capitalizes on forgetfulness, which is not surprising because Nigerians quickly adapt to unfavourable – often with humour and move on whenever anything happens. This is what earned us the happiest people on earth tag at one point. However, the stipulation this time around is remembrance. Memorials are being organised in various states for the fallen souls of #EndSARS protests, and pictures from the protests are being re-shared across Twitter and Instagram.

Even though Nigeria is still on the precipice of a failed state with numerous internal conflicts in all regions, carrying the banner of the poverty capital of the world, and the shrinking middle class, we are not allowing the government’s attempt at gaslighting the whole nation to take root.

I still find it very hard to confront my memories from that night. I have subconsciously made it into an abstract of numbers 20:10:20, and it is that abstract I call upon when any reference is made to it. Just the numbers, not the bloodied flag, not the people chanting the national anthem, not the pixelated video of a body fighting to stay alive. It was easily the most traumatic sight I have ever witnessed but tomorrow — we march, and we remember.