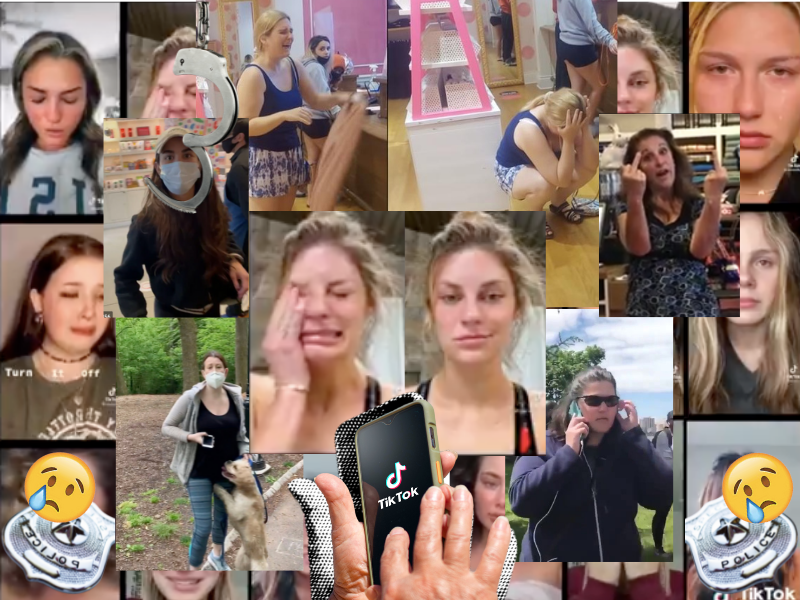 Crying is a human action, one that is triggered by a wide range of emotions including sadness, rage and grief. However, in the context of white femininity, crying can become a high-stakes performance.

There is a recent Tiktok trend built around white Women crying and revealing a straight poker face, to show how good they are at pretending. The trend initially started in June and is known as the ‘Turn it off Challenge’. Though it started out as an acting trend, the dynamics of race beyond the app caused it to become problematic.

The trend is particularly eerie. Specifically, the girls in these videos appear to sob, but when the audio declaring “Turn it off’ plays, the tears stop and their faces morph into indifference or into unsettling smiles.

I see these videos as extremely harmful as they downplay the violent consequences white women’s tears have had throughout history. White women crying can be powerful in a usually destructive sense. These tears can be dangerous because they are not simply performing vulnerability or discomfort, but distress. That is, their distress signals garner social responses that can incriminate, murder and manipulate.

Throughout history, Black men have been painted as aggressors by default, viewed as a threat before situations are assessed. As a result, when white Women cry wolf, those they target are often harmed due to fear and race-based stereotypes.

And the crocodile tears launched by white Women are not just offensive; they have life or death consequences. Historically, in America, Black men wrongly accused of rape by white Women have faced lynching or imprisonment. This is evident in cases like the Central Park Five in1989.

These teardrops and meltdowns have life-threatening consequences. For instance, Emmett Till faced extensive torture and was murdered in 1955 when a white woman, Carolyn Bryant, falsely accused him of whistling, grabbing and making sexual advances towards her. He was only 14 years old and was lynched in a horrific way.

It didn’t matter that he was innocent, her distress and accusation cost him his life. However, beyond people’s phone screens, white Women’s distress is still causing immense harm and violence towards the socially marginalised, especially Black men and Women.

The violent potential of white women’s tears is not simply a remnant of the past. In fact, the white damsel in distress can still cause intense harm today, whether her tears are legitimate or not.

A video recently went viral of an interaction between Ijeoma Ukenta, and African American Woman and Abigail Elphick, a white Woman at a New Jersey Victoria’s Secret store. Ijeoma recorded Abigail appearing to strike at her. After recognising that she was being recorded, her meltdown began, she started crying, begging to stop being filmed, and after stalking Ijeoma around the store, she attempted to call the police.

The prevalence of white Women in distress goes beyond the digital space and translate into everyday experiences, in cases such as Sarah Page, Fannie Taylor, Eleanor Strubing, Victoria Price and Ruby Bates. This means that for African Americans, white Women’s feigned distress triggers a deep historical memory of trauma and injustice.

One Black person falsely accused, can cause a domino effect, sending ripples of white violence throughout communities. For example, in 1923, when a Black man was accused of attacking a white woman, armed white people terrorised the community of Rosewood, Florida.

On record, there was a death toll of eight people, and it is estimated that over two hundred people were lost to the violent siege. Events like these prove that white women’s fake tears cannot neatly translate into harmless fun.

The film industry capitalises on the dramatic potential of white Women’s tears too, in order to profit from images of Black trauma.

An upcoming film, Karen embodies this sensationalism. Directed by Coke Daniels, its plot revolves around the social dynamics of how entitled white Women can feed into Black pain. It has the typical plot arc of the nosy white female, who harasses her Black neighbours, a trope repeated over and over again.

Watching the movie trailer is uncomfortable but not in a daring way, its predictability proves uninspiring. It reads as a series of racist confrontations with no depth or conclusion.

This issue of white fragility leaking into interpersonal relationships on screen is also seen in recent Amazon Prime series ‘Them’. This series is similar to the upcoming Karen film as it follows Black people moving into a racist neighbourhood. Similar to the film, it is centred on a series of racist attacks and encounters and the storytelling is embedded in gratuitous depictions of racism.

White women participating in the trend online display the lack of critical self-awareness that many white people display as a result of their social privileges. White women’s ability to act and perform fear or distress will never be neutral in a society where suspicion towards Black bodies can result in death.

Overall, the tone-deaf proliferation of these images and videos exposes the reality that Black pain is still not taken seriously. Though the summer of 2020 presented an opportunity for white people to reflect on racism, it appears that the nuance of privilege is yet to be addressed. White Women’s tears are a political act and TikTok proves that many of them have not reckoned with that responsibility yet.