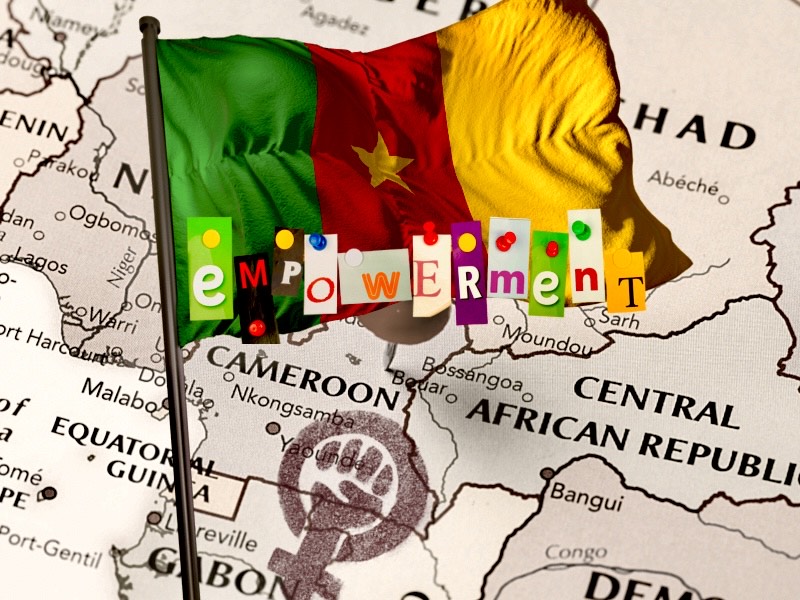 At just 18 years-old, Liz Lum is making waves as one of Cameroon’s most outspoken young feminist advocates. Her accolades range from involvement in the UN Women’s Generation Equality Group; board membership for COMAGEND (Common Action for Gender Development) Cameroon; a nomination for the International Children’s Peace Prize and more.

For someone who’s achieved so much at such a young age, what struck me most in meeting Liz was her exuberance, grace and humility. Anyone unfamiliar with her work would think she’s just an average African teen, complete with French-tip acrylics and a fresh head of micro braids. Having introduced herself to me as “just a normal African girl who is tired of being regarded as just a girl and tired of having her actions judged differently because she’s female…” it’s clear that Liz doesn’t see herself in a particularly exceptional light either. A shock because the eloquence and fervour with which she defends her cause is nothing short of exceptional.

The first time she bit her tongue in the face of gendered injustice, Liz was ten years-old and in the final year of primary school. She remembers her friend and classmate, Fatou, as a “maths genius” and the catalyst to her advocacy work. Fatou’s mother was a petty trader who would pass by the school sometimes on her way to sell, where she would pull Fatou to say hi, before getting on with the days’ work. Liz often went along to greet her friend’s mother but because she didn’t speak their native language, she would ask her friend what she and her mother spoke about. After one conversation Liz noticed Fatou seemed down so she asked her what was up.

Fatou told me no, she didn’t want to go with her mum, she was scared. I then found myself thinking, what can I do?”

“She told me her mum said that after she finishes the last year of primary school, she is going to get married.” Liz said. “I was quite confused.” She continued, “I mean, we hadn’t even grown breasts yet and her mum was saying she had to go and get married. I found this perturbing because I was always very outspoken, so if anything struck me as bad or dangerous, I would make sure I said something. But I wondered how I would talk to her mum. Fatou told me no, she didn’t want to go with her mum, she was scared. I then found myself thinking, what can I do?”

Unable to communicate with Fatou’s mother, Liz spoke to her own mum about her friend’s predicament. “My mum saw the potential in me, she saw how driven I was, and she made sure that I transformed all that fire into something meaningful. It was then that she started taking me to all the girl programmes that existed around so that I had the vocabulary to explain exactly why we needed to eradicate these archaic practices”.

As an origin story it’s more bitter than sweet and the regret is palpable in Liz’s voice as she retells it; “I feel somewhat disappointed because to this day, I don’t know where my friend is. It’s been seven years I’ve been looking for her and I’m just so scared. What if she got married already? What if she’s suffering domestic violence? What if she gave birth and died in child pregnancy? I just feel like I failed her because I didn’t stop what her mum wanted to do… it’s been keeping me going. I need to make sure that no other girl falls into that kind of situation. I need to make sure that every girl has a choice.”

“I decided I wanted that summer holiday to be different…I didn’t want to resume school and see that my friends weren’t at school because they got pregnant.”

A few years later she began to do just that, launching her first ever activist initiative; “We called it Holidays Free of Unwanted Pregnancy and Abortion” she said, before going on to explain how the lack of sex education and exposure to contraceptives in Cameroon (as well as much of West Africa) means that the holidays are often defined by “High rates of pregnancy and high rates of abortion.” “I decided I wanted that summer holiday to be different…I didn’t want to resume school and see that my friends weren’t at school because they got pregnant.” She said. The campaign was designed to target the market, a hub for socialising as well as commerce.

She said, despite having worked with lots of exciting and prestigious organisations since, nothing has quite replicated the buzz of that first project; “It was so exciting, but it was also very challenging… I cried tears of joy at some of the feedback we received, mostly from mothers who were very appreciative of the awareness we were raising. Some fathers were angry, like ‘what are you doing here, you should be in the house, learning how to cook’… I remember thinking, wow is this how it’s going to be? My very first real-life experience in the field, talking to rural communities… telling people about women’s liberation. Talking to men who were like patriarchy kings. It was so, so difficult. And I was just 13.”

Today, she juggles her passion for on-the-ground activism with her undergraduate degree in IT and her various commitments with national and international advocacy groups. As part of the Global Fund for Women’s youth advisory board, she reviews grant applications, ensuring that money goes to work that’s truly impactful to the lives of African girls. She speaks at events in Cameroon and beyond, empowering others like her to better wield their voices. With all that under her belt, she admitted she still suffers from bouts of imposter syndrome from time to time, particularly in the spaces where she is one of very few young Black Women.

“When it comes to adapting to discrimination that I face because of my age, I tend to be very emotional.” she admitted. “But now I’ve learned to make sure that I don’t leave anywhere without actually making my point… After I’ve gotten what I want or I’ve gained access to the space I was aiming for, then I let people know which parts of the process I did not like and the ways I’d like to see things improved. Trust me, it doesn’t always go smoothly.”

She believes that adolescent girls and young women are the most overlooked instruments of change and that improving conditions for them, especially in countries like Cameroon, is a most urgent frontier for change. Any resistance she’s met with is insignificant in her pursuit of gender equality. She’s happy to tackle adversity head on, to be an example for the generations of girls to come.

Written By: Memuna Konteh – a London-based, Sierra Leonean writer with special interest in the intersections of identity, culture and politics. Follow her on Instagram and Twitter