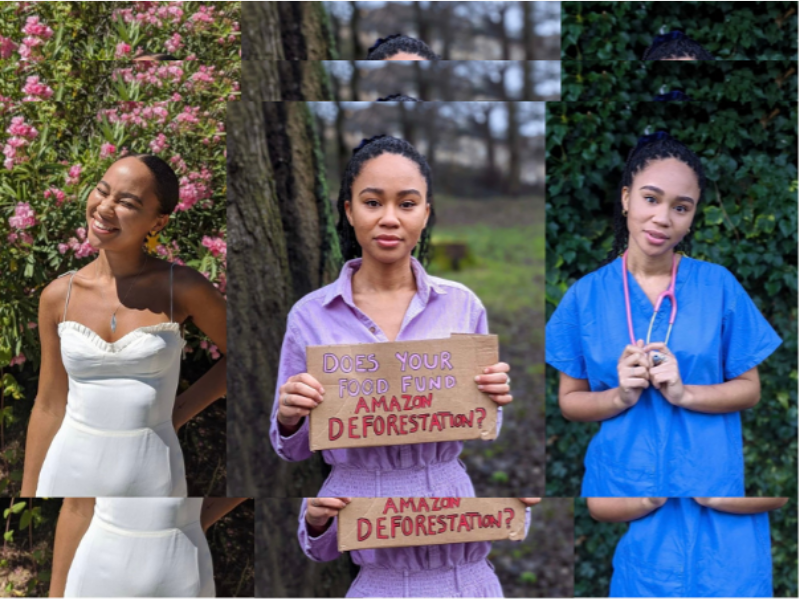 Mikaela Loach is a medical student at The University of Edinburgh, a content creator and a climate justice advocate. Her work is aimed at democratising climate jargon and making the environmentalism movement more accessible for non-White people. Historically, the climate justice movement has oftentimes reduced movements to selected heroes, who are often White. I had a conversation with her over zoom to gain an insight, intrigued by her journey and the ideas that have shaped her work in activism and beyond.

We started our virtual chat by catching up on each other’s recent pandemic happenings. She told me about how she has to wear many different hats during the week, switching between medical student tasks and her advocacy and activism work. She tells me she feels that she lives a ‘Hannah Montana’ lifestyle, constantly having to swap the stethoscope for the placard!  After this iconic anecdote and general chit chat, we began an expansive conversation about corporate responsibility, whitewashed activism and multifaceted movements.

The existential threat of the climate crisis generates the necessary demand for the very social organising that Mikaela is so passionate about. In three words, Mikeala describes Earth’s climate crisis as “Extractive, Capitalism and Racist.”

The tension between individual lifestyle choices and institutional policies is a key issue that often dominates the conversation about the climate emergency. Although the energy sector generates 73% of total emissions worldwide, the focus is often on individual people’s consumption. These narratives are individualistic by emphasising the ‘footprint’ individuals contribute to global emissions, rather than the tonnes of emissions produced by energy giants.

And energy giants have been exploiting the environments for centuries. This has been exposed in prominent cases like the water poisoning in Michigan, U.S.A. The water crisis in the city of Flint, Michigan, came to public awareness in 2014, when residents faced poisoned water supplies in their communities.

According to the EPA, automobile manufacturer, General Motors, had been dumping about ten million tonnes of waste into the Flint river per day since the 1960s. This city’s crisis is just one case exposing the way corporate neglect devastates communities.

EarthDay was established in 1970, in the wake of air pollution  and growing awareness of unsustainable environmental practices.

Though the day is a significant reminder about the need to protect the planet, it also reflects Western biases surrounding how to approach climate justice.

I asked Mikeala what she thought about the whitewashed history of global climate justice. She highlighted the influence of education and the media, saying, “Climate justice appears whitewashed only because of media portrayals. For instance, people indigenous to the Amazonian forest. We owe indigenous people a lot of respect and credit for their protection of their communities. They’re not posting Instagram infographics. Even the publicity I get shows the selectivity of who is held up and represented in activist spaces, I try to uplift other people when I can. I’m trying to act on an awareness of the privileges that contribute to my platform.”

The climate justice space may need to be rebranded in order to become intersectional. As a social justice sector, it is undeniably dominated by white activist legacies. This plays out in the contemporary, where certain activist voices are amplified more than others. Last year, a news agency cropped a young Black climate activist out of a group photo with Greta Thunberg. Events like these expose the biases that erase non-white climate activism.

Mikaela believes platforms must check their biases, saying: “The media plays a huge role in the construction of narratives. If people don’t understand what’s going on they can’t get behind a movement.

One thing that needs to change is the assumption that racial justice is separate from climate change and it’s not.

Would companies have let unsustainable practices continue if it was going to let white people suffer the consequences of the exploitation? There’s a lot to think about.”

Activism is a complex beast, in an age where social justice is as accessible as online petitions or eye-catching Instagram infographics. The prerequisites of meaningful activism include sustainable solutions, community building and organising. This collective ambition must be demonstrated consistently, before movements gain momentum. Activism is active acts – traction is only maintained, when the ideals are commonly shared, believed and practised.

Nevertheless, Mikeala believes that movements for social change are multifaceted with different people offering different contributions, “I’d really like people to understand that they are essential to movements.

Movements are made up of loads of different people with different skills.

I hope we can mobilise people into mass movements for change. They don’t need to understand all the lingo.”

But Mikaela hopes to overcome these barriers to climate justice, with educational platforms like her podcast, The Yikes Podcast. She explains: “There’s a lot of gatekeeping that happens, especially with technical language. On the podcast, we try to define terms and have open conversations. In Season 3 we are trying to imagine liberated futures. I hope they’ll sit with the information and act.”

Like many of us during the pandemic, Mikaela has also been processing the chaotic news cycles and social issues of these times. As an activist and busy student, she shared the ways she navigates this, saying: “One thing that has been really helping me is having offline weekends. Relieving myself of having to reply to messages or posts- not having to be online in work mode. Having weekends off helps, allowing myself to just not do stuff. Actually doing things that aren’t necessarily related to learning or work.”

I’ve learnt so much from speaking to Mikaela. Her hope is that environmentalism will become democratised and opened up- beyond Western narratives. Before we spoke, I was inspired to see environmentalism in a different light. I have been educated to see sustainability and climate justice as a concept relevant to me outside of white people telling me why I NEED to be vegan or why I must use metal straws.

Her Instagram content is a vibrant space full of reels, videos and stories that strike a balance between humour, education and critique. I especially enjoy her co-hosted podcast, The Yikes Podcast, which delves into issues like the refugee crisis and ecofascism. Most of all, I appreciated the vision of hope Mikaela chooses to invest in. As an environmentalist, she dares to imagine less exploitative futures. In tough times, being able to imagine better systems is a bold foundation on which global justice can be built.

All images courtesy of Mikaela Loach.