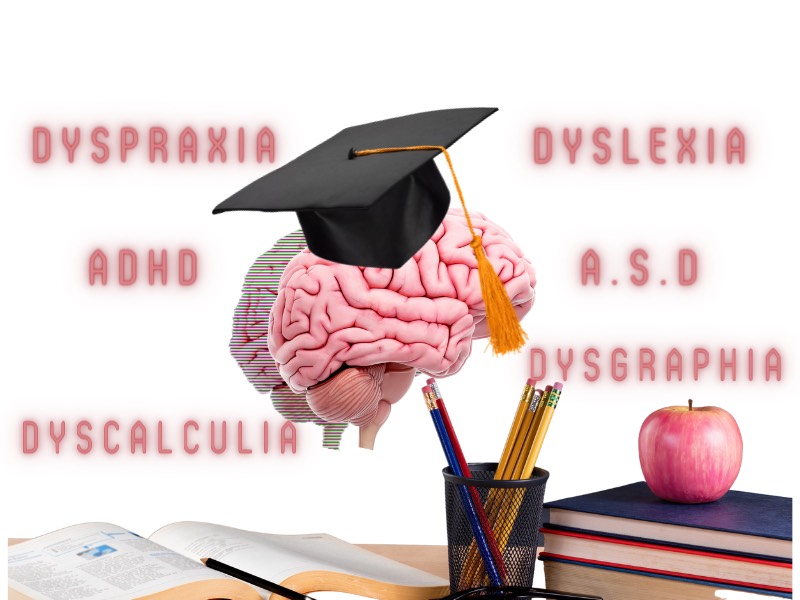 The term ‘neurodiversity’ captures the distinctiveness of human individuals. Because the cognitive ability of human beings varies so much, experiences of disabilities are often unique as well. An extremely wide range of conditions fall under disability. This includes conditions such as dyslexia, dyspraxia, Autism Spectrum Disorder, ADHD and much more.

Within the scientific scope of neurodiversity, disability is often framed from a minority perspective. That is, it is framed from the perspective of comparison of disabled, neurodiverse people, to neurotypical people. However, the universal experience of psychological well being raises unique concerns for those who are not neurotypical.

Mental well being is a deeply personal issue that impacts us all. Mental health is relevant to every individual irrespective of race, gender, age, ethnicity and other identity markers. This widespread impact is evident in education, with the unique experiences of students.

The academic, psychological and social demands of university life bring the issue of mental health to the forefront. Life as a student is hard enough but living at the intersection of being Black and neurodiverse  can make the experience immensely challenging. Nevertheless, conversations around disability and mental health have become more mainstream and prominent in recent years.

The COVID-19 crisis has exposed existing challenges within the learning environment, and exacerbated exclusion, confinement, stress and digital disparities for Black students who are neurodiverse. Moreover, there has been increased isolation and loneliness, during the lockdowns, which have also had a profound effect on mental health and will leave lasting effects on the overall health and wellbeing of students.

1 in 7 people in the UK have brains that function and process information in ways set apart from the majority of the population.

The language surrounding mental health is often co-opted by corporations seeking to build an artificial social awareness, driven by profit. Virtue signalling and shallow discussions aside, disability is an underrepresented factor within mental health conversations.

Beyond this general context, students living with disabilities face significant challenges in maintaining their mental health while studying. This intersection is neglected in the public consciousness, as though it is something that should be tolerated by those plurally disadvantaged by institutional biases.

According to The National Archives, an estimated 15% of people in the UK live with neurodiverse brains. That is, 1 in 7 people in the UK have brains that function and process information in ways set apart from the majority of the population.

These numbers reveal the relative prominence of those with neurodivergent brains, totalling in about 10 million Britons in the UK today. Generally, this shows the importance of innovation and infrastructure to support those with cognitive differences, as they constitute a large minority group. Nevertheless, the gaps in the present educational system means that disability can be a lived experience that demands an immense amount of effort and resilience.

To uncover more about the neurodivergent student experience, I spoke to Black female students who shared the ways that they work through and manage their cognitive functioning, alongside their academic careers.

“It was only until I got a formal assessment and diagnosis that I was able to take steps to manage my life better. I get the stigma of people thinking because I have ADHD ‘oh she’s just indecisive and lazy’ but I realise it’s just ignorance.”

Amani* spoke to me about the impact her dyslexia has had on her academic experience. She said that she felt like there was something ‘wrong’ with her. “Literally since primary school I knew that I absorbed information differently to others. My teachers would often give reports of me having ‘potential’ but could be better organised or more focused. Everything that I experienced told me I had to change things about myself. At university I signed up for therapy, but my counsellor didn’t click for me. Ultimately, I ended up finding academic mentors within my subject who related to my experience and could help me feel less isolated. My needs being recognised also helped me to get extra time for assessments, which helps a lot because I don’t write quickly.”

Khadija* shared her experience of dealing with exams and assessments while living with dyspraxia. “I was never an academic all-rounder so struggling with a few modules didn’t feel like a red flag at first. But in my final year it got to the point where I had to get help to make it through. Luckily for me, there was loads of support with personal organisation at my uni where I could chat with an advisor who would help me plan my time during the week. It was hard but the support I got made things less unbearable.”

Additionally, Tolani* discussed how living with ADHD impacted her organisation at university. “I feel like It’s not the easiest thing to plan day-to-day routines at university when there’s this and that decision to make. On top of doing the work, there’s the added stress of deciding what to do, and when. Working and studying with friends helped a little bit for accountability but it didn’t solve everything. It was only until I got a formal assessment and diagnosis that I was able to take steps to manage my life better. I get the stigma of people thinking because I have ADHD ‘oh she’s just indecisive and lazy’ but I realise it’s just ignorance.”

These young women who shared their experiences reveal the extreme difficulty of navigating a society yet to embrace cognitive diversity. Though they saw varying support depending on what was available at their universities, none of them should have had to experience the barriers they did. Everybody deserves to have the best chance at excelling academically, but institutional failings expose the biases that define our society.

Discussions of disability also have a long way to go. Dissecting the experiences of those with challenges usually reduces their experiences to a sort of forced positivity. That is, media representations of people living with disabilities is often limited to the easily patronising messaging of strength and inspiration.

Moreover, many individuals function differently but fall outside the conditions necessary for a disability diagnosis. Nevertheless, whether students possess a diagnosis or not, the impacts of symptoms endure.

In fact, neurodiverse students often face systemic barriers when entering the working world. According to the Labour Force Survey, disabled people in the UK are over a third less likely to be employed than non-disabled people. And the realities of race can double the barriers to employment. For instance, a Business In The Community survey found that the unemployment rates faced by Black Women are over twice as high as those of white women.

Overall, having a neurodiverse brain makes for an undeniably intense and difficult student journey. The unique challenges of navigating the double bind of racist and ableist systems demand community based and institutional support.

Disability must be factored into the mental health conversation more, to reflect the realities of so many students today. As a result, the solutions that follow will enable university experiences to celebrate, not punish difference.